The most common violations of the right to due process in Egypt are civilian trials in military courts, mass trials, mass death sentences, the widespread use of prolonged pretrial detention, and forced disappearances. Often, though not always, these violations occur in combination, and at times they appear to be politicized, raising serious questions about the political independence of Egypt’s judiciary. Since the April announcement that Sisi had officially secured a second presidential term, the government appears even increasingly emboldened, with flagrant due process infringements against high-profile activists, researchers, and bloggers. The American, German, Turkish, and British governments have expressed concern over Egypt’s politicized judiciary, sentiments which the United Nations Office of the High Commissioner for Human Rights and the U.N. secretary-general have echoed.

Various notable Egyptian activists have been arrested for protesting military trials for civilians, including Alaa Abdel Fattah, Ahmed Maher, Ahmed Douma, and Muhammad Adel. Human Rights Watch estimates that at least 7,420 Egyptians were tried before military courts between 2014 and 2016. In one of the higher-profile cases, scholar and journalist Ismail Iskanderani, who served as a visiting fellow at the Wilson Center, was sentenced to 10 years in military prison in May 2018 because of his work on the Sinai Peninsula, where Egypt is currently engaged in a years-long counter-insurgency battle.

Lengthy pretrial detentions violate Article 9 of the International Covenant on Civil and Political Rights, to which Egypt is a party. As of May 2016, it was confirmed that at least 1,464 people in four governorates were being held in pretrial detention beyond the legally mandated two-year limit. The Egyptian Initiative for Personal Rights described the use of prolonged pretrial as a “tool for political punishment” being used as a replacement for the repealed state of emergency.

The practice of mass sentences within Egypt’s judiciary came under close scrutiny in 2014, after two mass death sentences were issued by a single judge in Minya. In a particularly high-profile case, the supreme guide of the Muslim Brotherhood, Muhammad Badie, was sentenced to death along with 682 other defendants. Condemning the verdict, Amnesty International argued that mass sentences “expose how arbitrary and selective Egypt’s criminal justice system has become.” The Egyptian Foreign Ministry hit back against criticism from the United States and European Union over 230 life sentences issued in February 2015, calling such criticism “unacceptable.” The yearly number of death penalties handed down peaked in 2015 at 538 before decreasing in 2016, yet Egypt has seen another spike in recent months. In late 2017 and early 2018, executions were conducted so regularly that rights activists began referring to Tuesday as “Execution Day.”

A spate of high-profile arrests and disappearances in April and May 2018 has drawn attention to the practice of forced disappearance, which has been on the rise in Egypt since the appointment of Interior Minister Magdy Abdel Ghaffar in March 2015. A report from Amnesty International called the trend “unprecedented,” for its use of violence and extensive number of cases; El Nadeem estimates that three to four people were disappeared per day by security forces during 2017 and the first three months of 2018. Cases documented by Amnesty and other rights organizations show how Egyptian citizens are being abducted, tortured, and held for months without access to a lawyer or the ability to contact their families. This pressure is often used to coerce the victims into confessing to crimes they did not commit. Despite these reports, the government has shown no serious steps to rein in the practice: in August 2016, the deputy minister for legal affairs in the Interior Ministry told a parliamentary committee that claims of forced disappearances are false and spread by the Muslim Brotherhood.

Since 2011, the Egyptian judiciary has worked alongside the state to curb political dissent and exert control over the population and public space, applying justice arbitrarily and submitting to the influence of , rather than protecting citizens’ rights and freedoms despite it. The sentencing of civilians before military courts, mass sentences, mass death sentences, and extended pretrial detention have served as tools to this end.

The recent increase in forced disappearances is particularly worrying, and signals that the practice is used as a matter of routine by Egyptian Homeland Security and the military. Moreover, the return of the state of emergency has empowered the security apparatus to operate without checks on its authority. Following the official announcement that Sisi had secured a second term in April 2018, the regime has further attempted to assert control by force. With a series of disappearances and harsh sentences for internationally recognized activists, journalists, and researchers, the government has indicated that no amount of global renown can protect an individual from the state.

The use of these tactics undermines the rule of law in the country as well as faith in the independence and integrity of the judicial process, and the increasingly expanding web of counterterrorism laws and other provisions supporting such actions are used in worrying combination with blanket state denial of the existence of such problems. Such violations of due process are compounded with the increasing number of executions, which many rights groups have called for halting until improvement is seen in the respect of due process rights and for the rule of law.

[1] The state of emergency had been reinstated in North Sinai in October 2014, but its purview was limited to certain areas of that province. 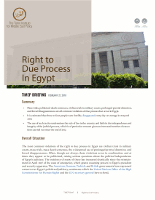