TIMEP released the following briefs in May, all of which are found in this month’s publication:

In addition to this month’s new publications, TIMEP updated the following briefs with new information: 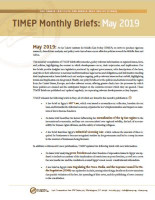