The common court system is made up of three tiers: courts of first instance, courts of appeal, and the Court of Cassation. The structure and jurisdiction of the common court system is determined by the Judicial Authority Law (Law No. 46 of 1972 and its subsequent amendments), the Criminal Procedure Code (Law No. 150 of 1950), and the Civil and Commercial Procedure Code (Law No. 13 of 1986).

In civil matters involving small claims, district courts (also known as summary courts)—which are composed of one judge—hear the case. Appeals to these verdicts are heard by a panel of three judges within the courts of first instance (also known as primary courts).

In civil matters involving large claims, a panel of three judges within a court of first instance hears the case. Appeals to verdicts by such panels are heard by the courts of appeal.

The courts of first instance are defined by Articles 9–11 of the Judicial Authority Law.

Courts of appeal are the courts that review verdicts in civil cases handed down by courts of first instance.

There are eight courts of appeal across Egypt: Cairo, Alexandria, Tanta, Mansoura, Ismailia, Beni Suef, Qena, and Assiut. Courts of appeal are divided into multiple circuits, including economic, commercial, criminal, terrorism, and other circuits.

The courts of appeals are defined by Articles 6–8 of the Judicial Authority Law.

The Court of Cassation is the supreme court of the common court system; it is based in Cairo. It has jurisdiction to review verdicts handed down by the courts of appeal, though its reviews are limited to matters of law. Verdicts are handed down by a panel of at least five judges.

The Court of Cassation also has jurisdiction over the validity of membership in the House of Representatives.

OTHER COURTS WITHIN THE COMMON COURT SYSTEM

Set up to litigate “urgent” civil matters that must be addressed immediately, courts for urgent matters settle disputes that would not be resolved in a timely fashion if litigated through regular courts. Courts for urgent matters have jurisdiction when (1) the case is urgent and there is a fear that procedures may take too long in the court that would regularly have jurisdiction, thus making the matter moot, and (2) an injunction issued in the case would serve as a temporary measure, rather than a ruling on the substance of the case or right involved.

The courts for urgent matters are defined by provisions within the Civil and Commercial Procedure Code.

Family courts have the jurisdiction to hear cases involving family disputes, including divorce, alimony, and custody.

Economic courts have jurisdiction over economic issues in both civil and criminal proceedings, including the stock market, the Central Bank of Egypt, monopolies, intellectual property, and other matters.

Disciplinary courts have jurisdiction over disciplinary actions taken against civil servants working for the government.

The disciplinary courts are defined by Article 15 of the State Council Law.

The administrative courts are defined by Article 14 of the State Council Law.

The courts of administrative justice have jurisdiction over administrative matters, including government contracts and decrees issued by government officials and ministries. These courts hear cases in panels consisting of three judges.

The courts of administrative justice are defined by Article 13 of the State Council Law.

The Supreme Administrative Court is defined by Article 23 of the State Council Law.

The Supreme Constitutional Court has exclusive jurisdiction to determine the constitutionality of laws and regulations, to interpret legislative provisions, and to adjudicate jurisdictional disputes and contradictory judgments. It is based in Cairo and has an independent budget.

Military courts have jurisdiction over all crimes related to the Egyptian Armed Forces and all crimes committed by General Intelligence Directorate personnel acting in the course of duty. Additionally, military courts have jurisdiction over civilians participating in crimes that “constitute a direct assault against military facilities or camps of the Armed Forces, or their equivalents; against military zones or border zones determined as military zones; against the Armed Forces’ equipment, vehicles, weapons, ammunition, documents, military secrets, or its public funds; or against military factories; crimes pertaining to military service; or crimes that constitute a direct assault against the officers or personnel of the Armed Forces by reason of performing their duties.”

Military courts also currently enjoy jurisdiction over crimes perpetrated against public facilities, utilities, and properties, per Presidential Decree No. 136 of 2014 and its subsequent amendments.

Military courts are defined by Article 204 of the constitution and the provisions of the Military Judiciary Law (Law No. 25 of 1966 and its subsequent amendments).

Historically, there were two sets of state security courts in Egypt. Today, there is only one.

The State Security Prosecution, which has recently been quite active in investigating crimes involving issues of national security and terrorism, can refer cases to both the emergency and criminal court systems. In October 2017, the prime minister issued Decree No. 2165 of 2017, which enables the Public Prosecution to refer certain crimes—including but not limited to crimes committed per the Assembly Law (Law No. 10 of 1914), the Protest Law (Law No. 107 of 2013), and the Counter-terrorism Law (Law No. 94 of 2015)—to the emergency state security courts as well.

The Office of the Public Prosecution, headed by the prosecutor-general, is a body that investigates and prosecutes criminal cases.

The Public Prosecution is defined by Article 189 of the constitution and Articles 21–27 of the Judicial Authority Law.

The State Lawsuits Authority is a judicial organization that represents the state in lawsuits filed by or against the state. It also has the authority to propose settlements at any stage of litigation.

The Supreme Judicial Council handles the administrative affairs of the judiciary. It is headed by the president of the Court of Cassation.

The Supreme Judicial Council is defined by Judicial Authority Law.

The Judges Club was founded primarily as a social club for judges and prosecutors within the common courts system. However, the club has at times taken public stances that include advocacy for judicial independence and statements about judicial developments. 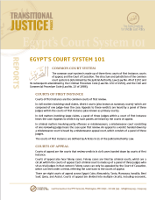