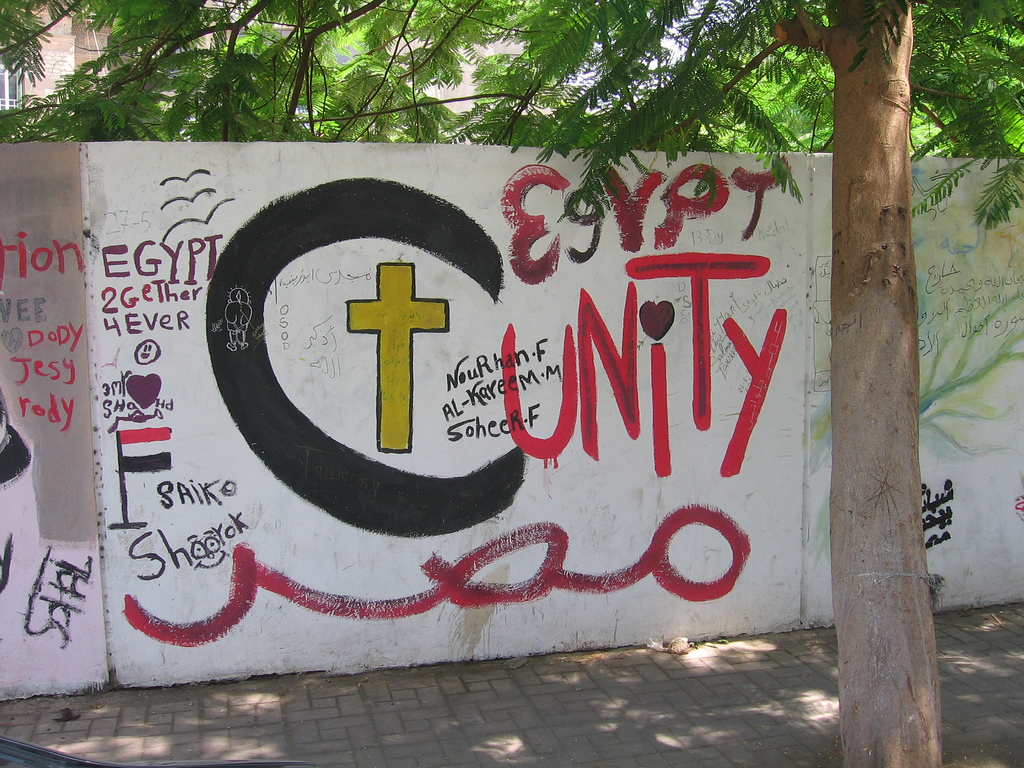 When sectarian violence erupted a year ago in Khesous and led to the unprecedented attack on the Coptic Cathedral of St. Mark, religious and human rights groups condemned the violence. Coptic Pope Tawadros II spoke more forcefully than any pope in memory, taking the government of President Muhammad Morsi to task: “This is a society that is collapsing.” Three months later, Tawadros would appear in the background of several gatherings of senior political and societal figures who had come together to endorse the army’s removal of Morsi after massive unrest began on June 30, 2013.

Nothing about Morsi’s year-long presidency can be characterized as friendly to Egypt’s religious minorities,  not only Copts. In addition to the Khesous bloodshed and subsequent cathedral siege, Muslim-Christian sectarian violence broke out in Dahshur and Zagazig in the summer of 2012; the Dahshur incident prompted around 100 Christian families to vacate their homes. Alber Saber, an atheist and activist, was arrested in September and charted with insulting God, Muhammad, Jesus, Mary, and Gabriel. The influence of Sunni Islam in government and society was strengthened by a constitution written largely by members of Morsi’s Freedom and Justice Party (FJP), the political arm of the Muslim Brotherhood. Government and party responses to protests in December 2012 over the proposed constitution took on a sectarian character. In June 2013, a conference organized by the FJP to support the Syrian uprising included speakers who made several disparaging remarks about Shia, and days later, a mob attacked a Shiite gathering in Giza, killing four. The blatantly sectarian nature of the Morsi era, however, obscured an ugly truth: the Egyptian security services and courts, across several political periods, have systematically failed to support religious freedom, to protect different religious minorities, and to pursue and prosecute those who have attacked them.

Copts are the only religious group aside from Sunni Muslims who have a formal, institutionalized representation integrated within the government. However, this representation has not effectively functioned in a way that has helped or promoted the equal rights of Christian Egyptians. Successive Egyptian governments—the Brotherhood excepted—have generally had an understanding with the Coptic hierarchy: the church refrains from criticizing the government in exchange for having a seat, however small, at the political table. That deal, while perhaps preventing the worst forms of sectarian violence (and certainly any sort of systematic state persecution), never actually led to the consistent protection of Christians’ rights by the state. If anything, it instead led the state to treat Christians as a problem to be managed (and occasionally exploited for the state’s own ends).

Nothing about Morsi’s year-long presidency can be characterized as friendly to Egypt’s religious minorities,  not only Copts

Sectarian violence in Upper Egypt proliferated in the last several years of Hosni Mubarak’s presidency, and the security apparatus maintained what can generously be described as a mixed record when it came to securing convictions. A particularly devastating attack took place in Nag Hammadi in 2010; gunmen opened fire on a church as Christmas Eve services concluded, killing six Copts and one Muslim working as a guard at the church. Though three men were arrested for the killings, just one defendant was found guilty, leading the local bishop to claim, “The court imposed one death sentence because one Muslim was killed, and the Egyptian judiciary wasted the blood of the six murdered Copts, who are of no value to the society.” The Mubarak government frequently organized reconciliation meetings in an attempt to “solve” the various instances of violence without investing state resources in identifying the perpetrators. The Mubarak government’s handling of Coptic relations reached its nadir with the attack on the Church of Ss. Mark and Peter in Alexandria. A bomb went off as worshippers left a New Year’s Eve service, killing approximately two dozen people and wounding scores more. The government blamed foreign terrorists, but no one was ever brought to justice; the Coptic community widely believes that the bombing was part of a conspiracy involving then-Interior Minister Habib al-Adly.

The military government that replaced Mubarak did no better at protecting Christians, and actually antagonized the Copts more directly. Sectarian strife continued to flare in Upper Egypt, but it also struck the area around the capital. A church in Helwan was attacked in March 2011 after an interreligious romance was discovered; several Christians’ homes were also damaged or destroyed. In lieu of prosecuting those responsible, the army immediately offered to pay for reconstruction, thus bolstering its reputation as a generous protector of national unity. When clashes broke out in Giza’s Imbaba neighborhood in May that same year, the police fled as Muslims surrounded a church. In October 2011, a peaceful Christian protest in Cairo—prompted, ironically, by the state’s failure to intervene in an incident in Aswan—was attacked by police and military forces as well as Muslim civilians when the protest approached the state television building. Between 24 and 28 people were killed and nearly three hundred wounded; security forces used military vehicles to run through the crowd of protesters. Presenters on state television called on Muslims to join the army in protecting the building from the Christians. Despite the calls of human rights groups and others, no investigation was ever held regarding what has become known as the Maspero incident.

Unfortunately, the events discussed in this paper are not a complete listing of the sectarian violence that has wracked Egypt in the past few years, and there is no indication of such violence abating anytime soon. Since the removal of the Morsi government, there has been a wave of attacks against Christians, who have too often been left to fend for themselves in Minya, Kerdasa, Delga, and elsewhere in Egypt. It is both depressing and damning to realize that, in the aftermath of so many incidents, there has been no thorough investigation into any state malfeasance—not after the police abandoned Christians in Imbaba, not after the military panicked during a peaceful protest and killed two dozen citizens in front of the Maspero building, not after the police joined an angry mob and besieged an already mourning community. Instead, the state still leans on the Coptic hierarchy for public support—just last month, Pope Tawadros said that now was not the time to worry about civil rights, due to the instability the country faces—and makes certain moves that are both popular among Christians and in service of the state’s larger interests, such as declaring the Muslim Brotherhood to be a terrorist organization.

While decisions are being made in Cairo, poorer Christians, particularly those in rural areas and throughout Upper Egypt, remain vulnerable to kidnappings and extortion schemes. The police and other state forces have done very little to stem the tide of criminal activity targeting Copts; indeed, among the Christian communities in these areas, there are rumors of payoffs and threats made to keep the police off the gangsters’ backs. Despite the church’s efforts to engage with the government on these issues, its members are being ignored.

Egypt’s leaders regularly trumpet the idea that the country is moving toward a bright, democratic future. For that future to be realized, however, the state must both actively protect all citizens, regardless of religion or social status, and bring to justice any and all people—civilian, police, or military—responsible for acts of violence. There are many specific deficiencies in the Egyptian law enforcement system, and any one of them could be the subject of a book-length assessment and set of recommended reforms—the lack of professionalism and discretion in the police force, the insufficient training in investigation methods, the lack of judicial oversight of security forces, and the politicization of trials are but a few of them. More troubling than the existence of the problems themselves is the Egyptian government’s refusal to commit to reform—in fact, in many cases, they refuse either to acknowledge these shortcomings or to investigate allegations of misconduct or dereliction of duty.

These are not simply matters of protecting minority rights, though clearly that is essential to lasting stability, no matter what Egypt’s leaders say. For Egypt to progress to democracy, the rule of law must prevail—not grossly illegal responses to challenges to state authority, not indifference to an event that happens far from the capital. For Egypt’s Christians and other religious minorities to be full participants in a democratic Egypt, the State has to show that it is serious about treating them as full members of society.