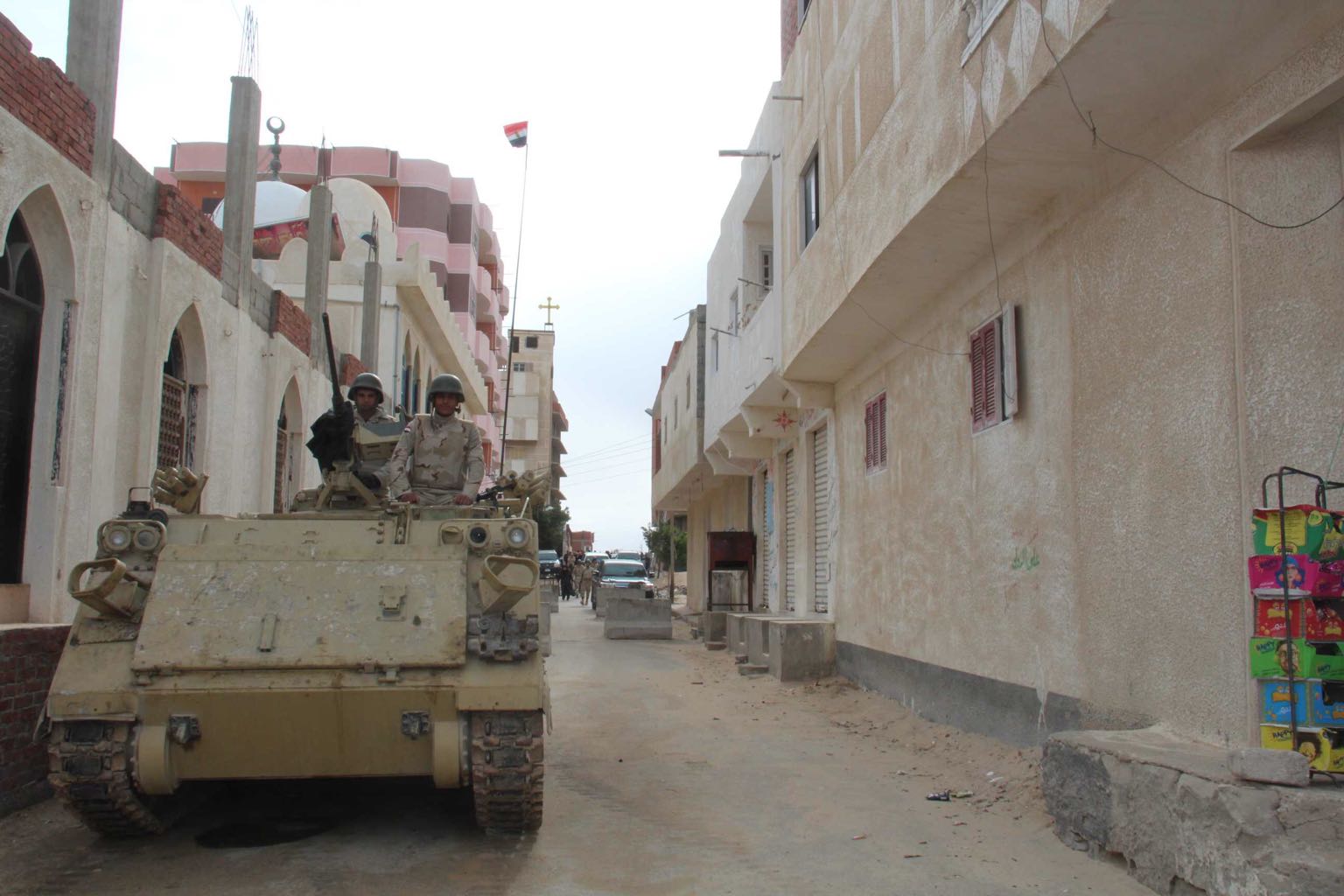 The Egyptian Army guards a street near a church in Arish in 2015.

Over the past three weeks, approximately 140 Coptic Christian families fled the city of Arish, the capital of North Sinai, according to the Egyptian Ministry of Social Solidarity’s office in Arish. The exodus comes after the families were threatened with death by Wilayat Sinai (the Islamic State’s “Sinai Province”) as well as the killing of seven Coptic individuals in armed attacks by the group this February. Three of the victims were killed by Islamic State militants in Sinai, whether at work, at home, or while out on the street, between February 1 and February 18.

On February 19, Wilayat Sinai released a video online claiming responsibility for the attack on the Church of St. Peter and St. Paul in Cairo, carried out by a member of the terrorist group using belt explosives. The attack, which occurred on December 11, 2016, resulted in dozens of civilian deaths and casualties who were praying in the church at the time. In the same video, the group also announced that Egypt’s Coptic Christians would be its prime enemy and target in the future.

After the video’s release, the rate of attacks on Christians in Sinai increased, with four others killed in the following week, bringing the total to seven fatalities in February alone. Shooting was not the only method used for these attacks; some victims’ bodies were set on fire after they were shot, while others were burned alive and their homes set on fire.

These attacks led to a spread of terror among North Sinai’s remaining Coptic families many of whom decided to evacuate their homes in Arish altogether. A number of families escaped to their home cities in the Nile Valley and Delta, while others have taken refuge in the city of Ismailia along the Suez Canal, about two hundred kilometers away. In Ismailia, the evangelical church opened its doors to receive the refugees, providing them with a place to stay. The governorate of Ismailia also made the city’s youth hostels available to house dozens of families, while some displaced families rented homes to stay in.

Meanwhile, an official from the governorate of North Sinai stated that the province had given all its Coptic public sector employees a month of paid leave due to their fear of staying in the city, pending a resolution. The ministers of education and higher education have ordered universities and schools to facilitate the transfer of Coptic students to new schools outside the peninsula. The governorate, however, refused to designate the situation a mass migration, questioning the number of families that have left and claiming that there were no official statistics of the number of Coptic families that have fled the city. Officials did confirm that most Coptic government employees have applied for transfers to positions outside North Sinai.

Local Egyptian government sources have said that the provincial administration was in constant contact with Coptic Orthodox Pope Tawadros II, North Sinai Governor Sayyed Abdel Fattah Harhour, and several cabinet ministers to monitor the crisis. The health ministry announced free healthcare cards for all the fleeing Coptic families, valid for treatment at any governmental health clinic or hospital. In addition, Egyptian state television announced that the housing ministry has made free housing units in the al-Mostaqbal neighborhood in Ismailia available for Coptic families fleeing North Sinai, as well as the formation of a special operations headquarters to monitor the situation.

Security officials have told journalists in Arish that their forces were exerting all efforts necessary to identify the attackers. Eyewitnesses from Arish have stated that the air force has carried out attacks on targets south of the city that could be heard across the city over the past three days.

Angel Gerges, a refugee from Arish now staying at a youth hostel in Ismailia, said, “My husband, Ateyya Shehata, was a retired army officer who fought in 1967 and 1973 [against Israel]. He was taken from us by terrorists during an attack on a fire station on February 19. He was a staunch supporter of remaining in Sinai, refusing to leave up until he was killed.”

Nabila Fawzy, who also escaped to Ismailia, said, “Three armed men came knocking on our door late one night. They killed my husband and son and set their bodies and the house on fire and escaped after stealing the ring I was wearing on my finger.”

Seifeen Morcos, 89, said that his family was one of Arish’s longest-standing Coptic families and that he fought in the Yemen war in 1965 as well as in 1973. “We lived under Israeli occupation for 12 years. Nothing like what is happening to us these days ever happened to us during that time. I had to leave Arish because I’m Christian and that’s not fair.”

The targeting of Christians in North Sinai (who numbered about 600 families in 2011) started with the beginning of the January 25 Revolution in 2011, when Islamist extremists burned the Church of the Holy Family in Egyptian Rafah, pillaged its contents, and painted hate speech and calls to violence on its walls. Extremists also began handing out fliers in the city demanding that the city’s Copts leave or they would have only themselves to blame. In that time, Magdy Lamei, a Coptic resident of Sheikh Zuweid, was beheaded. Father Youssef, the church’s priest, said in 2014, “I left Rafah along with all the city’s Christians to live in Arish, and we have not been able to pray in Rafah since 2011. I have received numerous threats from anonymous callers on my phone.”

After the removal of the Muslim Brotherhood from power in July 2013, armed individuals burned one of Arish’s three churches, and violence against Christians in North Sinai spiked. That summer, Coptic priest Mina Aboud was killed near his church. Attacks against Christians have been sporadic from then until this month, but the overall rate and severity of attacks in North Sinai has increased, leading Christians to first leave Sheikh Zuweid and Rafah completely to live in Arish, and to now leave Arish and the whole Sinai Peninsula altogether.

With the attacks starting in 2011 and growing worse in 2013, a number of North Sinai Christians decided to hide their identities. The women started wearing veils and covering their hair, and stopped making the sign of the cross or praying in church for fear of attacks In the summer of 2016, Coptic priest Rafael Moussa was shot dead, and Wilayat Sinai kidnapped several Sufi sheikhs and beheaded a Sufi and an imam employed by the Ministry of Religious Endowments, in an apparent escalation of the sectarian aspect of the violence.

A number of analysts and Christian faith leaders have criticized the government’s security policies to target terrorists over the past three years, saying the government’s efforts have led to armed extremists spreading from Rafah and Sheikh Zuweid to Arish, increasing attacks there. Security forces were unable to protect the city’s Copts in spite of the numerous checkpoints and security stops spread across the city’s streets. Father Gabriel, the representative of the Coptic Orthodox Diocese of North Sinai, said, “The withdrawal of the army from downtown Arish was a catastrophe since the police is no longer able to keep the peace.” He also expressed his disappointment at the lack of any message of condolence from security leaders to the city’s faith leaders or any communication with the city’s churches to monitor the crisis.

Meanwhile, some locals fault the double standard in handling killings, escapes from Sinai, and transfers of students to schools outside the region, which they say are based on religion. They accuse officials of excessive concern for the migration of dozens of Coptic families, providing shelter and healthcare, while at the same time not expressing any concern for the killing of citizens who cooperate with the security forces in their war on terror and the migration of thousands of families from Sheikh Zuweid and Rafah.

An official statement from the governorate of North Sinai said, “The number of refugees reached 21,861 from the areas of military operations in Sheikh Zuweid and Rafah as of August 2016.” Most of these refugees live in small huts and shacks in Sinai’s desert regions. According to Dr. Hossam Refai, a member of parliament, “About 400 citizens who have cooperated with the armed forces on their war on terror were killed in the most heinous ways, a lot of which was filmed and broadcast by Wilayat Sinai. The government has shown no concern for those killed or their families, clearly showing its duality in dealing with citizens.”