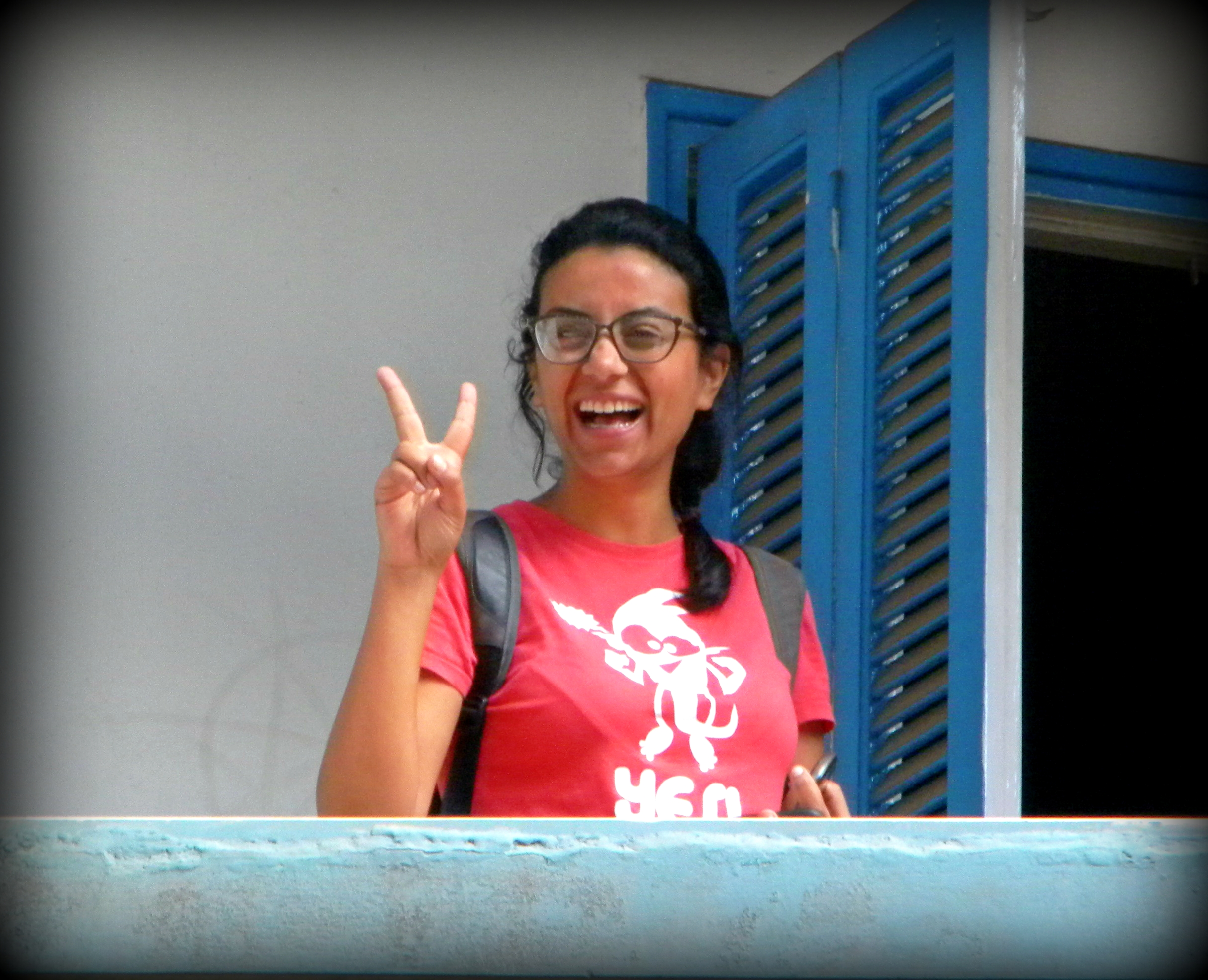 Whenever I go to Alexandria, the first thing I do is call my friend Mahy—Mahienour Elmasry—who to me represents revolutionary idealism in its purest form. I like to meet her at this nice café right by the Mediterranean—a place for tourists, to be sure, but I cannot pass up sitting by the sea on my brief trips to the city. Mahy usually says something like, “I have to go to this workers sit-in, but I’ll come and join you there afterwards.”

Mahienour is now serving her second week of a two-year prison sentence (levied in addition to a 50,000 EGP fine) for protesting. The protest in question, held during one of the court sessions for the 2010 murder of martyr Khaled Said, was in support of Said’s family. Said was brutally beaten to death by two police informant; his death became one of the main sparks of Egypt’s 2011 revolution.

I first met Mahienour in June 2011 as she spoke on the first Tweet Nadwa to be held in Alexandria. Activist and blogger Alaa Abdel Fattah—who would himself later be arrested for violating the same protest law as Mahienour—had started “Tweet Nadwa” earlier that month, and it became an instant hit. The informal gatherings, where guests gave a brief introduction and the audience gave their input in under 140 seconds, was most popular when held with people sitting on the ground in Tahrir Square. Mahienour used her time in that first Alexandria Tweet Nadwa to vividly portray her own experiences with activism, and I must say she blew my mind.

I was new to activism myself. As an academic, I had been “researching” online activism as my primary research specialty for years, but I had never been an activist myself—I had preferred to maintain my “objective,” scientific outlook on things. Seeing this girl—who is more than a decade my junior—talk passionately about how she became involved in politics as a teenager was an eye-opening experience. Mahienour became an activist because she hates injustice. It’s that simple, and that beautiful. Mahienour felt for the poor and the marginalized, and decided that she must stand by them any and every way she can. The beautifully self-confident, one-eyed girl once told us the story of how, as a kid, she heard two women talk about her from the back seat of her father’s car. As one woman lamented the fact that the kid was one-eyed, the other noted that the kid was “in a car,” adding, “I don’t mind them taking away my eye and giving me a car.” What could have been a psychologically traumatizing encounter touched Mahienour on a very different level. It served as a constant reminder of how painful poverty is, and made her want to do something about it.

The beauty of Mahienour, however, is that she does not just go to a worker’s sit-in—she actually knows many of the workers by name and personal story. For her, it is not only a just cause, which would have been beautiful enough; it is a just cause with thousands of personal stories behind it, stories that she knows all too well and that she identifies with as if they were her own. At any protest, she tantalizes the crowd. This relatively small girl has a big voice, and she leads the chants powerfully and with feeling. She always does, whether it is a protest for factory workers or for someone like Khaled Said. With her trademark backpack and her distinct vertical clap, Mahienour ignites the crowds, and that’s why she is currently in prison. One of the clips that went viral after the revolution on Egypt’s popular evening talk shows showed her at the second ever Khaled Said protest in Alexandria, shouting off the top of her lungs, “Unite ye people, shoulder to shoulder; Down down with Hosni Mubarak.” That was months before January 25, 2011, long before “Down down with Hosni Mubarak” became a popular chant. Mahienour’s voice carried it loud and clear. How ironic that it is that same cause, a very similar stand, that is the reason she is in prison today. Mahienour simply refuses to be silent against injustice on all levels.

I talked to Mahienour on Twitter on the day that her two-year sentence was confirmed; as a matter of fact, her response to me is still the last tweet on her account. She was waiting for the deliberations to end, and joked about why it was taking so long. In the tweets right before that she pointed out (in Arabic) the bitter irony in the situation before her, “In 2006, I was a naïve kid going on protests for an independent judiciary behind my parents’ back because I believed it was important. Haha…We used to protest during Mubarak’s days in support of a judiciary that is now sending us to prison for protesting, now under a regime that came to power through protests…hahahahaha.”

Her last post on Facebook says a lot about the angelic person that she is. She wrote a lengthy piece addressing why she was going to voluntarily appear in court the next day, knowing that she might very well be sent straight to prison. “This case has a personal aspect for me,” she wrote (again in Arabic), explaining that there are four young men (Louai Elkahwagy, Omar Hazeq, Nasser Abou El Hamd, and Islam Hassanein) already in prison with two-year-sentences and 50,000 EGP fines in the same case. Although they are all innocent, she said, one in particular—19-year-old Islam Hassanein—happened to be passing by the protest by pure coincidence: “He does not even know Khaled Said.” Islam’s father was so crushed about his son’s two-year sentence that he fell sick and died weeks later. “Islam,” wrote Mahienour, “is my main weak point. I can’t, at least on a psychological level, not go through what he had to go through.”

“I wish I could run and hide,” she continued, “but the truth is I can’t. I have to face this. It’s a confrontation where the balance of powers is not in our favor, but it is important mainly for my psychological well-being, which is beginning to wane…It’s a confrontation so that if we deserve to be punished for dreaming of a better life for humanity, we better take it. If someone was charged in a court case and asked me whether or not to go, I’d advise them not to go, not to put their future in the hands of a judge who awaits a telephone call from the regime [for the verdict], but unfortunately, on a personal level, I will not be able to do that.

“We’ve said it before: We don’t like prisons, but we are not afraid of them. There are thousands of innocent people who belong under the sun, not in prison cells, but we will continue with our attempts under any and all circumstances.”

My friend Mahienour is not a criminal; she is a hero. She does not belong in prison, and neither do thousands of innocent souls currently behind bars in Egypt. Mahienour exemplifies humanity in its finest form, and reminds us of how little we do for others every day when it’s dwarfed by what she does and never deems enough. No wonder thousands of workers and activists, not only in Egypt but as far and wide as Brazil, Austria, Italy, and Germany have taken a stand in solidarity with her. We demand freedom for the best and purest amongst us. We demand freedom for Egypt and its revolution. We demand freedom for Mahienour and her colleagues, and all others who are unjustly imprisoned. #FreeMahienour