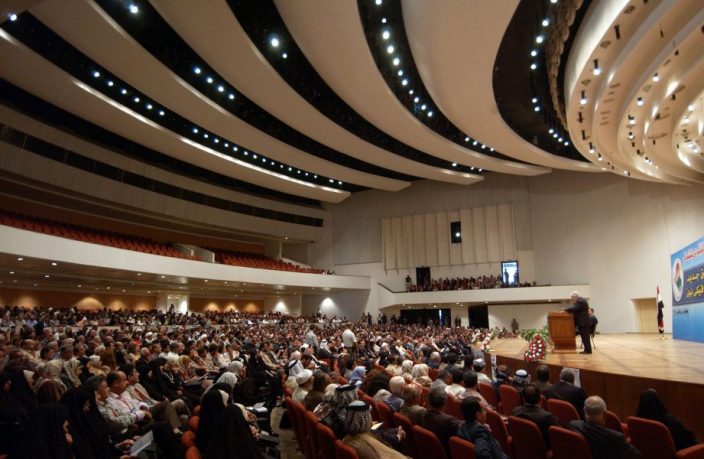 The Baghdad Convention Center, where the Iraqi parliament meets (photo by James Gordon, via Wikimedia Commons)

The results of Iraq’s parliamentary elections this month took many by surprise. Populist Shi’ite cleric Muqtada al-Sadr’s coalition won a plurality of 329 seats, followed by three other lists dominated or led by Shi’a. This left Kurdish parties with 61 seats and the strongest Sunni coalition with only 13, revealing deep divisions among Sunnis and Kurds, and showing how those divisions—along with the quest for Kurdish statehood—have diminished Kurdish influence in Iraqi politics.

In 2010, serious disagreements took place between the State of Law coalition led by Nouri al-Maliki, who was then prime minister, and the Iraqiya coalition, led by Vice-President Ayad Allawi. It was the Kurdistan Region’s president, Masoud Barzani, who invited them to Erbil to resolve the crisis, which they did. No Iraqi prime minister has been elected without Kurdish backing since 2005, and Ibrahim al-Ja’fari was forced to resign after Kurdish criticism. In addition, when Maliki sought his third term, the Kurds objected, along with some Shi’a and Sunni parties. The Kurds, then, were the kingmakers of Iraq, partly because the Sunni and Shi’ite parties were divided. Now, it is the Kurds who increasingly divided, in a situation reminiscent of the 1990s civil war between the Kurdish Democratic Party (KDP) and Patriotic Union of Kurdistan (PUK).

This year’s election is not a large change from the previous parliament: Kurds have lost only two or three seats. But quotas of minorities have increased, which has compensated for them. In the previous parliament, the Kurds were going to Baghdad in a united list. For the first time since 2003, the Kurdish political parties are sending separate delegations to Baghdad to discuss forming the new Iraqi cabinet, with the KDP—which emphasizes Kurdish unity—dispatching its delegation on May 22.

While the Iraqi parties have started discussing scenarios for forming the new cabinet, Kurdish parties are still discussing the legitimacy of the election results. Interestingly, there have been more rejections of the election results or allegations of fraud in the Kurdistan region than in other parts of Iraq, with threats of boycotting coalition talks if their concerns are not addressed.[1] Not only that: 14 PUK candidates released a statement criticizing the PUK for changing the results of the votes in favor of other PUK candidates, and have called for opening some ballots to manual recount. Major Shi’a and Sunni parties in Iraq seem to have accepted the results—Abadi has already congratulated Sadr for the victory of al-Sairoon, even though a low turnout of 44.52 percent and allegations of vote rigging leave major questions about the legitimacy of the next Iraqi cabinet. However, the Wataniyah bloc, led by Allawi, has also questioned the results.

Kurdish opposition parties were expecting to win a majority of the votes in Sulaimani and Erbil and at least two seats in Kirkuk. Their expectations were not realized because of election fraud, low turnout and boycott by non-KDP and PUK voters, inability to form a coalition and unwillingness to join one of the major Iraqi coalition (even though joining Abadi’s would have improved turnout), and failure to gain support from the United States or Iran. These losses were also due to lack of response to major events of the past two years such as the referendum, subsequent protests, and fall of Kirkuk, and failure to offer an alternative to deteriorating relations with Baghdad.

Going forward, forming the new cabinet in Baghdad will be challenging for all sides. Creating a parliamentary majority is tough to begin with, as none of the Iraqi parties have secured a majority. Moreover, the U.S., Iran, and Saudi Arabia will be vying for influence in Baghdad, with Iran seeking to bring the Iraqi government closer following the U.S. withdrawal from the nuclear deal, and the U.S. and Saudi Arabia seeking to check Iran’s influence, especially after it seems to have benefited from the Lebanese elections. Finally, according to a conventional interpretation of the Iraqi constitution, the new cabinet will need to be supported by Shi’ites, Sunnis, and Kurds alike, and must not be based on sectarian and ethnic lines.

Kurdish parties will not be united in Baghdad even though opposition parties have not won enough seats to be decisive in the cabinet formation. Yet Kurdish parties may still play a role. Sadr has called for a forming a coalition government beyond sectarian lines (as has been the case with previous Iraqi governments) and suggested the KDP and Gorran could be partners. Soon after that, Masoud Barzani and his nephew, Kurdistan Region Prime Minister Nechirvan Barzani, of the KDP, held phone conversations with Sadr to extend their congratulations on his coalition’s victory. As it stands, the two main scenarios being discussed in the Kurdistan region are a cabinet considered pro-American and one considered pro-Iranian. The first would include the coalitions of Abadi’s al-Nasr, Sadr’s al-Sairoon, Allawi’s al-Wataniyah, and al-Qarar, along with the KDP and some Kurdish opposition parties; the latter, al-Fatah (affiliated to the Popular Mobilization Forces), Maliki, the PUK, and some Sunni and Kurdish opposition forces.

While the Kurds have lost the influence they once had, they are still one of the main players in the coalition-building process. Both the KDP and PUK are in a position to offer the appearance of Kurdish support to whichever list is able to form a government. The smaller parties have learned that they need to form a strong coalition ahead of the Iraqi Kurdistan parliamentary election in September in order to compete effectively with the two major Kurdish parties, both regionally and federally. Even though Kurds may no longer be the kingmakers of Iraq, Kurdish voices will continue to be heard in the new government.

[1] The KDP has rejected results in Sulaimani and the PUK in Duhok, while smaller Kurdistan region parties accuse the KDP and the PUK in particular of rigging the elections—an accusation that the PUK has denied, with the PUK 70 Division of Peshmerga even raiding the main Gorran headquarters in Sulaimani. The Kurdistan Islamic Movement and Kurdistan Communist Party rejected the results and called for redoing the elections. The Turkmen and Arabs of Kirkuk have also denounced the results there. All parties other than the KDP, the PUK, and the New Generation Movement are threatening to withdraw from federal government-forming talks and to form an electoral alliance for Kurdish parliamentary elections, scheduled for September, if their complaints of vote rigging are not investigated.