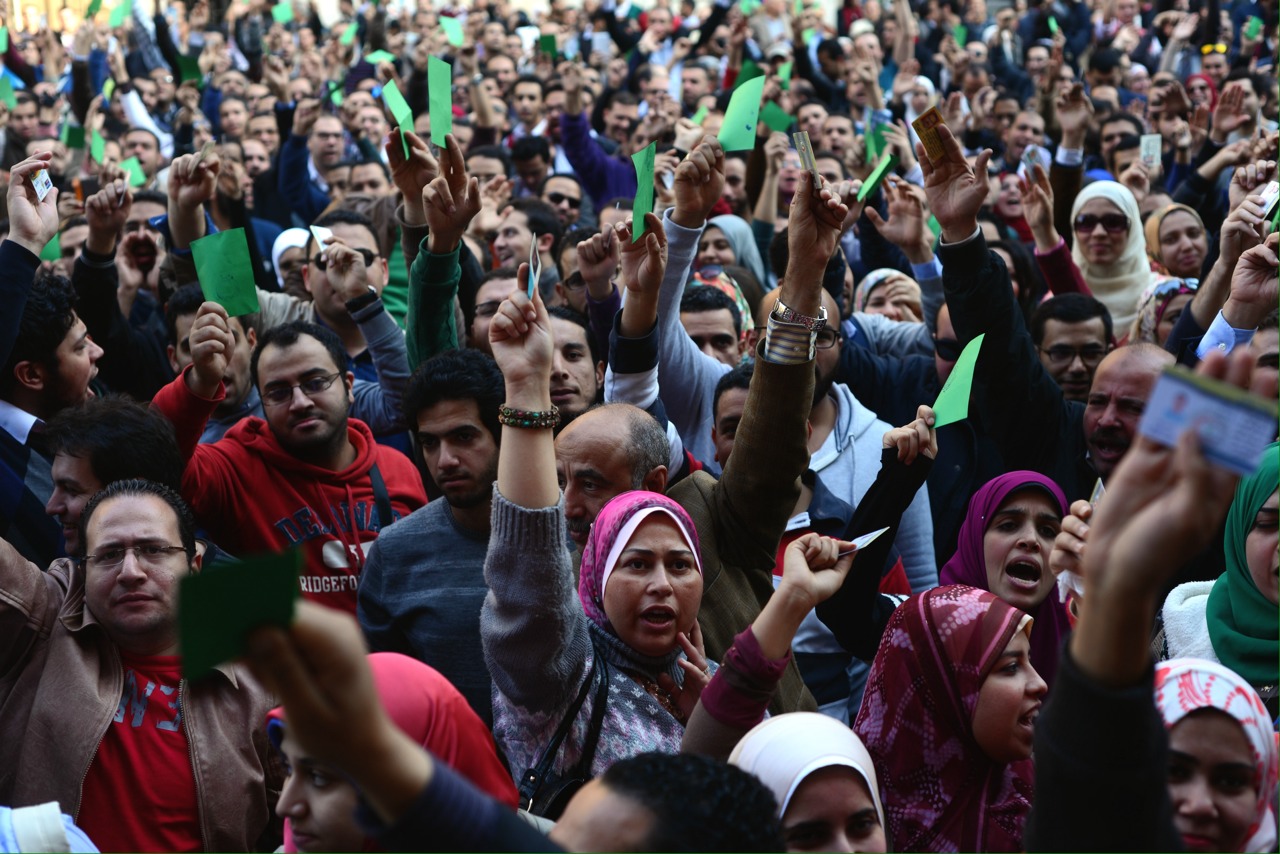 Editor’s Note: On January 28 of this year, an incident at Matariya Teaching Hospital sparked a conflict between the Egyptian Medical Syndicate and the Egyptian Ministry of the Interior that is still ongoing. Doctors—complaining of police and government intervention in hospitals—have organized a number of demonstrations to express their discontent. In the piece below, Dr. Hani Hodaib explores the history of the doctors union’s relationship with the state, especially since the 2011 revolution. This is the first in an occasional series of articles on political expression in unions.

Since its inception in 1940, the Egyptian Medical Syndicate (EMS)—the government-recognized union of doctors—has been a semi-governmental organization existing primarily to help the Ministry of Health in conferring licenses to physicians in Egypt. The 1969 law regulating the union does not provide for syndicate independence, doctors’ rights, or rules regulating labor relations between doctors and business owners, or between health care providers and recipients of the service. In addition, many important decisions made by the EMS executive council or the general assembly require the Ministry of Health approval to be put into effect.

In 1990, elected officials from several different syndicates—including EMS—held a conference in EMS headquarters in Cairo to call on then-President Hosni Mubarak to resign his position as head of the National Democratic Party, cancel the emergency law, lift restrictions on freedom of expression, and hold fair and free elections in Egypt. As a result, the Mubarak regime enacted a new law in 1993 which froze elections and most activities in these trade unions. It took these unions 18 years of litigation to finally defeat this legislation in court in January 2011, a few days before the Egyptian revolution erupted. The court decision restored the 1969 law and allowed new EMS council elections to finally take place.

In the wake of the revolution, the first syndicate election in two decades was set to be held on October 14, 2011. While a number of syndicate members were eager for a change, the syndicate structure makes it difficult for independent members and internal factions to compete with large organizations that are active both within and outside labor unions. The syndicate’s 24-seat council is elected at the national level, thus requiring blocs to have a strong organization and substantial resources to compete for multiple seats. Such advantages were available in 2011 only to government-backed candidates and the Muslim Brotherhood (which had been able to overcome the legal and security constraints that marginalized many other political movements).

These legal restrictions and security arbitrariness mirrored those that faced civil society organizations prior to 2011, and impeded any attempts to improve doctors’ work conditions or improve deteriorating health care services. However, in an unpromising situation, a small group within the union called the Doctors Without Rights Movement was able to work within the EMS. Doctors Without Rights recruited a few dozen of right activists to apply pressure on both the syndicate council and the state to act on the neglected doctors’ demands. The group, which started in 2007 as small trade union group, has quickly become a broad, effective movement, not only holding a majority on the EMS council but also having a deep impact on elections in other unions as well.

Structural factors contributed to Doctors Without Rights’ success, many of which can be attributed to the popular mobilization of January 2011 and the subsequent divided public sphere. Doctors Without Rights had benefited from its members’ position at the forefront of the revolution, as many of the doctors had an important role in the establishment of the field hospital in Tahrir Square during the early days of the 2011 protests, providing medical staff, equipment and supplies to treat the injured revolutionaries. This, in particular, contributed to a rapid rise of the movement’s popularity, especially among doctors, and helped the movement to recruit even more activists.

In the wake of Mubarak’s overthrow, the political and social openings of 2011 enabled Doctors Without Rights to gain grassroots support outside the capital, something that had not previously been possible for non-Islamists. Simultaneously, many pressure groups were formed within EMS as members’ engagement spiked, raising demands regarding unsafe work conditions, low wages, and little spending on health services. Doctors Without Rights was in the forefront of these groups calling for a strike, which was agreed upon in the March 25, 2011, general assembly session. On the other hand, the Muslim Brothers—who held a majority in the EMS council at that time and remained the main organized power in EMS general assembly—were trying to prevent an escalation in opposition to the Ministry of Health, as the Brotherhood was generally cooperating with the ruling Supreme Council of the Armed Forces and aiming to promote stable governance. In other words, the Brotherhood faction in the EMS acted as authoritarians rather than union activists, a behavior that tarnished their reputation.

Despite winning only five seats out of 24 in 2011 EMS council elections, Doctors Without Rights movement has already established itself as the main opponent of Muslim Brotherhood within the syndicate, and its electoral list, Independence Current, became a banner for all non-Islamists in EMS and in other trade unions as well. Later on, fueled by political and social polarization against the Brotherhood, Doctors Without Rights” won 11 of 12 seats up for elections in 2013, the last EMS elections that the Brotherhood participated in. While the win can be interpreted as an anti-Brotherhood vote, it cannot be denied that Doctors Without Rights has become a deeply rooted movement capable of mobilizing its supporters. Doctors Without Rights’ slate of candidates won 2015 EMS elections against a pro-state electoral list, and when the movement successfully called for an emergency  general assembly session to take action regarding police abuses against EMS members in early February.

Doctors Without Rights, now controlling the EMS council, faces tough challenges. While grassroots supporters feel that syndicate leaders are not radical enough, pro-government doctors— who are well-represented among professional leadership—try to impede reforms or escalation attempts. The ultimate challenge, though, remains the fear of uncalculated escalation against a regime that is determined to sweep away all 2011 mobilization political and social gains. So far the movement successfully confronted these issues. However, prevailing in such a battle depends on much more than what is happening within EMS, as the doctors’ struggle cannot be seen apart from the broader democratic struggle or the political crisis in Egypt.