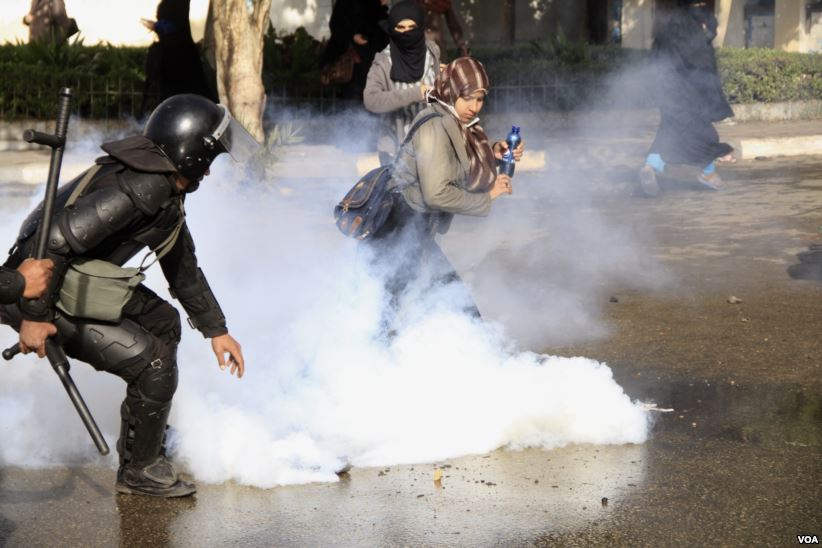 Women and police dodge tear gas during a protest at Al-Azhar University in Cairo, Dec. 11, 2013. Photo Courtesy of Hamada Elrasam for VOA.

The day after a court dismissed the charges against former president Hosni Mubarak for killing demonstrators, Egypt did not see the mass demonstrations that have normally accompanied similar setbacks. Although a protest did materialize the night before near Tahrir Square, security forces dispersed it within a few hours, killing two people in the process. This has become what seems like standard procedure for dealing with public protests. However, there is still one place where protesters have stood their ground despite crackdowns— the university.

Students from across the political spectrum staged demonstrations at universities throughout the country, with some garnering relatively high turnout. How were university students able to organize protests when nearby public spaces were completely shut down? And were these protests organized by the Muslim Brotherhood?

Students versus the State

“We can’t view what is happening at universities as separate from the general political environment, but it is different inasmuch as the university is a different public domain,” said Karim Ennarah, a researcher at the Egyptian Initiative for Personal Rights.

“Students mobilize easier, are more radical, and are more difficult to oppress,” he added, pointing out that government regulations on campuses have made it more difficult for universities to carry out their primary function – education.

“Last year there was very little in the way of education at universities,” he said. “Many lectures were cancelled and exams were postponed. In addition, the quality of education, which was poor to begin with, got even worse,” added Ennarah. He anticipates that universities will continue to face problems providing education now that there is heightened focus on student demonstrations.

As university protests continue into the second consecutive academic year, the government officials and university administrators have intensified their efforts to curtail demonstrations and political activism on campuses. President Abdel-Fattah El Sisi issued a decree allowing the expulsion of staff and students involved in “acts that obstruct the educational process or undermine the status of Al-Azhar University,” the most prestigious religious university, which has also been the site of some of the most vicious clashes between students and security forces over the past two years. In addition, the government hired Falcon, a private security firm, to maintain security at 12 universities for the price of EGP 5 million per month.

Meanwhile, Cairo University banned politically affiliated student groups, and, after a meeting of the High Council of Universities, the President of Cairo University, Gaber Nassar, reported that students expelled from government universities would not be permitted to apply to private universities.

Is the Muslim Brotherhood behind the Protests?

The Muslim Brotherhood has actively backed university protests alongside off-campus protests in support of former president Muhammad Morsi. “There was always an active student movement, even before January 25,” said Amr Abdel Rahman, a political analyst and lecturer at the American University in Cairo’s law department. “Students don’t like traditional political procedures and tend to prefer the politics of protesting.”

Abdel Rahman also pointed to a change of the Brotherhood’s tactics since the onset of Egypt’s transition almost four years ago, and particularly after the forceful crackdown on protests in Rabaa Square of pro-Morsi demonstrators. “After January 25 and before the Rabaa massacre, the Muslim Brotherhood used to be conservative, and did not protest at universities,” he said. “However after Rabaa, the Muslim Brothers succeeded in exploiting the politics of protesting in universities to accommodate their new situation,” he added. “The post-Rabaa Muslim Brotherhood is no longer conservative politically, although they are still ideologically conservative.”

Ahmed Al-Gharbawy, a student at the Faculty of Sciences at Cairo University, has participated in demonstrations although he does not identify with pro-Brotherhood students. He believes that posters bearing the party logos or the symbol of the Rabaa massacre do dissuade others from participating.

“I protested when a friend from my college and Mohamed Reda [a Cairo University student who was killed last spring] were both martyred. We agreed that it would be a protest without political signs,” he said. “There were even pro-Sisi students that came out with us to protest what the Ministry of Interior was doing. If I see anyone holding up signs for the Brotherhood or making demands that I don’t agree with, I leave,” he added.

“After the Mubarak verdict was announced, it was clear that many people wanted to protest but they were still worried about the Brotherhood. They still don’t want to be on the same side as the Muslim Brotherhood,” Abdel Rahman said.

“It is a big problem for the democratic opposition – since it made an alliance with the Muslim Brotherhood, it could lose support from those who don’t trust the Brotherhood anymore,” Abdel Rahman said. “Protests at the university epitomize this problem because it’s really hard to distinguish the pro-Brotherhood students from the liberal democratic students.”

Violence and Crackdown on Campus

During the past academic year, at least 16 students were killed in violent confrontations with security forces. The Association for Freedom of Thought and Expression (AFTE) also reports that as of November 2014, at least 895 students arrested during the previous school year remain in detention. Hundreds of others have been suspended or expelled from their universities for their involvement in demonstrations.

On the first day of the semester, students clashed with Falcon security guards at Cairo University, destroying metal detectors that had been installed at campus entrances. Five days into the new semester, at least 195 students had been arrested. Protests proceeded as planned and police stormed the campuses of Al-Azhar, Alexandria, Sadat, and Zagazig in the first week alone. By AFTE’s count, at least 215 students have been arrested this school year and remain in detention, putting the number of students who remain in Egyptian jails well over one thousand. The first fatality of the academic year occurred on October 21, when Alexandria University student Omar Al-Sherif died as a result of birdshot wounds to the head, which he had sustained in a confrontation one week earlier.

Despite the violent crackdowns, student protests have not completely disappeared, although the state is nonetheless determined to continue cracking down. Since the beginning of the academic year, students have flooded social media with images showing lines of police officers and vehicles just beyond the university gates.

The aftermath of a pair of attacks in Sinai that killed 33 also saw intensified security measures, which have affected students. After the attacks, Sisi issued a decree expanding the scope of military trials for civilians, which is permitted by the 2014 constitution. The decree states that those who attack “vital facilities” will be referred to military tribunals, which run in parallel to the country’s civil judiciary. Among the vital facilities listed in the new law are electricity and gas lines, railways, roads, and bridges. Courts have sentenced dozens of students accused of blocking major roadways around their respective universities.

While university demonstrations have outlived general protests, the state’s growing control of campuses and its crackdowns on student activism jeopardizes the longevity and impact of student protest movements.

“After June 30 [when the military took power from former president Morsi], the government wanted to close off public space, whether it be inside or outside universities,” said Mohamed Nagy, a researcher on academic freedom at AFTE. “It managed to do this outside universities, but until now, it hasn’t been able to do this inside the university gates,” he added.

Nagy, who acknowledges that some students have undertaken violent actions against security forces and campus security, said that the use of violence had been limited to specific events and on a relatively small scale.  He added that violence has generally been retaliatory, in response to excessive force used by security forces. Nonetheless, the media had been able to exploit these incidents to paint an exaggerated picture to justify the Ministry of the Interior’s increasingly oppressive practices.

While protests at some campuses have continued, security forces have managed to contain demonstrations in other areas, including those that had previously been epicenters of student activism, including Cairo University.

“The numbers of those supporting the demonstrations are declining,” said Al-Gharbawy, citing the heightened security presence. “People are saying that we won’t be able to protest anymore and we can’t gather,” he added.

Egypt’s transition has not been kind to vocal opposition. That more than a thousand students that remain in detention and its violent crackdowns on university activism serves as a reminder of that.

University demonstrations face many of the same problems that other protests have. However, the student protests against the court’s decision in Mubarak’s case also showed that student demonstrations are harder to suppress and are likely here for the long-term.