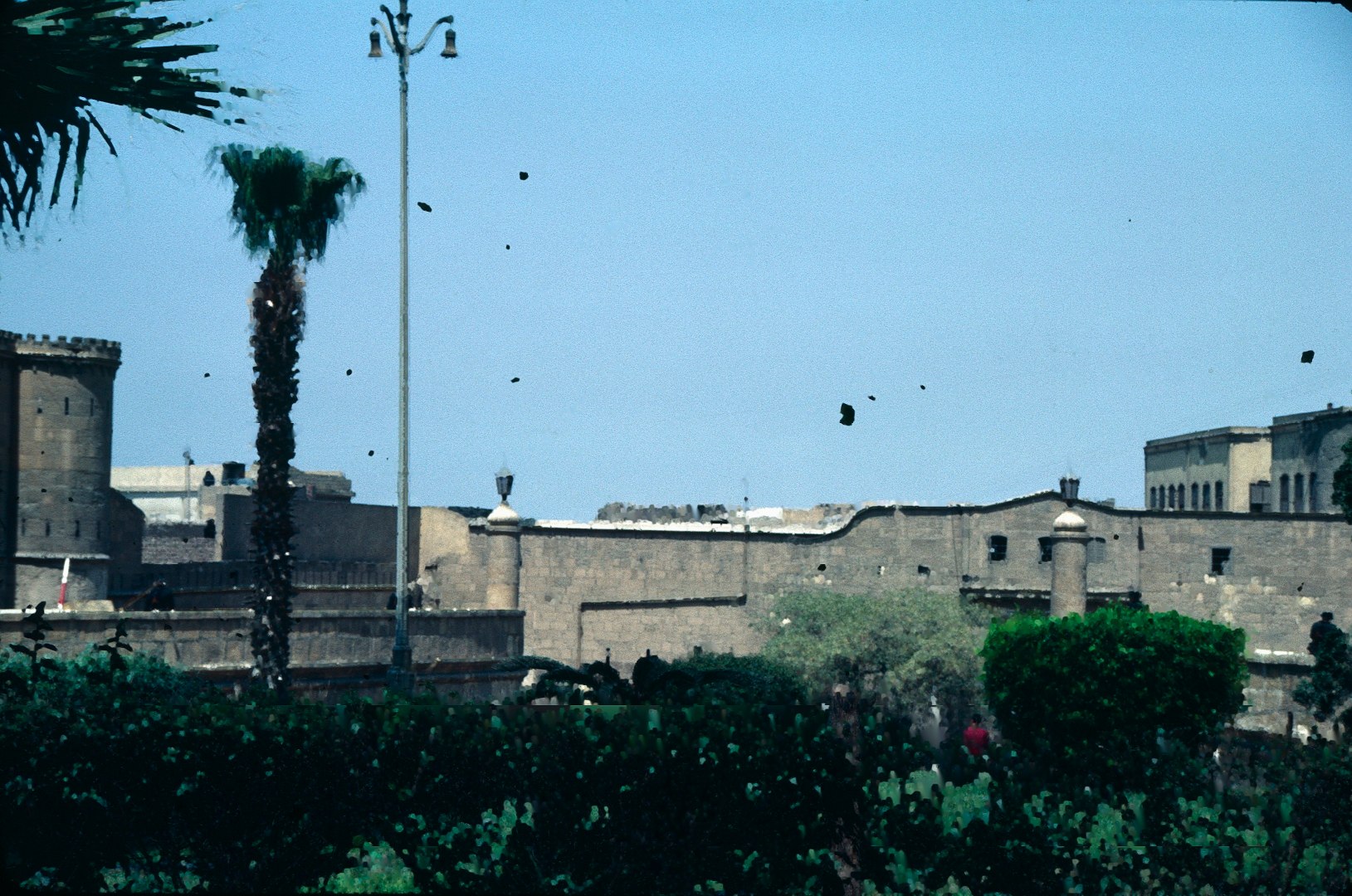 The prison that housed members of the Jama'a al-Islamiya after Sadat's assassination. Photo courtesy of Chuck Siefke.

In a country contending with what are becoming weekly bombings and an ever-growing presence of Ansar Bayt Al-Maqdis (which has recently pledged allegiance to the Islamic State), there is no doubt that Egypt has a duty to take measures to protect its borders and its people, albeit with steps that are proportional, constitutionally valid, and non-violative of citizen rights. Adding yet another element to the increasingly-broad scope of terrorism legislation in the country today, the Cabinet has recently approved the text of a Terrorist Entities Law and sent it to the Presidency for final approval and ratification.

The law grants the Public Prosecution the authority to issue both a Terrorist Entities list and a Terrorist list, which designate organizations and individuals, respectively, as per previous criminal verdicts or as determined by the court system.[1] As per the law, a terrorist is anyone “who led, managed, established, was a member of, or provided information or support” to a “terrorist entity”. Article 1 of the law lays out an expansive definition of a “terrorist entity” to include “every association, organization, group, or gang” that uses violence; incites fear; puts the lives or rights of individuals at threat; violates the national unity; harms the environment or the country’s natural resources; seizes or occupies public or private property; impedes the work of public officials, government bodies, homes of worship, hospitals, institutions, scientific entities, or diplomatic missions; blocks public or private transportation; endangers social peace; or impedes the application of the country’s Constitution and laws.

Once a “terrorist” or “terrorist entity” has been designated, the law grants “competent state bodies”[2] the authority to dissolve the entity, freeze its activities, close all affiliate buildings, ban meetings and all membership, stop its financial activities, freeze its property and assets, ban all related slogans, and temporarily deprive the individual or organization of his/her or its political rights.

The new Terrorist Entities law comes into the country’s legal scheme to affirm and slightly expand the existing Penal Code’s definition of “terrorism,” as well as to empower the state’s institutions with the authority to take immediate administrative steps against designated terrorists. Prior to this law, Egypt’s terrorism legislation only set forth punitive measures for specific acts committed by terrorist entities; the Terrorist Entities Law, on the other hand, focuses on the everyday activities of “terrorist entities” and deals with the ability of these organizations to function and be present on a day-to-day basis, rather than the terrorism they commit, per se.

Much like most of the country’s legislation, however, the definition of “terrorism” is worryingly broad and is described by terms that lack any legal definition, like “national unity” and “social peace.” The law also expands the definition of a “terrorist” to those who “provide information or support,” thus covering a significantly larger scope of individuals than the Penal Code and potentially implicating journalists and social media users as well. While the law consolidates the logistical authority of the state to crack down against groups that conduct weekly bombings and legitimately threaten the safety of Egyptian citizens, this same legislation will allow the state to shut down nongovernmental entities that peacefully protest and conduct awareness campaigns with opinions at odds with the government and thus, “violate the national unity.” The broad manner with which other pieces of legislation like the Protest Law have been applied confirms that this will indeed be the case.

Furthermore, the expansive grant of administrative power that the law brings to state institutions means that bodies like the police force, the Ministry of Social Solidarity, and the army will all enjoy immediate authority to raid offices, conduct arbitrary arrests, and freeze bank accounts; the law does not place limitations on these actions and the unchecked authority of these institutions suggest that any human rights violations committed while such actions are being pursued are likely to go unchallenged. While the targets of this legislation are technically violent entities like ABM, the law allows for non-governmental organizations at odds with the government to get caught in the administrative cross-fire as well. Finally, while the law does allow appeals to the terrorist designations through the court system, the increasingly politicized nature of the judiciary and the Public Prosecution suggests that designations are likely to be made without much challenge or protest.

The international community has recognized that all states have not only a right, but also a duty to take effective counterterrorism measures. While certain rights like freedom of expression, association and assembly, and privacy, may be limited in furtherance of counterterrorism measures under international law, these limitations must be prescribed by law, in pursuance of one or more specific legitimate purposes and “necessary in a democratic society.” Especially important to note is that any counterterrorism “law must be formulated with sufficient precision so that individuals can regulate their conduct.” Additionally, even in states of emergency, there are a number of non-derogable rights which may not be impacted under any circumstance and they include but are not limited to the right to life; freedom from torture or cruel, inhumane, or degrading treatment or punishment; the right to be recognized as a person before the law; and freedom of thought, conscience, and religion. With a definition for terrorism that is objectively more expansive than the standard definitions put forth by the international community[3] and legislation that continues to be non-specific and lacking in precision, there is serious concern that Egypt will fail to meet its duties under the International Covenant for Civil and Political Rights and as a member of the international community, both in ratifying this new Terrorist Entities law and in implementing it.

Together, the new Terrorist Entities law, the relevant penal code legislation, and the laws which implicate freedom of expression and assembly[4] all come together to further the consolidation of the state and the privileging of its security institutions, many times at the direct expense of human and civil rights. As Egypt continues to fight the known terrorist entities that target the nation, it should do so in a controlled and legally consistent manner; broad grants of power are unlikely to ensure the safety and stability of the country, but rather, fuel underground and unchecked sources of dissent.

[1] A branch of the Cairo Appeals Court will have the authority to determine whether an organization meets the definition of a “terrorist entity” after an investigation conducted by the Prosecutor General. If an entity has been on the list for three years and a final verdict on the group’s status has not been issued, the Prosecutor General must re-submit a plea to keep the organization on the list. Challenges to “terrorist” or “terrorist entities” designations must be brought within 60 days of the designation and are to be reviewed by one of the criminal divisions of the Court of Cassation with a decision made within 7 days thereafter. Designations must be made public and published in the Gazette, as well as shared with regional and international partners.

[2] The law does not specify the “competent state bodies,” adding yet another layer of uncertainty and potentially over-broad implementation.

[4] In addition to legislation which explicitly reference terrorism, Egypt also boasts a legal scheme which provides the state with tools to target freedom of expression, assembly, and the establishment of non-governmental organizations; most recently, such legislation has included the country’s one-year old Protest Law which allows the state to selectively issue permits for demonstrations and use violence against protesters in an exponentially quick manner, recent amendments to Article 78 of the Penal Code which sets forth life imprisonment or a death sentence for those who receive foreign funding or items “to commit acts against the state’s interest,” the re-activation of the state of emergency in Sinai, and a new Police Authority Law which allows the army to protect public institutions and criminalizes all actions committed against such institutions via the military judiciary system.