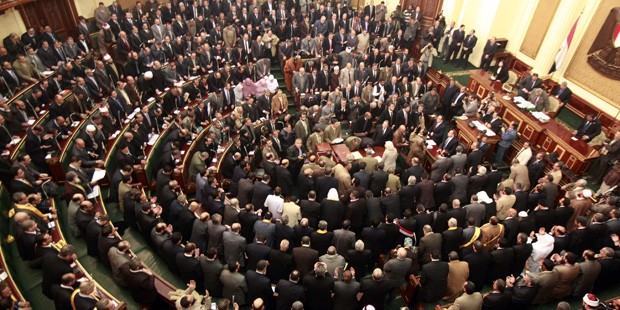 As Egypt’s House of Representatives prepares to sit for its first session, among the first tasks it will face is the review of the decrees and laws issued by Presidents Adly Mansour and Abdel-Fattah El Sisi since the approval of the Constitution in January 2014 and in the absence of a parliament.  Since his inauguration on June 8, 2014, Sisi has approved at least 263 laws and decrees, as tracked by TIMEP’s Legislation Tracker project and summarized in a new report.

Under Article 156 of the Constitution, the House of Representatives will have 15 days to discuss and approve all presidential decrees having the force of law passed in its absence. If the decrees are neither presented nor discussed, their force of law is to be retroactively revoked. Most analysts predict that the parliament will approve the laws in one sweeping motion, thus raising serious questions about the balance of powers and potential constitutional violations. It is unclear how many of the laws are actually up for review, given disagreements about what constitutes a law (rather than an administrative decision) and which of Mansour’s decrees are subject to the Constitution.

While there is no doubt that the Constitution authorizes the president to exercise his temporary legislative authority in the absence of an elected parliament, he is to invoke his legislative authority via limited means, and such legislation must be of an exceptional nature to accomplish what is absolutely necessary for the nation’s well-being. This is especially true in light of the extensive legislative process that would normally take place at the House of Representatives under Articles 121-122 of the Constitution. While the sheer number of laws issued by Sisi (and Mansour) without a parliament presents an issue for the incoming parliament, the quantity of laws is ultimately less important than their constitutionality.  Many of the decrees are routine and administrative, but others place controversial restrictions on rights, freedoms, and legal processes.

In exercising his temporary legislative authority, at least 116 of Sisi’s decrees have been administrative decrees, including but not limited to land allocations; the appointment of ambassadors, assistant prosecutors, and university deans; the cancellation of daylight savings time; and the establishment of presidential advisory boards. Over 32 decrees involved the ratification of treaties and executive agreements with foreign nations and international entities like the World Bank, almost solely on matters of economic cooperation.

To address economic stagnation and a stifled work force, well over 49 laws related to the economy and natural resources have come to pass under Sisi’s watch. A microfinance law and amendments to the Investment Law have promised to facilitate investment procedures, while a Specialized Council for Economic Development has been founded to explore creative remedies. Taxes on items like cigarettes and alcohol and streamlined processes for income tax collection may provide a potentially expanded source of revenue. A renewable energy law may capitalize on the country’s natural resources to bring energy to more homes. Various insurance schemes for farmers, workers, and social funds have also been set forth. To address the previous regime’s financial corruption and nepotism, one decree has established a committee to recover assets abroad and another has appointed a Presidential Adviser to Combat Corruption.

The most interesting and significant of Sisi’s extra-parliamentary decrees may not be many in number, but they certainly have significant implications: about 66 laws relate to military affairs or interpret civilian social and political rights.

Just weeks into his presidency, Sisi amended the University Law to mandate that university and department heads be appointed by the president of the republic. Just months thereafter, amendments set forth punishments including suspension and expulsion of students and teachers at al-Azhar University if they were found to impede in the educational process or detract from the institution’s prestige. University heads at all universities were further empowered to refer professors to disciplinary committees for participation in violence or political activities. But higher education has not been the only arena in which freedom of expression has taken a blow as a result of the president’s decrees: the famed Penal Code amendments enshrined life imprisonment penalties for the receipt of foreign funding, arms, or equipment; the Arab Convention on Information Technology Crimes, a broad document that enables a crackdown on social media forums and websites, was ratified; a military judiciary decree mandated that attacks on public institutions be considered attacks on military institutions and tried before a military court; the Terrorist Entities Law awarded “competent bodies” vast discretion to take measures against those labeled as “terrorists” under a vague definition.

Sisi also issued decrees significantly impacting the judiciary. A criminal procedure code amendment changed the process utilized by an investigative judge; the statute of limitations for bribery and embezzlement have been changed; a new extradition law enables the transfer of non-Egyptian defendants on trial or post-conviction to their countries in order to be tried or in order to serve their sentences. Other laws on subjects ranging from traffic to the protection of manuscripts, papal elections, and intellectual property rights have also been signed into law.

On the security front, the country’s military and policing institutions have enjoyed greater institutional power as a result of Sisi’s legislative decrees. Military pensions have been increased, the digging of border tunnels has been criminalized, the Ministry of Defense’s approval is now required for the approval of all weapons deals, certain border regions have been designated as “prohibited” or “restricted,” a new rank of junior police officer has been granted arrest powers, representatives of the Ministries of Interior and Defense have been appointed to the Legislative Reform Committee, and the Ministries of Interior and Defense enjoy the power to create security companies to protect public facilities and funds.

While it can be argued that many of the administrative, economic, and foreign affairs decrees issued by Sisi have been of an exceptional nature to accomplish what is absolutely necessary for the nation’s wellbeing and are expected of an executive exercising temporary legislative authority, the same cannot be said for the set of laws interpreting the political and social rights enshrined in the Constitution. These rights, the interpretation of which would normally be the product of months of parliamentary debate and deliberation among hundreds of elected representatives who represent a diversity of interests and backgrounds, are instead now enshrined in the law as a result of largely closed-door meetings between Sisi and a set of actors, none of whom are elected: the Legislative Reform Committee, the president’s various advisory committees, the cabinet, and the State Council. With the parliament likely to rubber-stamp presidential decrees without review, Egypt will inherit hundreds of laws that are not the product of democratic debate and arguably not what the country needs during its political transition.