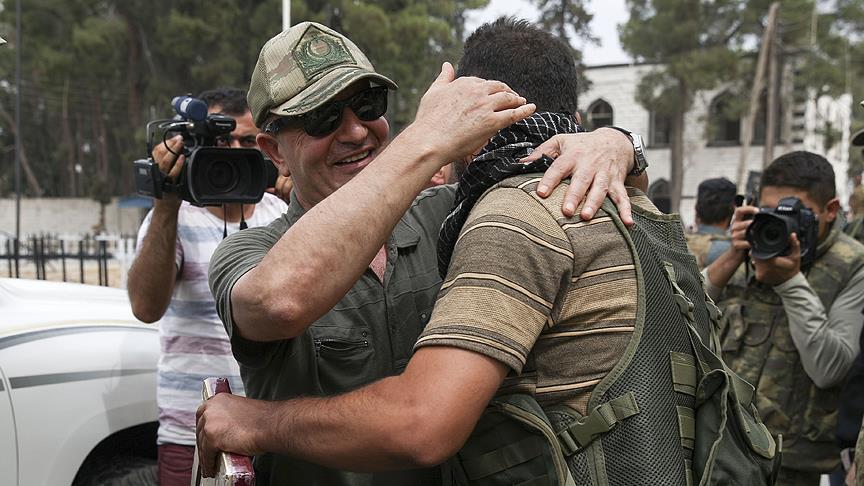 Almost exactly a year after Russia intervened militarily to prop up the regime of Bashar al-Assad, Turkish tanks rolled into the Syrian border city of Jarablus on Tuesday to help anti-government rebels expel the Islamic State from one of its most strategic strongholds. The operation, which drove out the militants eight hours after the battle began, is part of a new Turkish policy in northern Syria, the most complex military and political terrain in the country.

The scale and nature of the Turkish intervention remain unclear. Top Turkish officials, including President Recept Tayyip Erdogan, say the purpose of the intervention is to clear the region surrounding Jarablus from both the Islamic State and the Kurdish forces who are also fighting the terrorist group. Indeed, two days after the liberation of Jarablus, the People’s Protection Units (YPG) announced their withdrawal from Manbij, another Islamic State stronghold that was liberated two weeks ago.

Notwithstanding the immediate objectives of the Turkish campaign, the development demonstrates a new state of play in the northern parts of the country. The YPG’s withdrawal from Manbij two days after the Turkish entry into Syria has bitter symbolism for the Kurdish group, since the battle in Manbij was the second-deadliest battle for Kurdish forces since Kobane. That iconic battle in 2014 consummated Washington’s relationship with the YPG in the global war against IS in Syria, to the dismay of Turkey, long an American NATO ally.

The idea of Turkish intervention inside Syria was floated in July 2015, when Ankara offered to create an Islamic State-free zone in northern Syria, stretching from west of Kobane to Azaz on the outskirts of Aleppo. The zone, viewed by Kurds as part of their historical homeland, was deliberately designed to prevent the creation of a viable autonomous Kurdish region in northern Syria. Tensions between Washington and Ankara had reached a high point and marked serious divergence between the two allies over the fight against the Islamic State in Syria. For Turkey, reliance on the YPG—a Kurdish militia founded by the Kurdistan Workers’ Party (PKK) in Turkey, which is designated as a terrorist organization by both Turkey and the United States—enabled what Ankara considers a terrorist organization in the fight against another terrorist organization.

The two allies reached a compromise in July 2015 in which U.S. would not support the YPG west of the Euphrates River, effectively ceasing the Kurdish group’s operations in that area. As a result, Turkey shelved the idea of intervention even after it had mobilized rebel forces to fight the Islamic State. As part of preparations for the planned zone, Al Qaeda’s former affiliate, Jabhat al-Nusra, which was rebranded last month as Jabhat Fatah al-Sham, withdrew from that region to clear the way for rebel-Turkish collaboration it rejected on ideological grounds.

In October, the U.S. helped to create an Arab-Kurdish alliance to serve under the Syrian Democratic Forces (SDF) to appease Ankara and project an image of inclusiveness as the fight against the Islamic State began to extend into predominantly Arab towns in eastern and northeastern Syria. But after the Russian intervention in Syria, the YPG snubbed the Turkish-American deal, began engaging west of the Euphrates, and cooperated with Russia and the Syrian regime against the Syrian rebels, including factions trained and bankrolled by the United States. The episode demonstrated the bankruptcy of the U.S. strategy in Syria: A U.S. ally, regarded as a terrorist by a NATO ally, was fighting other U.S. allies also backed by that NATO ally.

Last week, the YPG and the Syrian regime had their most violent and significant confrontation yet in Hasakah, with U.S. fighter jets scrambling to ward off regime planes that attacked YPG areas. In the context of these clashes, it was also intriguing that both Russia and Iran issued uncharacteristically soft and generic statements on the Turkish intervention inside Syria. Both countries seem to support the Turkish effort to reverse the dominance of Islamic State and Kurdish forces in the areas near Jarablus. Even though an alliance with the YPG could serve tactical purposes for Tehran’s ally in Damascus, the group’s expansionist agenda in Syria is a potential threat to Iran, which has its own Kurdish problem. Also, a Russian proposal to the YPG to shift loyalty to Moscow around two months ago was declined by the group in favor of a more lucrative alliance with the U.S.

More importantly, however, the apparent support was a result of Turkey’s diplomatic overtures, which makes the intervention ever more relevant to the overall conflict in Syria. Even if Tehran and Moscow still view the YPG as a potential ally, the group suddenly appears less relevant if the outcome is closer cooperation among Iran, Russia, and Turkey, with the exclusion of the United States. Still, the episode by no means reduces the YPG to a sideshow: It will continue to be a significant player, but with less dominance in northern Syria.

Washington’s approval of Turkish intervention should not be taken lightly. The U.S. rejected the idea last year even though it looked more needed than now in the fight against the Islamic State and despite the growing tension with Turkey at the time. The U.S. was adamant that the Syrian rebels must work with the YPG against the Islamic State and that Washington would not support any other effort if the opposition continued to view the YPG as an enemy due to the YPG’s perceived collaboration with the regime. As recently as two weeks ago, for example, the U.S. special envoy for Syria, Michael Ratney, reiterated a similar message in a meeting with the opposition. The opposition refused to align with the YPG.

It is safe to say that Washington’s hands were slightly forced this time. In addition to the tension between the United States and Turkey over Fethullah Gulen, the cleric accused by Erdogan of staging the coup last month, Ankara’s talks with Moscow and Tehran strengthened Turkey’s standing. During Vice-President Joe Biden’s visit to Ankara on the day of Turkey’s intervention, the U.S. not only approved of the military campaign inside Syria, but it also finally acted on its promise to ask the YPG to leave the areas west of the Euphrates River, a move that would have prevented much tension between the two countries and possibly even the need to intervene militarily.

This concession contrasts sharply with what the Turks viewed as a provocative visit by Brett McGurk, the U.S. envoy to the anti-Islamic State coalition, to the YPG in northern Syria in January and the release of pictures showing the envoy receiving a shield of honor from Polat Can, a PKK leader. The photo-op slighted the Turks, as the YPG had clearly violated the Turkish-US understanding over operations west of the river.

The development could reduce tensions and help bring the US and Turkey closer in the fight against the Islamic State. If Turkey is to establish a long-term strategy in the north based on rolling back the influence of both the Islamic State and YPG, this might propel Ankara to seek a less lawless north. Given Russia’s increasingly assertive role in Aleppo since its intervention in Syria, the Turkish intervention in the same area could push the two countries to seek a workable formula in the north, as the U.S. has shown little appetite to act more actively to resolve the conflict in that region. But it can equally further complicate the situation for the Americans, especially that Turkey will oppose plans to act against Jabhat Fatah al-Sham before a final outcome for Syria is clear.

Turkey has demonstrated that it can quickly mobilize rebel forces to fight against the Islamic State, something the U.S. failed to do for two years. The rebels’ involvement will position them to have a greater role in the battle to clear the Aleppo countryside from Islamic State forces and even retake Raqqa, the terror group’s capital.

Turkey’s intervention also demonstrates that the insurgency in Syria can still be steered by its backers toward a constructive outcome, despite attempts by jihadists to co-opt it. For example, the development has delayed – if not disrupted – talks by different rebel factions to merge with the recently rebranded Jabhat Fatah al-Sham. The talks followed weeks of a public relations offensive to rally forces behind the front and an aggressive campaign of recruitment in the north. Some of the groups that were supposedly involved in the talks have suddenly shifted to work with Turkey, under U.S. air cover, in the fight against the Islamic State.

Equally important, the rebel involvement in the Turkish-led campaign undermined the YPG as the only formidable force against the Islamic State. Reliance on the YPG, even as the Kurds used the US support to establish a “federal system” in northern Syria, was not a sustainable policy. The group is perceived as an ally with the regime by locals living under the Islamic State and by the rebels, especially after the group fought the rebels as they attempted to seize regime bases in 2012. Regardless of what happens next, the damage has already been done for the YPG. It is no longer the only group capable of fighting the Islamic State, and is now less likely to have a lead role in the battle to retake Raqqa.

Overall, the Turkish intervention is an opportunity. It can help to channel the rebels’ energy to fight the Islamic State in Aleppo and eastern Syria. It can also be the start of a different chapter in that region, as both Turkey and Russia become directly involved on the ground.