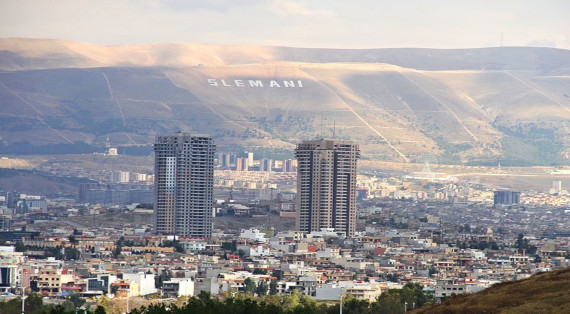 The city of Sulaimani in the Kurdistan region of Iraq (photo via Wikimedia Commons).

Although the Kurdistan region has been ruled by the two ruling parties—the Kurdistan Democratic Party (KDP) and the Patriotic Union of Kurdistan (PUK)—over the past 26 years, the two parties have never been able to crack down on political dissent and opposition parties completely. Their dream of complete consolidation of power has remained just a dream. However, it is not the iron fist of the KDP and PUK that is leading the opposition parties to fall apart; it is their own failures. Influential and activist members of several opposition parties have sought to introduce reforms, but these have largely been rejected by the political elite in their parties, who control their media, financing, organizational bases, and operations. This reflects the lack of vision and strong leadership, internal infighting, and refusal to reform that are hampering the Kurdish opposition.

When Nawshirwan Mustafa founded the Change Movement (Gorran) in 2009, hope for radical change was at its peak. Mustafa was an influential figure among all the opposition parties, as he was one of the founders of the Kurdistan Regional Government and had strong support within the peshmerga and security forces, and after Mustafa’s death last year, Gorran and other opposition parties have grown weaker. The internal crisis within Gorran following Mustafa’s death led a group of influential party officials and political activists to initiate the Revival Project, a reform package. Gorran officials are also concerned to an extent about the future of the party, saying it “faces a deadly failure” if it fails to reform and address the internal issues. Likewise, calls for change within the Kurdistan Islamic Group (KIG) brought some influential members and political activists together to push the party leadership to implement reforms. Similarly, but more strongly, the Kurdistan Islamic Union (KIU), has also initiated a reform campaign that is also endorsed by the secretary-general of the party. Many fear that without reforms, opposition parties will becoming increasingly centered on controlling families, like the KDP and PUK, rather than representative of party members.

Yet these opposition groups, as well as the recently founded Coalition for Democracy and Justice (CDJ),[1] not only lack a clear political vision for their parties, but for politics in the Kurdistan region and Iraq as a whole. They are stuck between deciding whether to function as opposition parties or governing parties, and therefore call themselves “protesting parties,” a new concept further manifested when they denounced the Iraqi parliamentary election results. Because their leaders’ approach to politics is still based on Kurdish nationalism, the parties failed to approach an Iraqi coalition to run in the elections, resulting in their loss of seats in parliament. This identity politics approach by most of the opposition parties[2] has failed them terribly in establishing good relations with other Iraqi parties.

Moreover, the two Islamic parties—the KIG and KIU—have failed to renew their political ideologies. Although Islamic ideological parties across the region are facing difficult times, in the Kurdistan region, Islamic parties have failed to grow and gain influence, even though most people in the region are Muslims. This is because the parties have failed to separate their Islamic da’wa (proselytizing and religious work) from political organizing. Interestingly, there have been calls within the parties to remove the “Islamic” label from their parties; however, the conservative hardliners remain powerful enough to stop such moves. The Islamism label of the parties has often been used by the ruling parties to demonize them, especially during times of political conflicts and tensions with the ruling parties. This is a reason why the European countries and the United States have not approached them well. The Islamic parties cannot grow their audience if they do not overcome their Salafi mentality, which has paralyzed the parties and resulted in their failure to expand.

Another major problem with the opposition parties is that they largely remain based in Sulaimani and none of them have been able to reach all areas of the Kurdistan region. Whereas Sulaimani has historically been active culturally and politically, the PUK is also more open toward the political dissent that has prevailed in Sulaimani over the past 26 years, and free Kurdish media have been based there ever since. Therefore, opposition parties should have focused more on Erbil and Duhok. Although the CDJ tried a bit, it too failed. The opposition parties must review their policies so as to become nationwide parties.

Finally, traditional party hierarchy in Kurdish party has been centralized to the extent that the leaders control and monopolize every facet of the organization. This has left the parties undemocratic and relying on charismatic leaders rather than creating institutions. With the death of a charismatic leader, the whole party can fall apart—such as in the case with Gorran after Mustafa’s death. The parties that placed their strength on their charismatic leaders failed to create new ones, and the power struggle of immature leaders will always lead the parties to uncertainty, as Gorran is experiencing now.

As the Kurdistan region heads to its parliamentary election, the opposition parties (excluding the New Generation) were, surprisingly, calling for its postponement, as they were not prepared. Postponing the election would have been resulted in extending the mandate of the same government they called for dissolving a year ago. The opposition parties fear they will face another failure in the coming election, which could further weaken the opposition and allow the ruling parties to become more autocratic. Disenchantment in elections is increasingly pervasive, as they have not brought any real change in recent years. As a result, the turnout for the upcoming election may be even lower than that of the Iraqi parliamentary election, which was under 50 percent. The KDP and the PUK have a large number of members, militia forces, security forces members, and people on their payrolls, all of whom will be forced to vote these parties. Moreover, the KDP and the PUK have a stronger media presence that can mobilize voters. Additionally, as in all other elections, the ruling parties can distribute cash to buy votes and use the government and military institutions to push people to vote for them.

If the opposition parties fail yet again in these elections, there will likely be serious consequences. Aims for democratization and social transformation would be delayed, the corrupt and kleptocratic rentier system of governance would remain in place, the KDP and the PUK would further consolidate power and strengthen their economic empires and militia forces, and the dream of democratic change would yet again be deferred. On the other hand, there are calls within some groups in opposition parties subtly claiming that change will not happen if the change seekers do not resort to armed struggle. Although it is very unlikely for groups to organize themselves in armed factions now, maintenance of the status quo may make it a reality.

The next Kurdistan Parliament will be tasked with drafting a constitution and amending the presidential law—two decisive elements of Kurdish democracy. A decline in the number of seats held by opposition parties could invigorate the KDP and in turn result in greater support for the maintenance of the presidential system, rather than creation of a parliamentary system, which is backed by Gorran and all other parties, including the PUK, and which has been the core issue between the KDP and Gorran over the past four years. The opposition parties support decentralization of power and empowering local governorate administrations and mayorships, mechanisms that could expand local democracy. However, the KDP has supported further centralization. A weak opposition in parliament, therefore, could result in the formulation of a constitution that may not reflect principles that pro-democracy Kurds have wished for.

[1] The party was founded in January after a split in the PUK, but this move was reactionary rather than a serious party formation, and its leader, Barham Salih, has rejoined the PUK and is that party’s candidate for the Iraqi presidency.

[2] The newly established New Generation Movement, claiming a new political agenda and vision, was brave enough to go beyond ethno-nationalism lines when it joined the al-Nasr and al-Sairoon coalition to form the biggest bloc in the Iraqi government, but its populist approach may ultimately leave these efforts in vain.