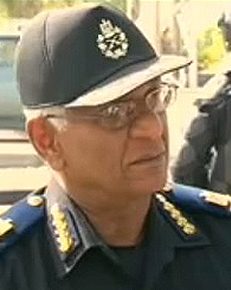 Major General Shoaib Abdo Siaam is a graduate of the Police Academy who served as a senior figure in the paramilitary Central Security Forces (CSF) for several years. In 2010, Siaam was wounded during clashes in Giza, in which Christians were protesting legal and extralegal attempts to halt construction a partially completed church. On January 28, 2011—one of the biggest days of protests and clashes during the revolution—Siaam was the leader of a unit that was deployed to control bridges leading from Giza to Cairo. In July 2011, Siaam was assigned to an administrative position, Director of the General Directorate of Central Security. Despite the administrative nature of his new job, Siaam was involved in several incidents where police and protesters clashed violently. In November 2012, Siaam was injured during major demonstrations on Mohammed Mahmoud Street in downtown Cairo and then-Interior Minister Ahmed Gamal al-Din visited him in the hospital.

Siaam has been described in news reports as the commander of security forces around the Ittihadiya Palace during protests in February 2013. It was during these protests that one particularly savage and bizarre beating took place, that of Hamada Saber. Saber was stripped nearly naked and beaten by police, an incident that was captured on video and widely shared. Saber initially accused the police, but was apparently then coerced into recanting his statements, even while his family maintained that the police were culpable. When Saber went back to his original story, blaming the police for what happened, Siaam accused Saber of having exposed himself to police officers and attempting to urinate on them prior to being beaten.

Despite the immense security challenges facing the country in 2013 and 2014, Siaam largely remained out of the public eye. He was involved in securing campuses during the university protests in the spring 2014 term, but does not appear to have been responsible for counterterror operations. In the massive reshuffling of the Interior Ministry in July 2014, Siaam was promoted to Assistant Minister of Interior for Central Security.

Siaam continued to keep a low profile as head of CSF. He was mentioned in glowing news stories about ministerial tours of CSF bases, anti-narcotics strategy meetings, and blood drives, but has rarely been interviewed or otherwise reported on. Siaam was involved in developing and carrying out security procedures for the verdict of former President Hosni Mubarak’s retrial, but his role in other events is unclear. In late December 2014, Siaam was assigned to lead the Security and Protection Sector, which oversees the Presidency Police, parliamentary police, VIP Protection, and Tourism and Antiquities Police Directorates.