is pleased to host

the premiere DC and NYC screenings of EXT. Night (Leil Khargi) followed by a discussion with director Ahmad Abdalla, and actors Ahmed Malek and Karim Kassem

In this film, over one extraordinary night, the film’s characters struggle with various challenges reflecting the daily struggle to break away from the social norm: patriarchy, societal hypocrisy, and economic and political power. Each is fighting his or her own battle, leading to a journey they did not expect inside their city, allowing them to see a side of it they never witnessed before. 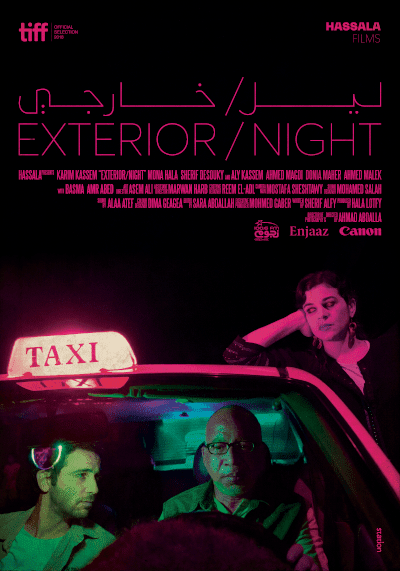 Tickets are required and available for purchase at the following:

Tickets are required and available for purchase at the following:

The film will be in Arabic with English subtitles. The post-film discussion will be in English.

Ahmad Abdalla is an Egyptian filmmaker. He studied music in Cairo until he shifted his career to film editing in 2003. Ahmad directed his first feature film “Heliopolis” in 2009 which was one of the first independent Egyptian films to be released theatrically in Egypt, followed by “Microphone,” which was selected among the best 100 Arabic films in history by Dubai Film Festival. In 2013 he wrote and directed “Rags & Tatters” and then “Decor” in 2014.

Ahmed Malek Mostafa is an Egyptian actor. His first audition came at the age of eight when his uncle took him to perform in a commercial. In 2005, Malek had his first role in the television series Ayamna el helwa (Our Good Days). In 2010, executive director Osama Farid asked Malek to perform the role of young Hassan al-Banna, founder of the Muslim Brotherhood, in the television series El-Gamaah (The Brotherhood), which is considered the then-15-year-old’s first breakthrough role. Malek played remarkable roles in internationally recognized films such as Clash (2016) by Mohamed Diab, which opened the Un Certain Regard section at the Cannes Film Festival, and Sheikh Jackson (2017) premiered at Toronto International Film Festival (TIFF) by Amr Salama. Malek is now taking part in his first international film, Montreal Girls by Canadian director Patricia Chica. His latest acting credits include the films Ext. Night by Ahmed Abdallah, premiered at the TIFF 2018, Gunshot by Karim El Shenawy in his feature directorial debut, and The Guest by Hadi El Bagoury. Malek was announced among TIFF ’18 Rising Stars as an international talent.

Karim Kassem is a professional Egyptian actor. Discovered in 2006, he had his cinematic breakthrough in the teen film “Awqat Faragh.” Karim Kassem graduated from the The American University in Cairo, where he majored in theater and acted in many of the university’s plays. He is trilingual in Arabic, French and English. He also trained in Paris (Cours Florent), New York City (Susan Batson), Los Angeles (USC Film School) and London.

Nancy Okail is the Executive Director of TIMEP, and has more than 15 years of experience working on issues of democracy, rule of law, human rights, and security in the Middle East and North Africa region. She analyzes these issues and advocates in favor of human rights through testimony to legislative bodies, providing policy recommendations to senior government officials in the U.S. and Europe. Prior to joining TIMEP, Dr. Okail was the director of Freedom House’s Egypt program. She has also worked with the Egyptian government as a senior evaluation officer of foreign aid and managed programs for several international organizations. Dr. Okail was one of the 43 nongovernmental organization workers convicted and sentenced to prison in a widely publicized 2012 case for allegedly using foreign funds to foment unrest in Egypt. She holds a Ph.D. from the University of Sussex in the UK; her doctoral research focused on the power relations of foreign aid.

Related Content
MEI-TIMEP: Assessing MENA’s 2022 Climate Implications and Exploring Policy Opportunities for 2023 COP Comes to MENA 01/24/2023
Tahrir’s Youth: A Book Talk and Discussion on the Anniversary of Egypt’s #Jan25 Events 01/19/2023
The IMF and Social Welfare in MENA: Prospects for Alleviating Crises in Egypt, Tunisia, and Lebanon Events 12/08/2022
Ahead of the U.S.-Africa Leaders Summit: Examining Egypt’s Record on Anti-Corruption and Women’s Rights Events 12/06/2022
Youth Climate Advocacy in MENA: Organizing and Demands Ahead of COP 27 COP Comes to MENA 10/24/2022