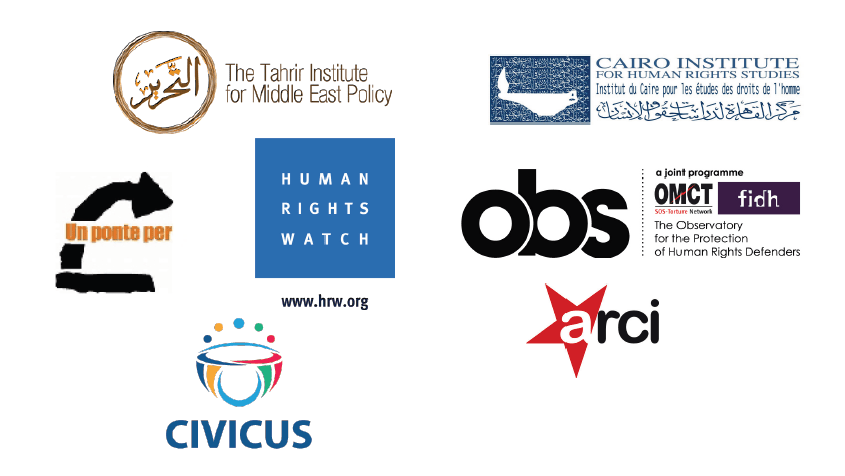 We the undersigned civil society organizations strongly condemn the ratification of a new law regulating non-governmental organizations (NGOs) in Egypt, issued by President Abdel-Fattah El Sisi on Wednesday, May 24. The law ushers in unprecedented levels of repression and will criminalize the work of many NGOs, making it impossible for them to function independently.

Implications of the law include the absence of valuable human development and charity initiatives, and a media opacity and lack of accountability around government abuses. These functions of Egyptian NGOs are particularly essential amid the current security and socioeconomic crises. Vulnerable Egyptians and refugees on Egyptian territory are in ever-growing need of the support and essential services provided by the NGOs targeted by this law—such as social services, education and poverty alleviation, as well as legal, medical or psychological support to survivors of torture, abuse and gender-based violence.

The law is virtually the same as earlier legislation approved by the Egyptian parliament on November 29, 2016, but shelved after widespread international criticism.

Under Law 70 of 2017 for Regulating the Work of Associations and Other Institutions Working in the Field of Civil Work, all NGOs are prohibited from conducting activities that “harm national security, public order, public morality, or public health,” vague terms that can be abused to constrain legitimate activity. The bill creates a “National Authority for the Regulation of Foreign Non-governmental Organizations” that includes representatives of Egypt’s top national security bodies—the General Intelligence Directorate and the Defense and Interior Ministries—as well as representatives from the Foreign Affairs Ministry and the Central Bank of Egypt. The authority will oversee the work of NGOs, including any funding or cooperation between Egyptian associations and any foreign entity. The law prohibits any Egyptian government body from making agreements with NGOs without the authority’s approval.

The law strictly controls the funding of NGOs. It states that associations must obtain permission from the authority 30 days in advance to receive donations from Egyptian entities or individuals inside Egypt and must inform the Social Solidarity Ministry upon the receipt of such funds. The law further states that associations may receive funding or grants from foreign entities inside Egypt or Egyptian or foreign entities outside Egypt as long as the authority is notified within 30 days of receipt. The authority then has the right to reject the funding within a 60-day period following its notification. Associations may not use these funds within the 60-day review period.

Additionally, the law gives the government the authority to monitor and challenge NGOs’ day-to-day activities, from choices in leadership to the schedule of internal meetings. Even a move as administrative as relocating headquarters to another building without informing the authorities is punishable under the law. The law creates a blanket and ambiguous provision authorizing the Egyptian government to cancel a foreign NGO’s license at any time if the NGO’s work is deemed to be harming national security or public safety or disturbing public order, or per the principle of reciprocity.

Thus, state bodies assembled in this new authority—including security bodies—are given the power to interfere in every aspect of NGOs’ existence, administration and activities. Parliamentarians claimed the law will make this sector more “secure” by ensuring robust oversight, but it is doubtful that this authority will have the capacity to effectively oversee a thriving and active NGO sector. Rather, full implementation of the law will induce paralysis and eventual closure of much of the nonprofit sector, as many NGO requests for licensing or approval of funding will likely go unanswered and be considered denied by default. Yet Egyptians are in severe and growing need of the services and support NGOs provide. The country needs the non-profit sector to grow, not to wither away.

The law punishes a host of violations by one to five years in prison and a fine of 50,000 to 1,000,000 Egyptian pounds. Among the prohibited activities that could result in a prison sentence are:

Anyone who issues a license to an NGO whose work violates the law, obstructs the government from inspecting an NGO’s paperwork, or conducts public opinion surveys or fieldwork or moves an NGO office without approval faces a prison sentence of up to one year or a possible fine of 20,000 to 500,000 Egyptian pounds.

This law contravenes Egypt’s commitment to international human rights law, including the International Covenant on Civil and Political Rights, which states that no restrictions may be placed on the right to free association other than those “which are necessary in a democratic society in the interests of national security or public safety, public order, the protection of public health or morals or the protection of the rights and freedoms of others.” No restriction should undermine the essence of the right to freedom of association itself.

We call upon the Egyptian government to drop all existing criminal investigations into NGOs and to repeal this law in accordance with its domestic and international obligations to protect freedom of association.

Restricting civil society to this degree eliminates a path for Egyptian citizens to peacefully express dissent, hold the government accountable for human rights violations, and access human development initiatives at a time of economic hardship. By constraining civil society, the government has made it more difficult for NGOs to respond to social needs that at times can lead to unrest, such as recent increases in the price of bread. Increased state control of Egyptian NGOs results in opacity surrounding security threats and terror attacks and gives perpetrators the opportunity to shape the narrative of the struggle between the state and violent extremists.

Additionally, we call on Egypt’s international partners providing foreign assistance and economic aid such as the United States and the European Union to use their influence to urge the Egyptian government to allow NGOs to fulfill their function within civil society. Moreover, international bodies such as the United Nations and United Nations Human Rights Council, and their member states, must endeavor to use their positions as mediators within the international community to hold Egypt accountable for legislation that muzzles civil society to such a severe degree.

It should not be a crime to advocate for human rights and development in Egypt, but this law does just that, crippling civil society for years to come.