On October 9, 2011, thousands of peaceful protesters marched toward the Maspero building, the headquarters of the Egyptian Radio and Television Union, to demonstrate against the demolition of St. George Church in Edfu, Aswan. Eyewitnesses and video footage confirm that as the demonstrations proceeded, security forces fired tear gas and live ammunition, ultimately driving armored personnel carriers into the crowd. Official state media incited against the protesters, with at least one state television anchor calling on “all honorable citizens” to take to the streets to defend the military from “Coptic attackers.”

In the seven years since the Maspero massacre:

No high-ranking government, military, or police officials have been held accountable for the Maspero massacre.

Despite attempts by the families of the victims to submit complaints to the prosecutor-general requesting the referral of military officials in high-ranking positions at the time of the massacre—including Field Marshal Muhammad Hussein Tantawi, Lieutenant General Sami Anan, Major General Hamdy Badeen, and Major General Ibrahim Damati—to criminal prosecution, these complaints were left unaddressed. 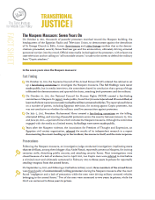