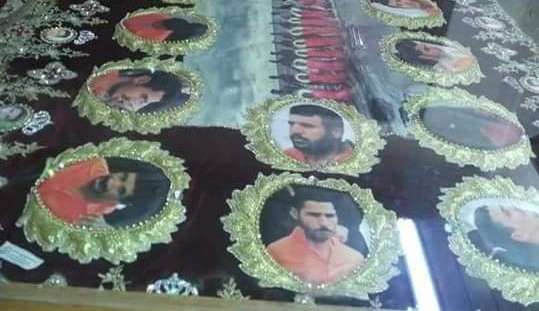 Shrine for the Coptic martyrs in the Church of the Martyrs of Faith and Homeland in Martyrs village (formerly al-Awar village), Minya governorate (photo via Wikimedia Commons).

This article was translated from Arabic to English. Read the original version here.

The Coptic Orthodox Church celebrated the Coptic New Year, also known as All Martyrs Day, on September 11. Earlier this year, Coptic Orthodox Pope Tawadros II of Alexandria, accompanied by a number of bishops in a mournful procession at Cairo airport, received the relics of the Coptic martyrs beheaded by the Islamic State three years ago in Libya. Similarly, the Coptic Orthodox Church also commemorated this year the first anniversary of the martyrdom of 28 Coptic citizens, who were killed on their way to visit the Monastery of St. Samuel in Minya, Upper Egypt. This horrendous act was perpetrated after they had been asked about their religious identity.

On both occasions, the church reiterated the discourse on the status of martyrs, transferred their relics to dedicated places in some churches, and kept churches open for religious visits. Referencing an essential part of its identity, the Coptic Orthodox Church recalled the image of early Christian martyrs to describe the victims of the recent terrorist attacks on churches. As a result, the Coptic Orthodox Holy Synod designated a day to commemorate these modern-day martyrs. In addition, a department at the Archdiocesan Social Services was created to take care of martyrs’ families and confessors under the supervision of the pope.

By the second century AD, the term “martyr” came to be used in the church to describe those who accepted death for the sake of their faith. The concept of martyrdom was rooted in the second century, when many Christians in the Roman Empire were victims of persecution, while others who confessed their faith publicly were killed for their beliefs. Since that time, Coptic martyrs have been venerated in the collective mind of Copts, with ongoing social and religious impacts amid sectarian tensions, violence, and discrimination.

Is the Veneration of Martyrs a Mistake?

With all due respect to the status of martyrs and their sacrifices, the exaggerated and inflated discourse on martyrdom, not to mention the consolidation of the spirit of submissiveness, has negative consequences for the church, Copts, and the families of the victims themselves. Such a discourse conveys a message that Christianity is a religion that teaches how to tolerate injustice, oppression, and discrimination. Moreover, when such practices are authorized religiously, this concept entrenches an idea that entering paradise is not achievable unless one suffers martyrdom, persecution, discrimination, or hardship. The persistent veneration of martyrs is usually accompanied by some kind of negativity attached to the idea of claiming one’s rights, positively encouraging oppressors to continue to commit their crimes as long as their victims are contented with the injustice afflicting them. Such an approach exonerates officials for their failure in carrying out their duties—one of their main duties being to provide protection and security to people. By trying to avoid responsibility, the state may leave the Copts vulnerable and promote a lack of accountability.

Moreover, it is not fair to see religious leaders warn against committing sins and even impose religious penalties to deter sinners while turning a blind eye to the attacks carried out based on religious affiliations.

Thus, this discourse of martyrdom sets up a barrier between the clergy and Coptic laymen who suffer and wish to put an end to their ordeal. They are suffering and seeking help to stop these attacks. However, at the same time, they reject any advice from those who encourage them to accept such misfortune and anguish for a better life after death. It is the responsibility of the church and the clergy to teach Copts the values ​​of participation, claiming their rights, and rejection of injustice. The church is also responsible for encouraging Coptic citizens to be positive and active and to have an understanding of the values ​​of citizenship, not to mention that they should be striving to achieve them.

This pattern places a social and moral burden on the families of the victims because it creates an aura around the martyrs by imposing a model of practice and behavior that restricts the freedom of the martyr’s family members. These restrictions include religious and moral obligations on the wives and children of martyrs, denying the right of these widows to remarry, expecting a specific code of dress and behavior, and other social practices that add further injustice and pressure on the martyrs’ families.

The Holy Synod, the highest church authority in the Coptic Orthodox Church, decided to commemorate February 15 of each year as an anniversary of the modern-day martyrs. This date coincided with the martyrdom of 20 Copts who were beheaded by the Islamic State in Libya. This decision was made for the first time in several centuries despite the occurrence of many massacres that claimed the lives of more Coptic victims than were martyred in Libya. In the 1980s and 1990s, Islamist groups targeted many Copts because of their religious identity. In addition, there were many recent bombings that took place against the Copts, such as those at Two Saints Church in Alexandria in 2011 and St. Peter and St. Paul Coptic Orthodox Church in the Cairo neighborhood of Abbasiya in 2016, as well as other violence such as the Maspero massacre in 2011.

The beheading of Copts in Libya has recalled many old memories for the church and for Copts because of the similarity of the event to the persecution they suffered at the hands of the pagan Roman state. The Islamic State, like the Romans, argued with the victims and killed those who refused to renounce their faith. The same basic steps took place in the early period of Christianity when the martyrs had to confront power and authority and remain steadfast in front of the threats. Moreover, videos and images of the recent incident depicted the torments inflicted on martyrs and described the martyr as a triumphant and true hero of the faith..

Marking a day to commemorate modern-day martyrs, however, cannot be analyzed in isolation from the fact that the Islamic State has become a symbol of evil in the world. The organization committed its massacre away from the borders of the state and away from the state and society which incubate terrorism in full view of official agencies. The church’s choice to focus on an event outside Egypt’s borders serves as a way to avoid criticizing the state and society for their failure to prevent the targeting of Christians based on their religious identity.

Why Are Martyrs Commemorated Now?

There are several reasons for the church and the Copts to venerate, celebrate, and honor the martyrs even more than living religious leaders. Martyrs have enjoyed high status in the Coptic Orthodox tradition. They are placed in a higher position than saints and are ranked a bit lower than the apostles. They intercede for Christians, especially in the places where these martyrs have lived. Throughout church history, the idea of ​​martyrdom has been established as a great work that ends the earthly life, which is full of hardship and pain. Martyrdom draws one closer to the other world, where there is happiness and eternal bliss.

These feelings cannot be separated from the nostalgia for the era when the Coptic church flourished in terms of teaching and preaching faith. It is martyrdom that brings the Copts closer to the martyrs and saints of the early church. The martyr, according to the collective subconscious of Egyptians in general and Copts in particular, is a symbol of heroism and sacrifice. Therefore, legends, such as those about the martyrs’ ability to heal diseases and their ever non-decaying bodies, are woven around them. Commemoration of martyrs is an opportunity for Christians to express themselves. They feel strong as they hold celebrations under the protection of those saints or martyrs, who give them a sense of security and true belonging.

There are also social reasons that correlate to the position of religion in Egypt. In fact, religious conversion for most Egyptians, whether Muslim or Christian, is seen as a kind of social shame, which extends not only to the convert, but to their surrounding circles, including family, local community, and religious institution. If a person renounces his or her faith for fear of persecution, they bring shame upon the group to which they belong. If they are killed, this persecution is turned into a kind of pride. This is based on a belief that martyrs are strong enough not to fear violence even if it ends with the loss of their life, but the oppressors are seen as unjust wrongdoers who force people to deny their faith.

In addition, there are economic activities associated with the celebration of martyrs, including small businesses such as printing, transport, and tourism as well as charitable activities. Thousands of people work in printing biographies and pictures of martyrs, organizing religious trips, and collecting donations and alms. This usually turns shrines into shopping centers.

The celebration of the martyrs is required and respected in terms of their sacrifice as they are forced to choose between renouncing their faith and losing their life. However, the exaggerated veneration of martyrs, apart from its historical context, is likely a deviation that may lead to a kind of negativity and consolidation of injustice. Life is a divine and fundamental right for every human being. This right is asserted in the preamble of many international conventions and is enshrined in the Egyptian Constitution. It is the duty of every human being to defend it. The church’s role as a religious institution, after all, is to encourage its members to love life. The splendor of eternal life should not take away from the beauty of life on earth.