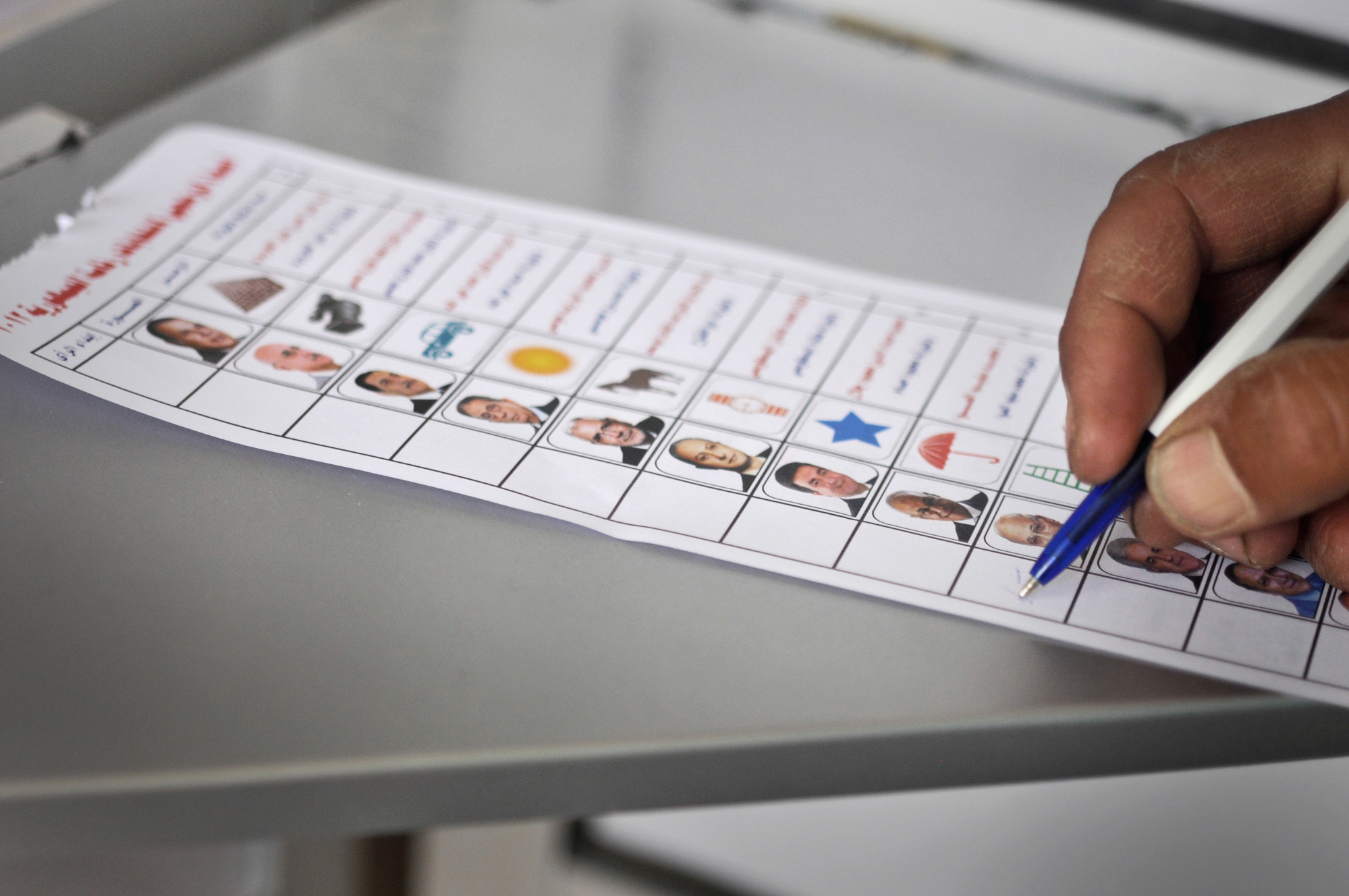 This weekend, the Egyptian government released a presidential election law to govern the upcoming elections for a new Egyptian head of state. Aside from having certain required provisions, the law may allow for the violation of civil and political rights in Egypt largely due to the finality of the decisions of the Presidential Election Committee and the various provisions enshrining the role of that body in the campaign media landscape of Egypt.

The law calls for a nationwide majoritarian election, which can take place over one or more days. In several areas, the law allows for a second round of elections, but it does not provide the criterion for when such a round would be appropriate or required until Article 39. Under this article, a candidate must win at least 50%-plus-one votes. If this number is not met, the top two vote-getters will run in a run-off election. Aside from the unusually late appearance of such a fundamental aspect of electoral design, many other concerns exist with the law. Below are more detailed notes and some concerns about specific provisions of the law.

Under Article 36, a candidate running unopposed can be elected if at least 5% of the registered voters cast ballots for him. If this does not occur, the election is run again. It is unusual for an election law to prepare for the possibility of a presidential candidate to run unopposed, especially considering that two candidates have already declared intentions to run. While this could be simply a sign of the law accounting for all possible circumstances, this could also be interpreted as a signal that the government may disqualify all but one preferred candidate.

Lastly, Article 12(9) states that a candidate must affirm that he has not been convicted of any crime of untrustworthiness.

It is unclear, however, how this body interacts with the National Elections Commission (NEC) established by the constitution. Under Article 209 of Egypt’s new constitution, that body is “administered by a board made up of 10 members selected equally from among the vice-presidents of the Court of Cassation, the presidents of the Courts of Appeal, the vice-president of the State Council, the State Affairs and Administrative Prosecution.” Moreover, under Article 208, the NEC is “exclusively responsible for managing referenda and presidential, parliamentary and local elections.” The jurisdictions of both bodies are incredibly similar, though both are given exclusive authority over their competencies. There is no apparent benefit to having two separate committees, the memberships of which arise from similar judicial bodies, that both have exclusive jurisdiction over largely similar functions of electoral administration. Indeed, they are both structured as electoral management bodies (EMBs).

Regarding the setting of dates for the election, Article 16 states that the PEC must announce a final list of eligible candidates “at least 20 days before elections.” Article 18 sets the campaign period from the day the candidates are announced until two days before the election. Campaigning can only occur during this time. Generally, the PEC has a wide range of discretion with respect to setting timetables with respect to administering the presidential elections.

The PEC has broad discretion over much of the administration of this election, and the area of media and campaigning is no exception. First, Article 19(2) prohibits the “threatening of national unity and using religious slogans to divide the public or to discriminate among citizens.” Similar language has been used to suppress individuals campaigning for a “no” vote during the recent constitutional referendum as well as to marginalize Islamist parties.

Article 20 requires state-owned media to be committed to give equal coverage of candidates, and Article 21 lists requirements for publishing polls. Although these requirements have the potential to translate into incursions on freedom of speech, they can be reasonable and legitimate limitations in the volatile setting of transitional elections if administered sparingly and in an unbiased manner. Similarly, Article 22 sets a maximum for campaign spending (EGP 20 million), and Article 23 limits campaign contributions to 2% of that maximum. Article 24 prohibits campaign contributions from non-natural (juridical) or foreign persons. Article 43 specifies a fine for those who are registered to vote but do not do so without an excuse. This clause, though not regularly enforced, is common in Egyptian election law. Throughout the document, the PEC is given the discretion to determine violations and appropriate remedies.

Under Article 6(11), the PEC notably has the competency to “[establish] guidelines for the participation of the media and Egyptian and foreign civil society organizations in following the election process.” This gives the PEC the authority to regulate election-observers and media coverage during the election and (presumably) during the campaign period as well. Article 6(10) allows for the PEC to “[invite] voters to participate in the election,” and Article 8 allows the body to “educate citizens about the importance of the presidential election.” In the context of previous elections and referenda in Egypt, this may allow for the PEC to continue the state-run propaganda similar to the government’s urging of Egyptians to vote for the current constitution which was experienced earlier this year.

A previous version of Article 7 of this law allowed for the appeal of a decision of the PEC to the Supreme Administrative Court within one week after a decision is announced. This was similar to language found in Article 210 the constitution, which allows for the appeal of decisions of the NEC to the same body. However, the final version of Article 7 allows for no appeals of the decisions of the PEC to any higher authority, making the body the first and final word on electoral disputes within its listed competencies.  Later in the law, Articles 13-15 outline the procedures for appealing the original decisions of the PEC, but these appeals are reviewed by the PEC itself, not by any external actor. Lastly, Article 27 allows the PEC to set up regional subcommittees, and Article 28 both allows those subcommittees to count votes and allows approved media and observer groups to attend the vote-counting. Again, challenges to the decisions of the subcommittees of the PEC are only heard by the PEC, not by any other authority.

Largely because of the inability to appeal the decisions of the PEC described above, several individuals and groups have expressed concern with the law, such as the Nour Party, Tayar al-Sha’aby, the Egyptian Organization for Human Rights, Dostour Party, Mohamed Abdel Abdul Aziz (Tamrod), Mohamed Kamal (April 6th Movement), Mohamed Fasil (Kefaya Movement), Khalid Ali, and Nour Farahat. These detractors have generally argued that this law violates Article 97 of the constitution, which states, inter alia, “The State shall guarantee the accessibility of judicature for litigants and rapid adjudication on cases. It is prohibited to immunize any administrative act or decision from judicial review.” This point is debatable, however, as the PEC is composed entirely of members of the judiciary, and as such, it could structurally be considered a judicial body (not an administrative one). That interpretation would mean that the internal challenges of the PEC’s decisions do legally constitute judicial review within the meaning of Article 97. However, as the similarly structured (and similarly functioning) National Elections Commission created in the constitution allows for appeals to the Supreme Administrative Court, one could argue that the constitution would envision any Egyptian EMB to also issue decisions appealable to the Supreme Administrative Court.

This election law creates some of the necessary guidelines required for the administration of an election, including many provisions regarding out-of-country voting, equal-time media provisions, and electoral fraud protection. However, Article 47 prohibits insulting members of the PEC, Article 48 prohibits the use of intimidation or terror during the election, and Article 52(1) prohibits the threatening or use of force to prevent others from voting. These articles present a potentially dangerous mix of protecting the electorate and inhibiting the free political expression of Egyptians. Along with the points noted above, and considered in its entirety, this law may lead to violations of the political and free expression rights of Egyptian citizens.

Moreover, the PEC has broad discretion over the administration of the election, and its decisions are not appealable to an external body. The PEC is also composed entirely of presently-empaneled members of the judiciary. This creates a potential for discrimination against candidates who are out of favor with the judiciary by the possible use of the various not-externally-appealable powers of the PEC to disqualify potential candidates.

While laws themselves do not render an election free and fair or illegitimate, this law allows the government, and specifically the PEC, broad discretion to make policies and take actions that could call into question the legitimacy and reliability of the results of the election. Given the actions of the interim government so far, from passing an anti-protest law to the propaganda campaign and opposition crackdown leading up to the recent constitutional referendum, this law offers little in the way of signs that the interim government intends to change course during the upcoming presidential campaign and electoral periods.