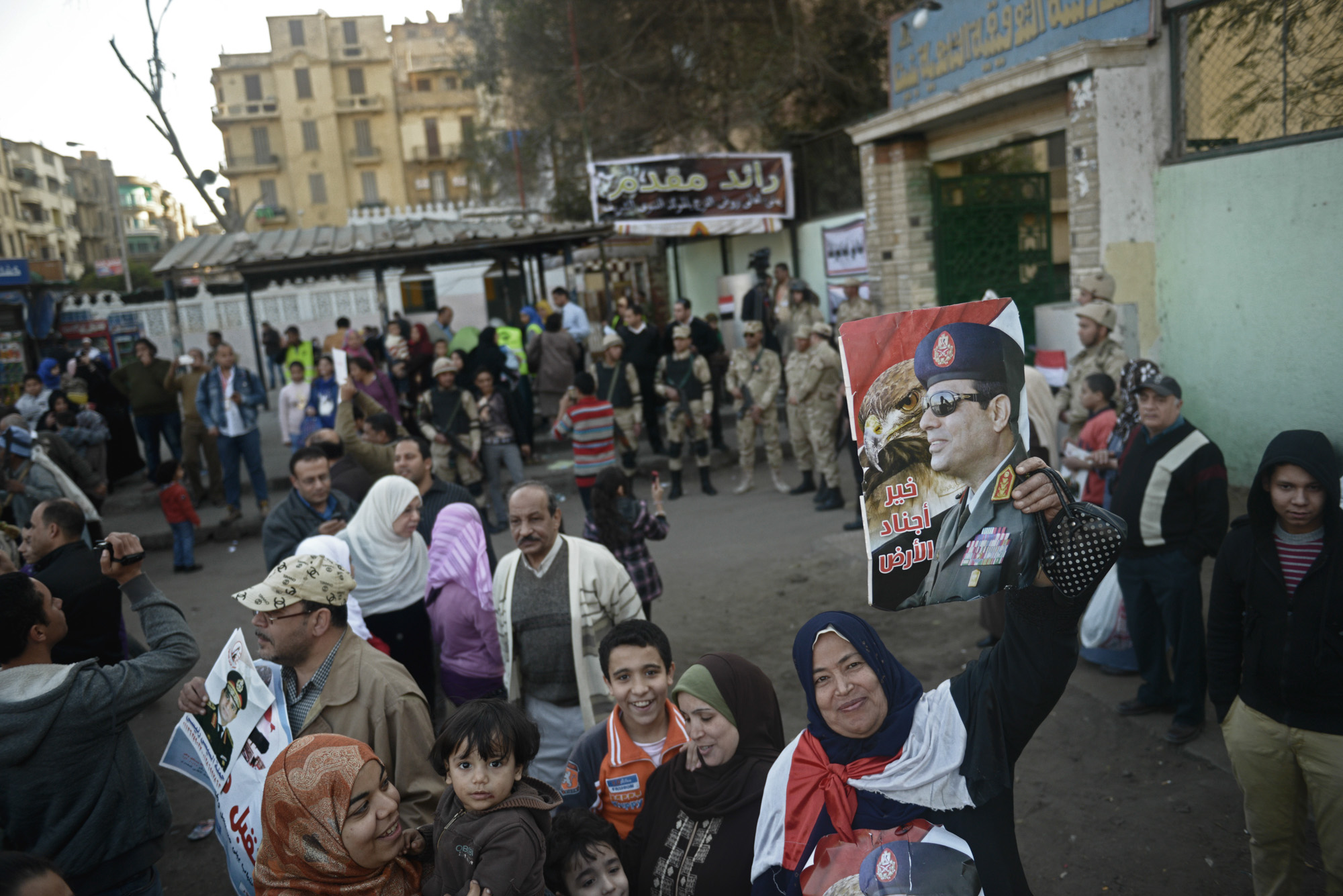 By most accounts, Field Marshal Abdul-Fattah al-Sisi is predicted to be a candidate in the Egyptian presidential elections of 2014. Despite not having formally announced his intention to run, many hypothesize that he will become Egypt’s next head of state. Sisi has hinted with some indication on the possibility of an impending run. And thus far, all seems to be on track for the Field Marshall: the army has offered its blessing, and he recently professed that he cannot “ignore the “majority” of Egyptians” who want him to run.

Among those “leading the push” for Sisi to run are Egyptian women; former Prime Minister Hazem Beblawi alluded to this constituency in a comment, pointing to Sisi’s “handsome looks” as a reason women would vote for the military general. Yet despite how sexist Beblawi’s comment was, it is difficult to overlook how charmed some women are with the Field Marshall. Ghada El Sherif, a columnist with Al Masry Al Youm newspaper is amongst those mesmerized by Sisi. El Sherif recently wrote a column titled “Sisi, you just need to wink,” declaring that she would be willing to be a second wife to the Field Marshall if he wanted to exercise the right to polygamy permitted to him under shari’a. She went on to paint Sisi as Egypt’s savior from the Muslim Brotherhood rule. Additionally, writer and actress Lubna Abdel Aziz wrote a glorifying essay of Sisi in Al-Ahram drawing upon “William Shakespeare, Napoleon Bonaparte and the Chinese philosopher Lao-tzu,” while describing Egyptians captivation with the Field Marshall, and their admiration for the Egyptian military.—a captivation she attributes to a centuries-long cultural history of military veneration. And the admiration women hold for Sisi extends further; a simple video message from an average Egyptian woman to President Obama recently went viral, the woman crying: “Al-Sisi, yes. Al-Sisi, yes. Morsi, no. Morsi, no.”

Clearly, Sisi has charmed many of Egypt’s women, is he the right candidate for them? Can Egyptian women entrust that the popularly revered military man will reform Egypt’s streets to be safer for them? More importantly, will he be able to deliver on his rhetoric and bring about policies that will address the gendered reality that negatively affects the 49.8% of the population that may “demand” that he run?

Any candidate seeking the vote of Egyptian women must be first aware of the leading issues stalling this constituency’s inclusion, and mobilization. As well, the candidate must be ready to address these issues through public dialogue and swift enactment of policies in the post-transitional period. Most pressing among these concerns is that of sexual harassment and violence. The growth in popularity of harassment in Egypt as a method to deter women’s engagement in public spaces is indeed truly alarming. A UN Women study revealed that 99.3% of female respondents experienced sexual harassment in Egypt, supporting Emily Dyer’s report on the many Egyptian women who professed that “sexual harassment and assault have worsened in both frequency and severity following the 2011 revolution.” It will be imperative that the next president of Egypt to take proactive measures to ensure that sexual harassment and violence are combatted not only on Egypt’s streets, but within governmental facilities as well.

The participation of Egyptian women in the events that led to the toppling of Hosni Mubarak during the January 25 revolution is undeniable. However, despite the prominent role that women played throughout the revolution, the systematic targeting of women through acts of sexual harassment and violence in public spaces (and Tahrir Square specifically) revealed the gendered nature of these spaces.

Other incidents have also undeniably showcased the degree to which public space is gendered—incidents that have extended past the revolution to present day, growing beyond the locale of Tahrir Square. This environment can be understood by probing some of the targeted crimes of sexual harassment and violence. Most notable are the crimes carried out by state actors—security forces, police, or thugs—baltagiya (plainclothes agents hired by the state in an attempt to conceal their role in assaults). The systematic use of harassment raises several questions surrounding the State’s motives for the targeted crackdowns on women, chief among them: would a Sisi presidency see the end or the continuation of the targeted harassment of women?

Disparity of Consequences for Equal Participants

There has been a constant targeting of female protestors since the 2011 revolution, extending to present day. In March of 2011 17 female protesters were arrested in Tahrir Square and subjected to virginity checks by army medical personnel. Major General Abdel Fattah al-Sisi justified the military’s actions, stating these were: “to protect the girls from rape, and soldiers and officers from accusations of rape.” Although a court ruling banned the use of virginity tests following this incident, a recent news article reported that four women were again subjected to virginity tests while being held in government detention facilities. Another infamous attack was that against the “girl in the blue bra.”  Footage and a picture surfaced online showing a group of security forces dragging, beating, and kicking the exposed body of a female protester. It is difficult to distance the now-Field Marshal from his past statement, and it is equally difficult to brush aside the past actions of security forces against Egyptian women. If faced with a future situation where a decision must be made to “protect” either Egyptian women or the military, on whose side would the decorated military career man fall?

Additionally, there has been speculation regarding the involvement of other, supposedly “non-state,” actors in assaults against women—assailants who carry their attacks out with no fear of punishment. Among these attacks are 19 cases documented in an Amnesty International report developed in conjunction with the Anti-Sexual Harassment/Assault (OpAntiSH/A) group on the second anniversary of the January 25 revolution. The report notes that some activists “believe that the sexual assaults on women are organized and coordinated—possibly by state actors—with the aim of silencing them, excluding them from public spaces and the political events shaping Egypt’s future, and breaking the resistance of the opposition.” Equally distressing is the report written as a solidarity statement published on the website of the network Women Living under Muslim Laws (WLUML). This statement reports that “186 women were subjected to gang sexual harassment and rape in Tahrir Square and surrounding areas in the period between June 30 and July 7, 2013,” with few details being known about their attackers.

Whether or not the perpetrators of these acts of violence were state security forces (or some variation thereof), the acts still point to the broader issue of security in the country. These attacks reveal the gendered nature not only of public space, but of security more generally. Improving the security situation for women will require commitments from the next leader both to investigate these specific crimes and to open a larger public debate on security sector reform.

While the evidence presented in this essay may lead to the conclusion that Sisi has not yet proven himself worthy of promoting a just future for Egypt’s women, past leaders have not fared much better. Following the violent targeting of women protesters described in the previous section, the Muslim Brotherhood remained silent in condemning the state’s actions. The group did not participate in a protest which united 10,000 women in their calls denouncing the abuse of the military on women. A move, or lack therefore, which promoted many to accuse the group who “tout their defense of women’s honor” as not wanting to jeopardize the parliamentary elections at the time. Shortly afterward, Islamist groups won 70% of parliament in January of 2012, and Salafi parliamentarians called for the revival of the practice of female genital mutilation (FGM). Their calls to revive this practice, proven to be detrimental to women and baned in 2007, were based on claims that “notable Egyptian scholars justified it as part of the ‘prophetic’ Sunnah.” The effort to decriminalize FGM was not the only one taken up by Islamist groups through parliament, as the Muslim brotherhood sponsored a mobile health clinic which performed the procedure for a low fee. The actions of such powerful political forces point to some of the underlying structural and societal currents that are at work, and which have prevented the development of a political platform favorable to women.

Thus, if (or when) the revered Field Marshal does officially announce his bid for the presidency, Egyptian women should not automatically breathe more easily, as many of the social and legal issues further marginalizing Egyptian women are structural and in need of reform. For instance, Egypt currently lacks any law that covers sexual harassment in public places or work environment. Moreover, no governmental department is tasked with constructively addressing sexual harassment, so when incidents do occur, like the sexual harassment of a university student by a mob of fellow students Monday, we are left with the problematic shifting of blame from the assailants to their victims as the prevailing social narrative. In instances where there are laws in place to address violence against women, such as the law banning the practice of FGM, its poor enforcement is in turn reflected in a statistic: 91 percent of women ages 15-49 today in Egypt are circumcised.

The lack of legal frameworks that would build a more gender-just society extends beyond addressing laws protecting Egyptian women from violence; there is also a dearth of laws ensuring women’s rights. Due to the adoption of shari’a as the source of legislation governing family laws, women are not entitled to equal inheritances and must obey their husbands by law. A future presidential candidate must address the structural hurdles halting women’s development in Egypt and push forward initiatives to enforce existing laws and implement new protections successfully. In turn, when laws are adopted ensuring women’s rights and protections (and these are properly enforced), a dialogue addressing the socio-cultural stigmas surrounding reporting sexual harassment, not circumcising girls, and gender parity can become the norm.

What remains to be seen is how Sisi, celebrated as a “national savior” and the “protector” of Egypt’s January 25 revolution, will extend his alliance and support to Egyptian women. Will he make a public call denouncing continued sexual harassment and violence against women? Will he move to publically condemn his officers and hold harassers accountable on the vicious attacks? Will he introduce policies and structural reforms that would make public spaces safer for women? Will we see a de-gendering of Egypt’s streets as Sisi situates himself to run as the candidate for all Egyptians? Time will tell, but the past does not bode well for such hopes.