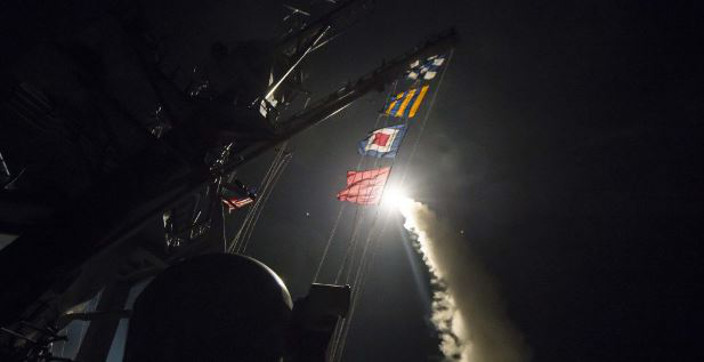 At first glance, it may appear that U.S. President Donald Trump has won this round thanks to his attack on the Shayrat airfield, which was used by Syrian President Bashar al-Assad to attack Khan Sheikhoun with chemical weapons. The airstrikes were presented as a deliberate action to showcase the difference between Trump and his predecessor, President Barack Obama, scoring Trump a point in the comparison. Assad’s renewed use of chemical weapons demonstrates the failure of Obama’s handling of Assad after his chemical weapons attack on Ghouta, after which Obama threatened military action against Assad before Russia intervened on Assad’s behalf and convinced Obama to accept Assad surrendering his chemical arsenal to avoid attack. Assad either did not hand over all of his chemical weapons, or has been able to procure new ones.

This action helps Trump fend off the increasing questions about and investigations into his relationship with Russia leading up to the election. With this action, he successfully changed the domestic conversation in the United States from one about the ongoing upheaval in his administration to a debate on foreign policy, centering on Syria. This foreign policy debate is one Trump will win, since he can always say that the attack was limited and successful, then call it a day, promising not to intervene in Syria again.

Before any detailed analysis of the effects of the U.S. strike on the Syrian civil war, it is a good bet that it will achieve the immediate goal of limiting the use of chemical weapons, but perhaps not much else. So far, Trump has not had a strategy for a real military intervention in Syria to match the Russian, Iranian, or Turkish military presence there. America’s alliances in the struggle against the Islamic State have shifted, simultaneously supporting both the Kurds and Turkish government forces even as those groups battle each other.

Now, a year and a half after Russia began its intervention in Syria, the Russians have successfully secured Assad’s reign and his control over Damascus and Aleppo, and forced the opposition out of the major cities and into the north, where Jabhat Fatah al-Sham (formerly Jabhat al-Nusra) is in control. Assad and the Russians are fully aware that the main political threat to them comes from the internationally supported moderate opposition, especially while it held ground in the major cities. By gradually ending this opposition’s urban presence, Assad seems to be more secure than at any point since 2011.

On another hand, Turkey’s Operation Euphrates Shield has ceased, after taking control of al-Bab after the Kurds surrendered regions bordering the Turkish-supported Free Syrian Army to the Syrian regime. The regime attempted to block the Turkish advance to Raqqa and further east, where the Islamic State and the Kurds are. With that, the Turkish army had to declare a “victorious” end to the mission, which may explain the Turkish enthusiasm for the U.S. strike. Turkish President Recep Tayyip Erdogan even declared the missile attacks as inadequate, as more U.S. strikes against Assad may facilitate a Turkish advance to the east. This advance would allow the Turkish army to take over Kurdish-held land and stop them from establishing their own state, which is the primary Turkish goal behind Euphrates Shield.

For the Syrian opposition, the end of the Turkish operation was a blow to the hopes of the Free Syrian Army to reinstate itself as a major player in the war after receiving multiple strikes from armed Islamist groups. Jabhat Fatah al-Sham is still trying to solidify its control over the northwest of Syria through its Jabhat Tahrir al-Sham alliance with mostly armed Islamist groups, including some more moderate movements to avoid a US attack.  The Tahrir al-Sham alliance is Jabhat Fatah al-Sham’s attempt to create a continuous war front should the opposition succeed in reaching a political resolution with Assad.

For the Kurds, after they secured their front with Turkey by handing it over to Assad, they are now very slowly moving toward territory controlled by the Islamic State, albeit without any real accomplishments. With that in mind, they are now the U.S.’s strongest potential ally should it decide to engage in a wider operation to take back Raqqa.

What did the U.S. strike accomplish?

The U.S. strike will limit Assad’s use of chemical weapons and restore American influence in the Syrian war, including a stronger American involvement in political negotiations. However, Assad and the Iranians have so far been successful in dragging out the negotiations, gaining time while rendering the negotiations useless and ineffectual, followed by returning to their military plans.

Assad’s use of chemical weapons is not so much a military strategy as it is a desire to abuse his adversaries and the civilians living in areas they control. That is to say that, even without these weapons, Assad could continue unhindered with his military plan with both Russian and Iranian support, carrying out massacres against civilians that would largely be forgiven by the international community if they are carried out using traditional weapons.

Trump’s lack of a comprehensive strategy concerning Syria will make Assad’s mission of absorbing American adventurism without medium-term consequences easier. This is very likely due to the complexity of the situation in Syria and the absence of a strong moderate opposition that America can rely on. This is especially true because Turkey, which retains wide influence on many Islamist groups, has bet on the Free Syrian Army as its fighting force. The Free Syrian Army has faced intense opposition from Jabhat Fatah al-Sham and its allies, which has accelerated the Islamist-on-Islamist polarization witnessed in the north of Syria. So far, Jabhat Fatah al-Sham, which is the leader of the camp refusing to directly cooperate militarily with Turkey, appears to be winning this fight.

What comes after the U.S. strike?

The Syrian crisis is now a military crisis. Regardless of the importance of international symbolic moves and angry political statements, the final word will belong to whoever affects the war’s military scene. Russia knew this when it intervened militarily in Syria in the end of 2015, aiming to reshape the whole military scene and not just carry out one-off strikes. If the U.S. strike is not followed by a change in the military map, whether through new anti-Assad military alliances, safe zones, or no-fly zones, the missile attack will be nothing more than a tempest in a teacup.

It is clear that—alongside removing Assad’s military advantage and thus forcing him to  negotiate with the opposition—the political solution in Syria depends on the formation of a moderate faction. International anti-Russia players such as Turkey, Saudi Arabia, and Qatar may be able to pressure the United States into arming that faction better to force Russia and Iran to seriously negotiate and end the war. Until this moderate opposition comes into existence, any political negotiations will be unable to reach any real solutions.

On the other hand, the U.S. strike gives the Syrian opposition an opportunity to re-market itself internationally. This will depend on its ability to take the upper hand with the extreme Islamist groups, which it can do with the help of the international community. This would be met with extreme opposition from Jabhat Fatah al-Sham and its allies due to their fear that any international support of the opposition and pressure toward a political resolution would include ending the presence of extremist groups and their control of northern Syria, pushing Jabhat Fatah al-Sham to accelerate their unilateral operations to control the situation there.

Even though the strike will allow the United States to enforce some of its opinions on the Syrian negotiations, the negotiations themselves remain structurally flawed as long as they maintain Assad’s presence or lack the possibility of any operations to remove him from power. This makes the negotiations nothing more than a long, drawn-out surrender by the Syrian opposition, going on in parallel with Russia’s continued squashing of the remaining opposition while Jabhat Fatah al-Sham does the same. The world finds itself stuck with an extremist Islamist faction that refuses any direct international support, as well as refusing to participate even in cursory negotiations that would give it legitimacy, to say nothing of its close relationship to al-Qaeda. Short of a substantial intervention, the international community will have no choice but to overlook Assad’s maniacal use of force to quash this opposition and intervene intermittently to lay down some guidelines as to the weapons to be used in that process.

The more optimistic scenario is that the U.S. strike will lead the Trump administration to pay closer attention to the broader situation in Syria aside from the war on the Islamic State, and that the administration will restore the political balance that was lost with Russia’s intervention. Russia imposed its hegemony on the military and political situation in Syria, effectively removing the idea of abandoning Assad from any future negotiations. Any American intervention that does not reintroduce the idea of removing Assad remains enthralled to the Russian playroom for Syria, thus allowing Russia to impose its power in the long run.

Removing Assad’s future from the table during negotiations means that the extreme Islamist factions will continue to control the field against the moderate groups, who will in turn be accused of entering into a formal surrender process. With that, the results of the negotiations and political solution will be neutralizing certain political powers and continuing the war against others. On the other hand, making the removal of Assad the core of negotiators would give the more moderate factions greater legitimacy among the opposition as the group able to accomplish things, enabling it to reach a political solution and implementing on the ground.