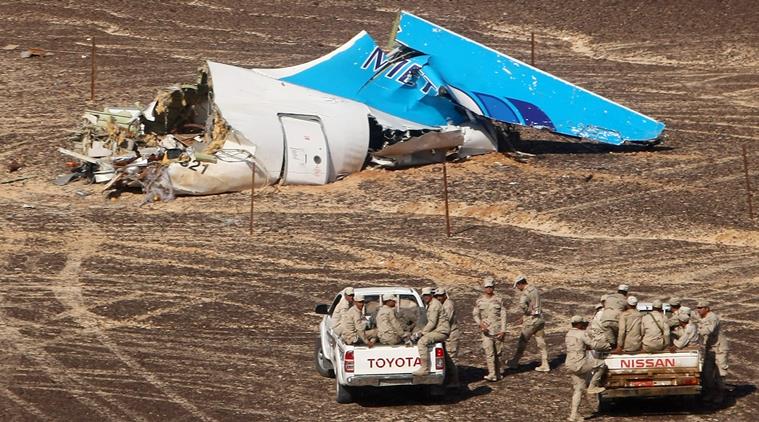 In this photo made available Monday, Nov. 2, 2015, and provided by Russian Emergency Situations Ministry, Egyptian Military on cars approach a plane's tail at the wreckage of a passenger jet bound for St. Petersburg in Russia that crashed in Hassana, Egypt, on Sunday, Nov. 1, 2015. The Russian cargo plane on Monday brought the first bodies of Russian victims killed in a plane crash in Egypt home to St. Petersburg, a city awash in grief for its missing residents. (Maxim Grigoriev/Russian Ministry for Emergency Situations via AP)

On October 31, a St. Petersburg-bound aircraft full of Russian nationals disintegrated mid-flight over Egypt’s restive Sinai Peninsula. The official Egyptian investigation into the crash is still underway, but preliminary findings released on December 14 showed no “evidence of terrorism.” Security officials in the United States, Britain, and Russia, however, have attributed the crash to a bomb on board, which the Islamic State’s affiliate in the Sinai, Wilayat Sinai (or Sinai Province), claimed.

Amid attacks around the world claimed by the Islamic State or its affiliates, international media plays an important role in reporting on basic facts and the ensuing political responses to events. When it gets these facts wrong, or when it misinterprets, oversimplifies, or removes important context, policy suffers. Coverage of Wilayat Sinai’s activity, like that claimed against the Russian aircraft, is a telling example. The popular conflation of Wilayat Sinai’s attacks with those of the Syria-based Islamic State “core,” irrespective of the latter’s actual level of involvement, takes away important nuance. Recent political commentary by presidential candidates reflects and perpetuates these inaccurate narratives, oversimplifying the relationship between the IS core and its “provinces” and failing to localize policy recommendations to target affiliates. The repetition and widespread acceptance of these erroneous perceptions could negatively impact the formulation of policies aimed at defeating the Islamic State and its affiliates in Egypt, Libya, and elsewhere.

U.S. media sources often miss the distinction. Misinformed reporting on the matter is absorbed as fact and then recycled through the media machine. Superficial journalism not only confuses discussions on how to combat the organization, but it gives the false impression that the Islamic State is somehow devouring the Middle East. That it has formalized relationships with groups across the region may be true, but these affiliates are often merely rebranded entities that have existed in some form or another for many years.

Even in outlets such as the New York Times, the Atlantic, Fox News, and CNN, reports often fail to even name Wilayat Sinai as an actor in the Russian plane incident. The Atlantic, for example, characterized the crash as an IS attempt to increase “expeditionary attacks outside its caliphate,” while the New York Times wrote that IS was “adapting, keeping its international profile high by launching foreign attacks.” Both descriptions suggest that the Islamic State core group has expanded its reach beyond Syria and Iraq to include Egypt and other places recently affected by terrorism. This implicitly denies the role of Wilayat Sinai, which existed as Ansar Bayt al-Maqdis until late 2014 when it pledged allegiance to the Islamic State.

The rough narrative that has emerged is that IS brought down the plane in retaliation for Moscow’s intervention in Syria and as proof of the Islamic State’s power in other places. The twelfth issue of the Islamic State’s English language magazine, Dabiq, references the motivation for the attack similarly (as retaliation for Russia’s role in Syria), but explicitly attributes the crash to Wilayat Sinai.  Russian airstrikes against the Islamic State in Syria, dubiously characterized by the Kremlin as a response to the plane crash, only reinforced the widely held perception that it was, in fact, the work of the core group in Syria. However, this overgeneralized account fails to take into consideration potential motivations from Wilayat Sinai and, instead, takes the core group’s official statement at its word, while ignoring Wilayat Sinai’s role.

To further complicate the issue, media outlets have not only failed to name the two groups separately, but also fail to distinguish the plane crash from other attacks like those in France, Lebanon, and California. This impulse to tie the plane crash to unrelated attacks confuses the distinction between IS, its affiliates, and so-called lone wolves. This media-produced narrative is problematic because it fails to present an accurate portrayal of the groups’ relationship, distorting dialogue on anti-IS strategy. If this superficiality leaks into policymaking discussions, counter-strategies could lose important nuance. From what politicians and political pundits have said so far, that possibility might be a troubling reality.

The “Islamic State threat” is now a central theme in national-level policy discussions, due in part to the recent attacks in Paris and California. Take the most recent Republican presidential debate, held on December 15: The nearly three-hour-long exchange, which attracted over 18 million viewers, focused almost exclusively on the candidates’ strategies for combatting the Islamic State. This centrality underscores the importance of getting language right.

But recent statements by these and other politicians generally reflect three errors. They either 1) fail to distinguish between IS and Wilayat Sinai, yet attempt to produce a strategy to combat the group; 2) acknowledge the Islamic State’s affiliate groups, but fail to present a comprehensive strategy that adequately addresses underlying local grievances; or 3) do not attempt to provide any nuanced understanding of the Islamic State or a realistic strategy. Republican presidential candidates Jeb Bush and Marco Rubio fall into the first camp. Official statements on their websites reference the Islamic State’s expansion beyond Syria and Iraq, to Egypt and other countries. While Rubio and Bush’s platforms point to IS as a serious international threat, they do not acknowledge or discuss the role that affiliate groups play in this expansion. Rubio goes on to discuss the Sinai “airliner bombing” without offering any details on the location or perpetrator of the attack. Democratic presidential candidate Bernie Sanders similarly labeled the plane crash as “apparently…an ISIS bomb.” Members of Congress from both parties have similarly conflated the core and the provinces, with Republican Senator John McCain saying that the plane was “likely blown up by ISIL,” and Democratic Representative Bill Keating describing the plane crash as an indication of the Islamic State’s expansion outside of Syria and Iraq.

Democratic presidential candidate Hillary Clinton falls into the second camp. Clinton detailed her anti-IS plan in a speech at the Council on Foreign Relations. While she did mention the Islamic State’s regional affiliates, she focused almost exclusively on Syria and Iraq,  not on Wilayat Sinai or the provinces in Libya and other places. But affiliate groups do loosely fall under one of Clinton’s proposed three steps to combat the Islamic State: “disrupt and dismantle the growing terrorist infrastructure that facilitates the flow of fighters, financing arms, and propaganda around the world.” Destroying the Islamic State in Syria and Iraq may weaken affiliate groups but would probably not destroy them entirely, as many of the groups predate the announcement of the caliphate and are to at least some extent self-resourced.

In the third group we find individuals like Republican presidential candidate Donald Trump. Despite his calls to “bomb the shit out of ISIS,” Trump’s anti-IS strategy reveals little depth, and shows no distinction between IS in Iraq and Syria and its regional affiliates. Despite clear deficiencies in understanding, Trump’s comments are an important part of the dialogue on anti-IS strategies, given his lead in Republican primary polls. Media coverage of Trump’s comments promulgates the language he uses which then continues to inform his comments, creating a problematic positive feedback loop. Policymakers should be meticulous in preventing this oversimplification from negatively affecting policy.

When crafting anti-IS strategy, policymakers must be wary of the media and political personalities’ reckless conflation of Wilayat Sinai and the Islamic State. In synonymizing the groups, commentators are losing the unique circumstances that define them, blurring otherwise exploitable differences, like arms and recruitment streams. It also downplays the seriousness of Wilayat Sinai’s threat, masking its fighters’ operational acumen behind the veil of the Islamic State. This affords Sinai militants a layer of protection from western scrutiny, in turn giving them some degree of impunity for their violent acts.

Language composes only a segment of a much bigger problem. American policymakers are still unable to effectively and quickly adapt to new challenges, despite years of experience building and implementing counterterrorism and counterinsurgency policies. It took months, for example, before U.S. officials were able to recognize the basic differences between IS and al-Qaeda. Indeed, the Islamic State is being fought using the authorization of the use of military force Congress approved in 2001 to counter al-Qaeda. Avoiding cookie-cutter strategies such as this is crucial for combating highly adaptive groups like Wilayat Sinai. Rather than lumping the Sinai problem under a uniform anti-Islamic State strategy, U.S. policymakers should coordinate existing strategies and use whatever momentum it has to its advantage. Synchronizing U.S. security assistance to Egypt with broader military efforts in Syria and Iraq will not only preserve important distinctions between IS affiliates, but it will also enable a concerted response that respects their logistical and operational overlap.