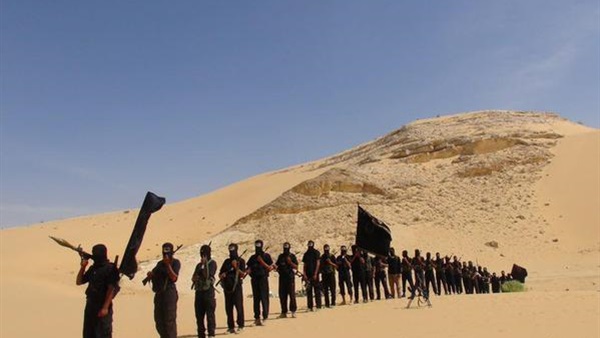 Wilayat Sinai, the Islamic State’s “Sinai Province,” is using its near-monopolistic access to Sheikh Zuweid, Arish, Rafah, and other areas in Sinai’s northern region to create its own, unchecked narrative of success. Echoing the much-touted territorial domination of Islamic State’s central organization in Iraq and Syria, Wilayat Sinai is exploiting the Sinai media vacuum to forge a bolder identity—one that heralds expansion, social control, and puritanism. With little space for an independent media to scrutinize its claims, the group has carte blanche to write its own narrative.

Following years of woefully inadequate “counterterrorism” operations and an onslaught of recent tactical victories, Wilayat Sinai is trumpeting a tale of triumph. “After two and a half years since the beginning of military operations, Wilayat Sinai has proven its control over different areas in southern Rafah and Sheikh Zuweid,” claimed a Twitter account sympathetic to the organization. The post included pictures of a burned-out armored personnel carrier and a soldier’s empty, unbuttoned uniform. “Military operations have been absent for more than three months,” the user continued in another tweet. The organization’s Twitter accounts, although frequently closed due to their inflammatory content and overt support for the Islamic State, amass hundreds and sometimes thousands of followers.

Some of these claims have merit. Last July, the group made international headlines when it captured and held parts of North Sinai’s Sheikh Zuweid for several hours, the governorate’s second second-most populous city with an estimated 60,000 residents. Wilayat Sinai has not carried out a ground operation of the same magnitude since, but the geographical scope of its activities has broadened, as have their frequency and operational effectiveness. For example, in late February the group’s operatives carried out for the first time an attack on security forces in Bir al-Abd, an area nearly 50 miles west of provincial capital and militant hotbed Arish, and followed up with another attack only days later. Its operations in central Sinai, specifically the area around al-Hasna, a small city about 50 miles south of Arish, have likewise resurfaced after more than two years of relative calm.

This operational expansion comes despite the military’s heavy-handed crackdown in North Sinai, which has by its own account killed thousands of alleged militants over the past few years. The security apparatus appears hard-pressed to contain the comparatively small affiliate of the Islamic State, despite the military’s imposition of strict travel restrictions, frequent (and often indiscriminate) shelling and airstrikes, disruption of water and electricity services, and continuous renewal of a restrictive 7:00 p.m. curfew. Seen in this context, Wilayat Sinai’s growth is not only alarming in and of itself, but serves as powerful ammunition for the organization’s exploitative propaganda, which portrays Cairo’s growing ineptitude for governance in North Sinai.

Recently refined but rooted in old practices, Wilayat Sinai’s narrative extends in multiple directions. In February, a statement authorizing “Islamic Police” to impose sharia in Rumeylat tribal areas made the social media rounds. Wilayat Sinai has afforded itself powers of arrest and is enforcing its own interpretation of the law. In the past month alone, the group has taken into custody at least a dozen members of local tribes, pointedly describing these kidnappings as “arrests.”

Accompanying this imagery of an alternative, competent authority, the organization has also attempted to balance good and evil personae in its propaganda, mirroring the Machiavellian notion of the feared-yet-loved leader. When Wilayat Sinai’s interrogators discover guwasees (spies, or people who collaborate with security forces) among apprehended locals, for example, they brutally execute them, often by decapitation; but when these investigations turn out clean, the arrestees, who are interestingly referred to as muwatineen (citizens), are released. Draconian deterrents contrast markedly with images of food rations, living allowances, and other handouts to locals, forming the type of push-and-pull social narrative that often defines these movements.

Positioning itself as authentically Islamic and further underscoring its ability to govern, Wilayat Sinai has extended its jurisdictional purview over all violations of sharia. Just before giving the territorial pronouncements referenced above, the group sent out an ominously worded message stating that gunmen were patrolling the area, looking for smokers and tobacco products, and it pledged “punishment” to anyone who violated the decree. Only days later, members of the group paraded what they claimed was 44 kilograms of seized heroin in front of the cameras, alleging that they had found it buried next to the home of a “spy.” Wilayat Sinai’s Islamic Police, in tandem with the Hisba (public morality police), later documented the incineration of an entire truckload of cigarettes cartons, in addition to what appeared to be marijuana plants.

A Media Vacuum in North Sinai

While it is impossible to disprove any of the stories cited above that Wilayat Sinai uses to promote its account of the situation in the area, it is also impossible to confirm their narrative. Repressive security measures snuffed out independent media coverage after Muhammad Morsi’s ouster in 2013, so reporting on the matter is immensely difficult and risky. Faced with laws that criminalize the use of unofficial information and heavily restrict mobility, journalists are unable to access the northern parts of Sinai. The media blackout has enabled the government to maintain its own narrative of success, which boasts of grand but unseen development projects, obscures gross human rights violations, and portrays the military as more successful than it actually has been.

Wilayat Sinai and its loyalists, undeterred by the threats of punishment from what they view as an illegitimate authority, have free rein to fill the gaping media void with ostentatious—or even entirely fabricated—claims. Coupled with its use of force and self-proclaimed imposition of sharia, the group’s near-monopolization of nongovernment reporting not only enables them to influence a larger number of people, but it allows them to exaggerate their expansion and control, propagate puritanical beliefs, and insert into discourse a narrative of relative humanity.

The growing sophistication of Wilayat Sinai’s expansion-and-control narrative has implications for both American interests in Egypt and the broader fight against the Islamic State. During a recent meeting between Egyptian Foreign Minister Sameh Shoukry and U.S. Secretary of State John Kerry, Kerry praised Egypt as a committed partner in the fight against terrorism, yet offered little evidence for that characterization. Cairo’s steadfast resolve to wage what it describes as counterterrorism operations against Wilayat Sinai, without heeding the advice of allies like the United States, impedes timely and effective resolution of Sinai’s insurgency. Given the Islamic State and al-Qaeda’s growing foothold in Libya, Egypt fighting a full-fledged, two-theater war against Islamic State militants is not an unthinkable scenario.

U.S. policymakers should be frank with the Egyptian government, urging Cairo to ease its tough restrictions on independent media in order to open dialogue and give nuance to the polarized narrative. They should likewise continue lobbying the Egyptians to treat Wilayat Sinai as an insurgency, and not merely as a terrorist organization. For Egypt, this would entail, among other efforts, following through with critical development projects, job creation, and fair treatment of Bedouin; ceasing systematic demolition of homes in Rafah and other areas; and halting the military’s indiscriminate shelling and airstrikes. Along with maintaining its vital military assistance to the Egyptian security establishment, the United States should also push for greater intelligence cooperation between the two governments, especially as it concerns the insurgencies in Sinai and Libya.