After five years of protests, struggle, and change in government cabinets, parliaments, and presidents, Egypt is nowhere near where many had hoped when Egyptians took to the streets on January 25, 2011. Given the tumultuous environment in the Middle East and North Africa and particularly the rise of the Islamic State and the ongoing conflicts in Libya, Syria, and Yemen, many observers misdiagnose the Arab Spring as a mistake. This faulty view assumes that had the series of uprisings—starting in Tunisia on December 17, 2010—not occurred, the apparent stability under authoritarian rule in these countries would have endured for the foreseeable future. It mistakenly views the current conflicts, civil wars, insurgencies, and the reinstatement of authoritarianism in some countries as outcomes of the uprising, rather than as symptoms of longstanding problems and challenges facing these countries which had led to the uprisings but were never properly addressed.

Unfortunately, this misperception has led many international policy makers to juxtapose security and stability on one hand and freedom and democracy on the other—and to prioritize the former side. This perspective ignores recent history, when ostensibly stable regimes collapsed after a few weeks of protests.

This report challenges these assumptions by looking closely at all aspects of governance in Egypt: political engagement, rule of law, rights and freedoms, minority rights, gender equality, security and economic stability. The aim is twofold: to summarize how, despite the aspiration for change that emerged on January 25, 2011, Egypt has arrived at its current state; and to provide recommendations for how to move toward fulfillment of this aspiration in the current context.

In the eight sections of this report, we provide a brief background of the conditions before 2011, followed by a review of the developments over the past five years, and analysis to explain the factors and logics that have driven these developments. Each section concludes with recommendations of priority action points for Egyptian and international policy makers. 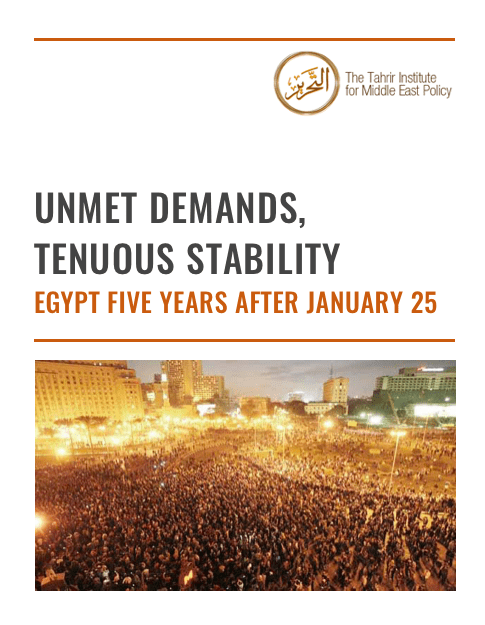 This report is based on the findings of long-term research projects conducted at the Tahrir Institute for Middle East Policy. Our research strategy follows a systematic process of data gathering, documentation, and analysis, upon which we formulate our advocacy positions. We begin our research with thorough documentation, as volatile situations and changing governments and rulers in Egypt have caused many political factions to attempt to cast recent history in their own terms. Per TIMEP’s mission, we are committed to highlighting local voices and understanding internal dynamics and nuance; thus, all our work is conducted in close collaboration with local analysts, researchers, journalists, and civil society actors.