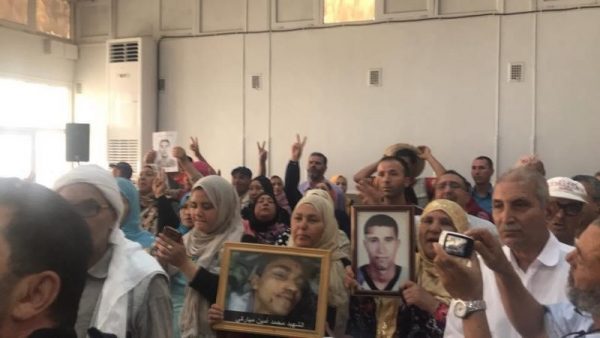 Families of those killed during the Tunisian revolution gather at the trial of their sons’ accused killers (photo courtesy of Emna Sammari).

In November 2016, the constitutional commission overseeing transitional justice in post-revolutionary Tunisia held its first public hearing for the victims of more than half a century of dictatorship. It took the Truth and Dignity Commission (known by its French acronym, IVD) almost three years after the adoption of Law No. 53 of 2013, commonly referred to as the Transitional Justice Law, to process and investigate more than 60,000 submitted cases of torture, assassination, and various human rights abuses and to host over 17,000 audition sessions, before the beginning of this first public hearing. The event—a first step toward acknowledging the atrocities of the country’s past—was streamed live on national television and in front of a large audience of Tunisian youth who had been wounded during the revolution and family members of those who died during it as well as politicians and activists. The event seemed to attract a large turnout from across the political spectrum.

Notably absent, however, was the sitting president, Beji Caid Essebsi, who occupied high public offices under both of Tunisia’s presidents since independence, Habib Bourguiba and Zine al-Abidine Ben Ali. It was not the last time that Essebsi would appear not to support the transitional justice process. At the end of October this year, Essebsi’s party, Nidaa Tunis, announced that it would be suspending legislative activities until the IVD was dissolved. And most vividly, attendees at the first day of the IVD’s closing conference in December 2018 noted the glaring absence of the president and other state officials. These episodes reflect that in the four years since the IVD was formed, Tunisia’s most prominent political forces, under Essebsi and Rachid al-Ghannouchi of the Ennahda movement—known among Tunisians as “the two sheikhs”—worked to undermine transitional justice and the IVD’s activities.

Both Essebsi and his son Hafedh, who is sometimes referred to satirically as the “crown prince,” opposed the IVD from day one, constantly denigrating the commission and its chairwoman, Sihem Ben Sedrine, a prominent opposition figure under Ben Ali. Essebsi was vocal during his 2014 electoral campaign with his call to end “digging in the wounds of the past and move on,” which endeared him to senior figures from the Ben Ali regime. While Tunisians were counting on the IVD to expose the truth, Essebsi was orchestrating a scheme to undermine it. Soon, a bill titled Economic Reconciliation Act (later renamed the Administrative Reconciliation Act) was introduced to the allied parliamentary blocs of Nidaa Tunis and Ennahda movements. For months, this draft law was discussed secretly between the presidency and the parliament. The act aimed, as explained by Nidaa Tunis officials at the time, to provide a sense of security for thousands of public servants under investigation for corruption since the revolution, as well as for a large group of businessmen who had been banned from travel since 2011 and whose capital and assets are frozen.

The bill passed in 2017, and unsurprisingly, former president Ben Ali was among the first figures to benefit from it, causing the court to drop some charges against him as a “high-level public servant.” The aim was a procedural defense akin to double jeopardy. If a court dropped accusations of misconduct because of their inclusion in the reconciliation act, Ben Ali and others could theoretically be protected from being tried on related charges by the Specialized Transitional Justice Chambers—the judicial system for cases arising from the IVD’s work—on the same (or similar) charges and on the same facts. This was seen by many as the reward for the former regime endorsing and campaigning for Nidaa Tunis during the last elections.

Problematic legislation such as the Administrative Reconciliation Act could have been struck down by the judiciary. Yet because Nidaa Tunis and Ennahda have dragged their feet, no constitutional court has been formed, despite repeated promises and a constitutional mandate to do so. This deliberate delay in forming a constitutional court serves to enable continuing violations of the freshly adopted constitution ahead of 2019 elections. If it had been established, the constitutional court could have reviewed the constitutionality of the act for creating a back door for figures of dictatorship to escape justice. In fact, a leaked document suggested that the Superior Magistrate Council was about to rule the act unconstitutional when the parliament adopted it. The Council’s determination demonstrates that the parallel process that was created by the act to sideline the IVD was likely built on unconstitutional claims aiming to destroy the whole process rather than safeguard it, establishing a path toward impunity instead of accountability.

Despite the lack of progress on transitional justice in parliament, the IVD continued its work and extended its own mandate until mid-December 2018. The parliament voted unanimously—but with no quorum—against the self-proclaimed extension of the IVD’s mandate, but because the Speaker’s office did not issue a decision on it and the government was not notified in advance, Prime Minister Youssef Chahed was able to approve the continuation of the IVD’s work.

Yet the IVD became a political tool in the competition between Ennahda and Nidaa Tunis, the latter of which likely sought to use it as leverage. In October, with the IVD’s final report looming, Nidaa Tunis walked out of parliament and threatened to obstruct all parliamentary business unless the IVD was dissolved. After Chahed shuffled his cabinet, with minor changes, Nidaa Tunis quietly returned to the chamber, praising the new ministers, and ultimately demonstrating that the primary goal of the walkout was not actually to force the dissolution of the IVD but for Nidaa Tunis to differentiate itself from Ennahda ahead of the 2019 parliamentary elections.

While the latest uproar over the IVD’s work was led by Nidaa Tunis, Ghannouchi and Ennahda have also undermined transitional justice processes, including that of the IVD, by using it as a bargaining chip in its coalition with Nidaa Tunis. Ennahda first denounced and then supported the reconciliation act, and Ghannouchi has expressed his support for a general amnesty after having previously called for a “purge” of the interior and defense ministries. In this latest crisis over the IVD’s term extension, Ennahda’s deputies in the parliament refused to vote on ending the process of transitional justice, while Ghannouchi was calling for the contrary at his party’s general congress.

Despite the political interference, Ben Sedrene and her commission have continued their efforts. The IVD promised to hold a three-day conference at the conclusion of its work to present to the public a summary of the past four years of investigations and hearings. This conference, which started December 14, is ongoing. Yet the IVD’s final, full report is very unlikely to be adopted or published by the Tunisian presidency, as Essebsi and Nidaa Tunis have consistently opposed measures of transparency and truth seeking and will likely not endorse and legitimize the findings of the IVD, let alone hold anyone accountable. The report would not be classified, and members of civil society may attempt to publish it if government officials do not ratify or publish it themselves. Despite the continued trials at the specialized chambers, suspects remain free and protected. And most recently, on December 10—which the world marks as Human Rights Day­—Essebsi pardoned Borhen Bsaies, a prominent Nidaa Tunis figure and political adviser known for his staunch defense of Ben Ali’s regime even in its last hours. With this presidential pardon, Bsaies is now set to be free again after serving only two months of a two-year sentence related to corruption cases dating to Ben Ali’s era. In such a climate, and with limited resources and continuous political sabotage, the IVD is bound to achieve very little.

Regardless of the IVD’s work, the broader struggle for justice for victims of the former regime and those injured or killed in the revolution faces an uphill battle. Neither Nidaa Tunis nor Ennahda has shown that this struggle is a priority for them, and the two sheikhs seem willing to trade justice for power in both elections and governance.