What is the Public Prosecution?

An entity within the Egyptian judicial system that:

*The Code of Criminal Procedures dictates the circumstances during which pretrial detention can be ordered; maximum detention periods are also outlined. In addition to ordering pretrial detention, prosecutors have discretion to release individuals with or without bail. In recent years, however, some defendants have been kept in pretrial detention up to the maximum lengths allowable and even beyond them. The Court of Cassation states that “issuing remand detention orders is not an absolute right of the prosecutor,” but rather that doing so should be contingent on the presence of sufficient evidence to justify the decision.

** Travel bans can be issued by more than one authority, including the Public Prosecution. The law grants these authorities the power to issue three-year renewable bans. While the bans can be appealed in court, there is little legislation regulating the conditions and procedures around travel bans, save for a 2013 interior ministry decree.

Who is the Public Prosecutor?

The most senior figure in the Public Prosecution who serves for either a non-renewable four-year term or until retirement age, whichever comes first

How has the Public Prosecutor been appointed over the years?

To become a prosecutor, a candidate must:

Spotlight: What is the Supreme State Security Prosecution (SSSP)?

A branch of the prosecution established in 1953 by a Ministry of Justice decree. It has nationwide jurisdiction over many crimes, including:

Over the years, the jurisdiction of the SSSP has been expanded by new legislation and decrees citing counter-terrorism and security justifications.

What international standards govern the appointment, mandate, and role of prosecutors?

There are a number of international and regional standards governing the appointment, mandate, and role of the prosecution, including the UN Guidelines on the Role of Prosecutors, the Principles and Guidelines on the Right to a Fair Trial and Legal Assistance in Africa, and the IAP Standards of Professional Responsibility and Statement of the Essential Duties and Rights of Prosecutors.

Among the principles established by these standards: 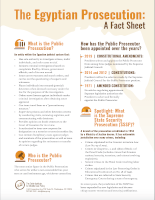