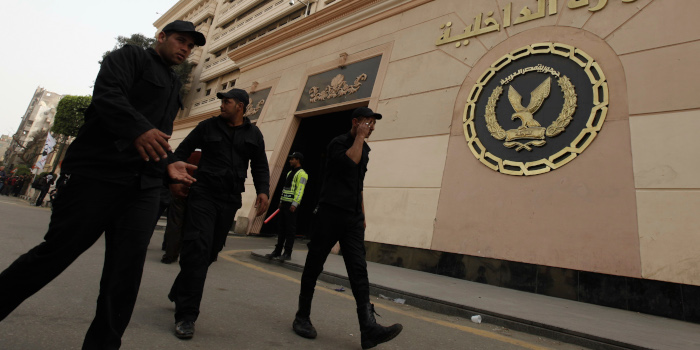 Riot police walk in front of the interior ministry headquarters in Cairo in 2013 (photo by Amr Abdallah Dalsh, via Reuters).

This week, officers went into the Dokki Police Station and threatened to send Egyptian activist and blogger Alaa Abdel Fattah back to jail if he did not stop talking about the conditions of his probation. At the end of last month, Alaa had been physically released from detention after serving a five-year sentence on charges involving a peaceful protest outside of the Shura Council in 2013. Although his release was widely celebrated, as part of his sentence he is obligated to fulfill a five-year probation period—a requirement that mandates his presence at the police station every day between 6 p.m. and 6 a.m. for the next five years. Though jarring, Alaa’s probation order is unfortunately not an aberration but the latest in a systematic trend that has observers wondering how and to what extent probation has become an additional form of punishment in today’s Egypt.

Egyptian prosecutorial and judicial authorities are frequently issuing conditional release orders and verdicts that incorporate non-custodial measures like probation, not instead of but in addition to time in detention. In September 2018, for example, 215 defendants in the Raba’a dispersal case—among them photojournalist Mahmoud Abu Zeid, also known as Shawkan—were sentenced to five years in prison and a five-year probation period. Those who have been released currently report to police stations daily from 6 p.m. to 6 a.m. in implementation of this mandated probation. Even those who have not received final sentences face the possibility of probation. In December 2018, journalist and blogger Wael Abbas was ordered conditionally released from pretrial detention in an ongoing case on probationary measures; since his release, he has had to check in at the police station twice a week for two hours each time.

For individuals at sentencing, Egyptian law establishes a number of types of probation. More broadly, however, Law No. 99 of 1945 lays out the legal scheme governing the practice as a whole. After an individual is sentenced to a probation period decided by the judge at sentencing, the law empowers the sentenced individual to designate a residence at which to serve his or her probation period. However, the law additionally authorizes authorities to select a location for probation if no residence is provided, as well as to determine whether or not a location selected by the defendant is appropriate for police surveillance. This discretion has been used to systematically erode the right of individuals to complete their probation periods at their stated residence—a right guaranteed to them under law—and instead force individuals who have residences where police surveillance can clearly occur to spend them at police stations. At most police stations, there is not a designated location for individuals serving probation; some are held together with other detainees, while others are locked in rooms by themselves—in effect a form of solitary confinement. Depending on the police officers on duty, individuals on probation are subject to systematic harassment such as being forced to clean bathrooms and do dishes. Serving probation periods in police stations makes it nearly impossible for individuals to travel within the country, creates serious impediments for those seeking employment or pursuing their education (particularly as some police stations prohibit the entry of books and laptops), and often means that defendants are regularly spending their nights attempting to sleep on the floor.

Articles 28 and 29 of the Egyptian Penal Code state that in cases involving felonies punishable by hard labor or detention that disrupt government security and other listed felonies including currency counterfeiting, theft, and murder, an individual can be sentenced to a probation period equal to his or her sentence, but no longer than five years. The provision gives the judge discretion to reduce or eliminate the probation period entirely. Various other laws, including the law governing prostitution, include provisions related to probation. While individuals who violate their probation are subject to a prison sentence of up to one year per Article 29 of the Penal Code, the law lays out no provisions governing police abuse involving probation conditions.

Responding to criticisms that prison schemes around the world are increasingly unable to achieve the essential objectives of imprisonment with regards to safety and rehabilitation, are violating the rights of defendants and their loved ones, and are constituting a heavy financial burden on the state, international standards increasingly regard imprisonment as a measure of last resort. Accordingly, non-custodial alternatives to imprisonment, including probation, are, when appropriate, encouraged. The United Nations Standard Minimum Rules for Non-Custodial Measures (Tokyo Rules) regulate probation. At the pretrial stage, Rule 6.2 states that “Alternatives to pretrial detention shall be employed at as early a stage as possible.” At sentencing, Rule 8.1 states that the judge making the decision on the form of custodial measure “should take into consideration…the rehabilitative needs of the offender, the protection of society, and the interests of the victim.” Stipulating the type of supervision involved in a non-custodial measure, Rules 10.1 and 10.4 establish that the purpose of supervision is to “reduce reoffending and to assist the offender’s integration into society in a way which minimizes the likelihood of a return to crime,” and suggest that offenders should be given psychological, social, and material assistance in order to strengthen links to the community and facilitate their reintegration. Rule 12.2 states: “The conditions to be observed shall be practical, precise and as few as possible, and be aimed at reducing the likelihood of an offender relapsing into criminal behavior and of increasing the offender’s chances of social integration, taking into account the needs of the victim.” More broadly, and per its constitutional and international legal obligations under instruments including the International Covenant on Civil and Political Rights and the African Charter on Human and Peoples’ Rights, Egypt is mandated to respect the dignity of those who are deprived of their liberty, to respect the right to freedom of movement of an individual, and to issue legislation and partake in practices that “reform and rehabilitate those who have been convicted, and…facilitate a decent life once [individuals] are released.”

In its current form, the Egyptian system of probation—whether at the pretrial or sentencing stage—gives authorities expansive discretion to decide on the terms of probation, raising questions on the space such a scheme leaves for politicization and the use of probation as an additional measure to silence and punish dissidents. At the pretrial stage, Egyptian authorities’ tendency to grant probationary measures only after an individual has already been held in pretrial detention for a lengthy period of time—nearly seven months in the case of Wael Abbas—violates the Tokyo Rules. Additionally, at sentencing, there is no indication that Egyptian judges are taking into account concerns of rehabilitation and reintegration, the protection of society, and the interests of the individual. Rather, a system which has resulted in individuals having to spend 12 hours every single day at a police station (referred to as “half-day imprisonment” by a local campaign) is one that deprives these individuals of a basic sense of dignity and threatens their psychological and mental health; that denies individuals the opportunity to find and maintain gainful full-time employment and allocate the time to rebuild their personal lives; and that contributes to a mounting sense of injustice, detracting significantly from the credibility and efficacy of the Egyptian system of justice and the access of its citizens to the rule of law.

Related Content
Who Is this COP for?  Analysis 11/10/2022
Inside Egypt’s Feminist Washing Analysis 09/26/2022
When Will the Climate Movement Take a Stand on Human Rights in Egypt? Analysis 09/13/2022
Politics, Society and Public Morals: How Does a “Debauchery” Charge Service All? Analysis 06/21/2022
Alarming Death of Egyptian Economist and Researcher Following Forced Disappearance Press 04/14/2022