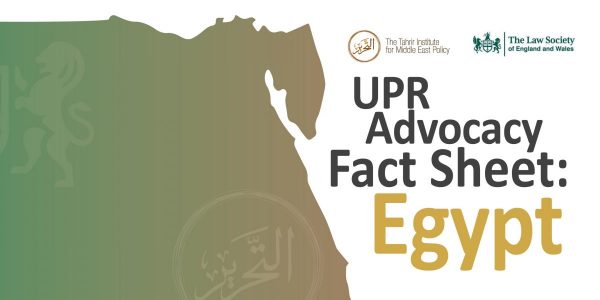 Ahead of Egypt’s Universal Periodic Review (UPR) pre-session, the Tahrir Institute for Middle East Policy (TIMEP) and the Law Society of England and Wales issued a UPR Advocacy Fact Sheet that complements the joint stakeholder report that the two organizations published in March 2019 per the UPR process.

The UPR is a mechanism of the United Nations created to examine the human rights performance of all U.N. member states; Egypt’s UPR is set to take place on November 13, 2019. Egypt’s UPR pre-session, which occurred on October 9, 2019, presented an opportunity for stakeholders to engage with states in conversations about Egypt’s human rights record in the lead-up to the UPR.

Much like the joint stakeholder report, the advocacy fact sheet traces the consolidation of authoritarian rule through legislation, as well as the crackdown on members of the legal profession and civil society. The fact sheet assesses Egypt’s failure to adhere to its commitments from the previous UPR cycle. It focuses specifically on:

Per the UPR process, the country being reviewed submits a national report and the Office of the U.N. High Commissioner for Human Rights puts together one report compiling all U.N. information—including reports by the special procedures and treaty bodies—on the country, as well as a second report compiling information received from stakeholders, including civil society.

Egypt underwent its first UPR cycle in February 2010 and its second cycle in November 2014. 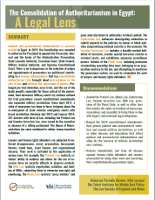