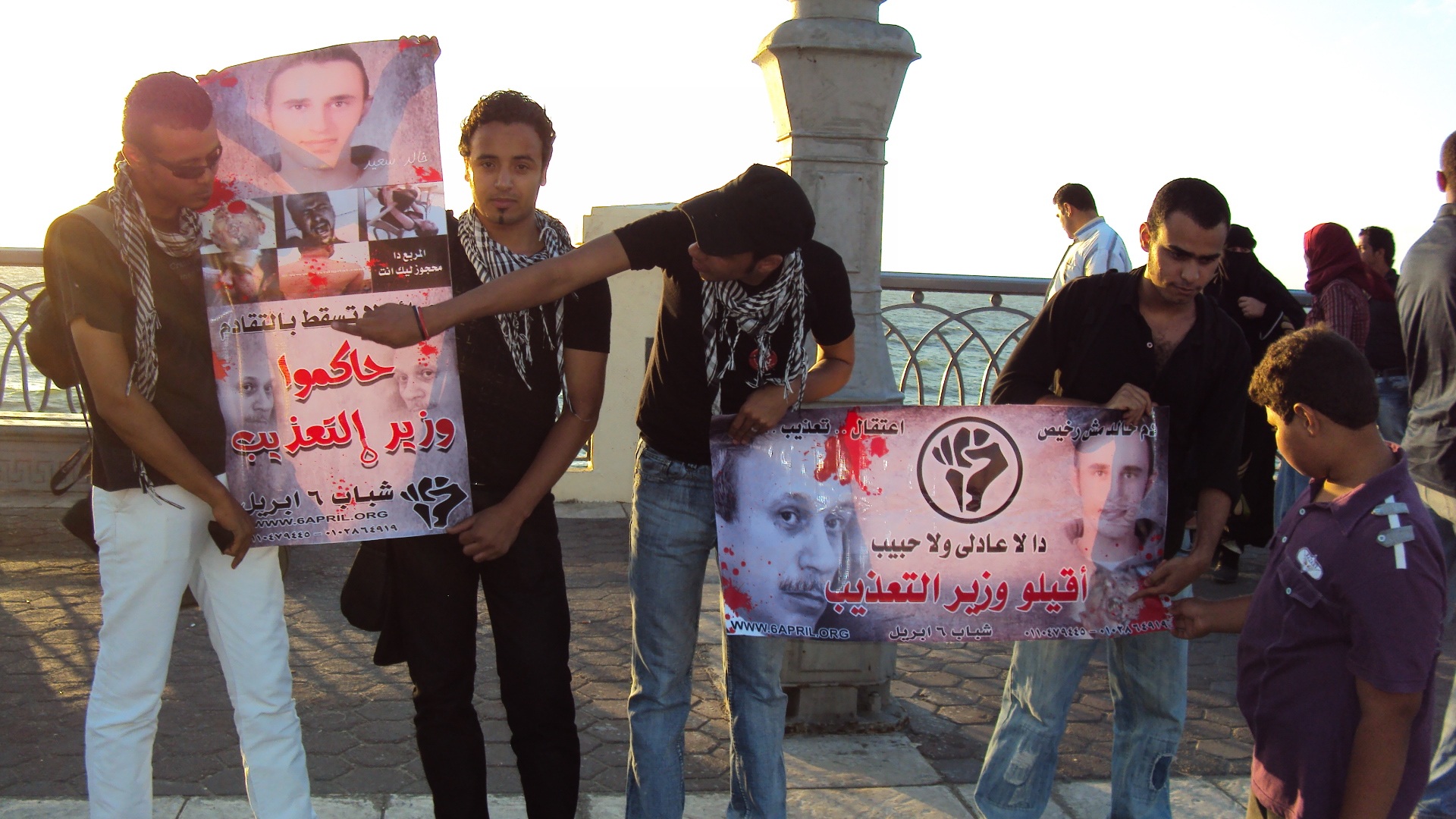 Demonstrators carry posters bearing the face of Khaled Said and calling for the trial of Mubarak-era Interior Minister Habib al-Adly. Said was beaten to death by policemen in 2010 (photo via Flickr user justicentric).

Cases of alleged torture are quite frequent in Egypt’s prisons and police stations. Documented reports describe brutal beatings, sexual abuse, electrocution, and hangings during prison time or pretrial detention periods. In 2014, multiple leaks of video footage provided further evidence of torture and sexual harassment of both male and female detainees, who were subjected to electric shocks, beating, hangings, and rape. Since then, cases continue to be reported regularly.

In July 2017, at least three instances were reported in which young men in police detention were later found dead, with their bodies showing signs of torture. Protests erupted on July 30 after police claimed that one of the young men had killed himself in custody. Yet, despite overwhelming evidence of these crimes repeatedly occurring, the Egyptian government has continued to insist that torture cases are isolated incidents and neither standard practice nor a systemic issue.

In September 2017, Human Rights Watch issued a much-publicized report on torture by Egyptian security forces. The Human Rights Committee in Egypt’s House of Representatives discussed the report but rejected its findings as contradictory and inaccurate.  The United Nations High Commissioner for Human Rights included torture on a list of issues of concern in a speech on Egypt ahead of the 2017 U.N. General Assembly, but the Egyptian delegation rejected the comments.

The use of torture is prohibited by the Egyptian Constitution, which clearly states in Article 52 that “torture in all forms and types is a crime with no statute of limitation.” Additionally, Egypt is bound as a signatory to international treaties that render torture a violation under international law, namely the Convention Against Torture and the International Covenant on Civil and Political Rights. Despite this, local and international NGOs have repeatedly documented and condemned the government’s use of torture and detainee mistreatment. El Nadeem Center for Rehabilitation of Victims of Violence and Torture tallied nearly 915 cases of torture and dozens of deaths from torture. It is also estimated that “hundreds” of Egyptians are held in secret military detention outside of judicial oversight, where they are subjected to beatings, electrocution, sexual assault (at times under the guise of “virginity testing”), and hanging by their limbs in facilities such as Azouli military prison in Ismailia. Such detentions are often justified by government officials under a policy of counter-terrorism, despite legal prohibition and widespread agreement on the inefficiency and danger of using torture in intelligence gathering.

Individual cases of torture can spark public demonstrations, public outcry, and reaction from the government. The death of Khaled Said while he was in police custody in 2010 was one of the flashpoints for the January 2011 protests, after images of his battered body spread throughout social media. In November 2015, protests followed the deaths of Talaat Shabeeb in Luxor and Afify Hosny in Ismailia, and the accused officers were transferred to other governorates. Forced to confront mounting anger over cases of torture, the Ministry of Interior characterized the incidents as “isolated” and denied that the ministry protects policemen who mistreat citizens. Six police officers were eventually sentenced to prison time in Shabeeb’s death after an autopsy confirmed that he was tortured; seven other police personnel were acquitted. The case of tortured and murdered Italian student Giulio Regeni in 2016 generated international outcry, with international scrutiny quickly placing the blame for Regeni’s brutal death on the shoulders of Egyptian security forces.

The Egyptian government occasionally makes concessions to appear sympathetic in regard to claims of torture. In October 2014, state-run news agency MENA announced that Egyptian police stations would include units responsible for monitoring human rights, and in May 2015, the Minister of Interior announced that his staff would be operating under more “humane” guidelines. During a visit to Egypt’s Police Academy in December 2015, however, Sisi denied that torture was a systematic problem in Egypt’s security services, fitting a pattern of denial from government officials. The Ministry of Interior described video footage of tortured prisoners as “acted out.” The head of the ministry’s public relations and media department was quoted in July 2014 as stating that torture claims are “fabrications,” commenting that Egyptian jails have become more like hotels. Similarly, the Ministry of Interior has denied torture allegations submitted by 16 local human rights organizations.

Though prosecutions of officials for torture are rare, they do occasionally occur. One deputy detective was sentenced to five years in prison for his role in torturing to death a prisoner being held at the Beheira police station in May 2015, while two other policemen were exonerated. Egypt’s highest court upheld sentences against 14 other policemen in 2015 for the torture of two prisoners in 2006 that led to their death. In the latter case, however, many considered the sentencing to be extremely lenient, with a three-year maximum prison sentence for the colonel who ordered the torture and one year each for the remaining 13 policemen.

Systematic torture and detainee mistreatment is one of the leading human rights setbacks in Egypt today, and victims range from prisoners in secret military detention facilities to international students. Official oversight bodies such as the General Directorate for Human Rights, part of the Ministry of Justice, and the Human Rights Directorate, part of the Ministry of Interior, have proven to lack the capability or interest for addressing the issue.

Additionally, despite efforts by civil society organizations to track and report torture cases, evidence is usually limited to victims’ testimonies and forensic reports, as organizations are rarely permitted to visit detainee facilities for inspection purposes, and security forces regularly pressure families of victims to accept fabricated forensics reports. Moreover, as part of a government crackdown on civil society, human rights and prisoners’ advocacy groups­—such as El Nadeem, whose offices were closed by the government in February—find increasing hostility even to day-to-day operations.

Any tangible change will require the government’s commitment to adhere to proper oversight of all prisons and police stations, as well as to conduct transparent investigations into torture allegations and to dispel the culture of impunity among officers by bringing perpetrators to justice. The Sisi administration, Egypt’s House of Representatives, and the international community must prioritize addressing torture as a cornerstone of its obligation to uphold the Constitution and as a necessity in its counter-terror strategy.

Writing that Egyptian authorities “are not only practicing the crime of torture, but also endorsing different ways to support torture and to spread it,” TIMEP Nonresident Fellow Sherif Azer analyzed recent cases of torture and impunity of police officers: How the Egyptian Government Endorses Torture

Magda Adly, a co-founder of El Nadeem, discussed the closure of the center and its implications for civil society human rights advocates, in an article published by TIMEP in February: Blocking the Defenders: Egypt’s Closure of El Nadeem

The closure of El Nadeem in the context of the government crackdown on civil society under President Abdel-Fattah El Sisi was discussed by Hussein Baoumi, former TIMEP-Atlas Corps Bassem Sabry Democracy Fellow: Bricks in the Wall: El Nadeem, the NGO Law, and Egypt’s Crackdown