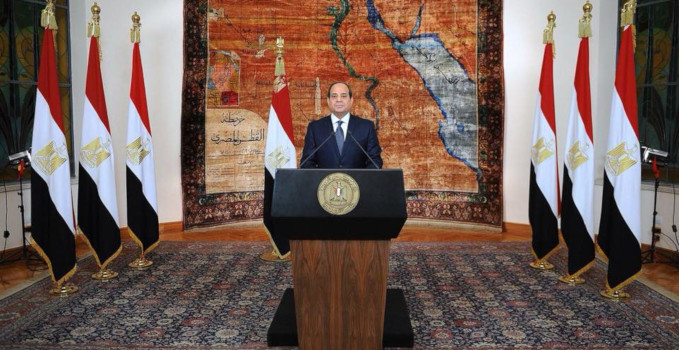 In one of the least surprising political developments in Egypt since 2013, President Abdel-Fattah El Sisi’s allies are moving to amend Egypt’s constitution so that he can continue to rule the country until 2034. Since deposing then-president Muhammad Morsi in 2013 and becoming president in 2014, Sisi and his allies have worked assiduously to consolidate his power over Egypt. These amendments—which both expand his control over state institutions and extend his rule so that he may remain president up to 20 years—are fully consistent with his efforts since the coup of 2013 and his rise to the presidency the following year. This latest effort to expand and entrench Sisi’s power will almost certainly succeed, but it does offer a rare opportunity for Egyptians to say no to Sisi’s political projects.

Shortly following the coup in July of 2013, Sisi forswore any political ambitions, stating he would not run for president. Less than a year later he was elected president with over 96% of the vote. Since formalizing his rule of Egypt, Sisi has expanded his power over state institutions through legislation and political appointments. A law signed by Sisi in 2017 gave Sisi new power to appoint judges to Egypt’s high courts, breaking with the tradition of selecting judges based on seniority. One newly proposed amendment would enshrine this presidential authority in the constitution, and the amendments would add the prosecutor-general to the list of appointments from the judicial branch that Sisi would now be able to make.

The amendments also move to dilute the already extremely weak parliament by adding an upper house, a third of whose members are to be appointed by the president. The fact that the parliament is the body that proposed this amendment reflects the degree to which it is already a tool of executive power rather than an independent branch of government. Even after Sisi ceases to rule Egypt, the constitution will still leave Egypt with an authoritarian president presiding over a series of weakened institutions.

The amendments also reveal part of the government’s likely public-relations strategy for selling the changes to domestic voters and foreign observers. Even among Sisi’s supporters, there are Egyptians uncomfortable with returning to a president-for-life system. The authors of the amendments sought to minimize this criticism by preserving the two-term limit, but changed the terms from four to six years, and invited the current president—Sisi—to restart his presidency and pursue two new, longer terms. In Egyptian media discussions, it has been suggested that this extension is due to exceptional circumstances, such as when Franklin Roosevelt was elected four times during World War II, and that Sisi’s successor would be bound by the two-term limit. This promise of term limits in the future is almost certainly as disingenuous as when Sisi promised not to run for president in 2013, or when in 2017 he said he opposed amending the constitution to extend his time in office. While the government would like this process to be seen as a lawful exercise in amending a constitution, Article 226 of the 2014 constitution expressly prohibits amending articles related to reelecting the president and other freedoms except to “bring more guarantees.”

An amendment calling for a quota of at least 25 percent of members of parliament to be women will also be deployed as a talking point by the government and its surrogates, especially when engaging with foreign governments and media. While an increase of women in leadership positions is essential, there remain two fundamental problems. First, despite a variety of experiments with quotas for women in parliament, women remain deeply underrepresented in leadership positions in the current House of Representatives and its committees despite their unprecedented numbers in the House. The second, more fundamental problem is that Egypt’s parliament is largely powerless and serves as a rubberstamp for Sisi. In the math of political calculus, 25 percent of zero political power is still zero. Giving women increased membership in a largely powerless body—one which would be further weakened with the new amendments—is meant to distract from the broader authoritarian consolidation these amendments effect. This is not to say that quotas shouldn’t be introduced but rather that they shouldn’t be allowed to serve the regime’s objective and distract observers from the regime’s ambitions of strengthening Sisi’s already extraordinary grip over the Egyptian state.

While there is little doubt that the amendments will clear the House with few edits—89 percent of legislation passed last session originated from bills submitted by the cabinet, with little public debate—the amendments must go to the Egyptian public in a referendum. In past votes, Egyptians were presented with the choice of voting for Sisi or a candidate with no hope of winning. In last year’s election, every serious candidate was imprisoned, harassed, or detained; with all candidates out of the race, the government registered Moussa Mostafa Moussa at the last minute to avoid the election becoming a referendum on Sisi’s presidency. Moussa, however, had been campaigning for Sisi until joining the race. And so voters were faced with the choice of voting for Sisi or a little-known politician who campaigned for Sisi. For the first time Egyptians will have the chance to vote “no” on Sisi’s continued rule. Unlike Sami Anan, who remains in prison, or Ahmed Shafik, who was placed in detention until he withdrew from the race, or Khaled Ali, whose campaign staff was harassed and who himself was prosecuted on trivial charges until he was forced to withdraw, the word “no” can neither be detained nor arrested. It cannot be intimidated into withdrawing from the ballot.

While there is no doubt that the amendments will be implemented regardless of public opinion,   the word “no” is a unique opportunity the opposition can use to organize a campaign that allows Egyptians to safely, anonymously voice their dissent, as they have already bravely begun to do. They do this despite the fact that intimidation and the targeting of opposition figures is already underway, as they were in the 2014 referendum.

“No” votes almost certainly will not affect the referendum’s outcome, but the chance for Egyptians to say “no” to their president carries some symbolic power by reminding Egyptians that they have a right to dissent, regardless of what the government claims or does. The initial reaction of opposition figures to choose to campaign for a “no” rather than boycott is a wise one. It will become obvious how much so when the government’s routine turnout gimmicks, such as threatening voters with fines as in years past, fail to make an appearance in the media discourse this time around. After years of austerity that has eroded public opinion of Sisi, the government must realize his popularity is in decline and the results of a truly fair up-or-down vote on his indefinite rule would be far from definite.

In the extremely unlikely event that the Union to Defend the Constitution and other groups succeed and mobilize a sizable “no” vote despite extraordinary levels of repression, the government may resort to ballot-stuffing or other manipulation. But even if that occurs, the upper echelons of government will know, and it may well affect Sisi’s credibility vis-a-vis other centers of power in the regime as he more visibly declines in popularity.