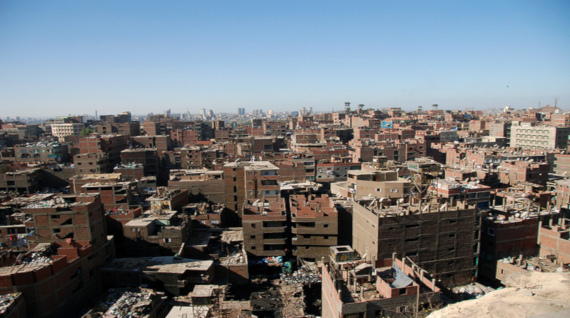 Established by presidential decree in late 2008, Egypt’s Informal Settlements Development Fund (ISDF) has come to the forefront in spearheading efforts to eliminate so-called “slums” or “informal settlements.” Since its creation in 2008, the ISDF has launched various projects to map out these areas, such as Duweiqa, and plan related intervention policies, dealing with residents and relocating them to other housing projects. By working with local authorities and the Ministry of Housing, the ISDF aims to “achieve social justice and ensure citizens’ rights to adequate, safe housing, and developing their economic status,” improving their economic situations in comparison to the areas where they previously lived.

Such interventions, however, had a detrimental effect on the social and economic conditions of people living in these unsafe areas. Most ISDF interventions were focused on Cairo, particularly in the districts of Downtown and Old Cairo. These interventions mainly end with the eviction of dwellers for the sake of land value and investors’ development plans, instead of effectively guaranteeing the rights of inhabitants and helping them maintain their work and livelihood.

The fund classified informal areas as either “unplanned areas” or “unsafe areas.” The latter are further categorized into four grades according to the severity and type of risk they pose to inhabitants, in light of surrounding conditions. These conditions include environmental and geological factors (Grade One); unsuitable shelters or areas unsuitable for building (Grade Two); areas exposed to industrial pollution, under high-voltage power cables, or lacking access to clean drinking water (Grade Three); and finally areas of unstable tenure that include houses developed on state land or on the territory of the Ministry of Religious Endowments (Grade Four).

The ISDF prioritizes life-threatening areas (Grade One), such as the Duweiqa informal settlement, over the other classified grades. In these cases, the priority is usually to move the residents to safe areas. Based on ISDF strategy, relocation decisions are limited to isolated instances. However, the priority is given to in situ development and keeping residents in their home areas. Under “relocating” mechanisms, the ISDF states that residents of informal areas have the right to safe housing and improved living conditions.

The specialized unit of the ISDF, embedded within the body of the governorate, communicates with the neighborhood administration to provide statistical survey on the specific area so it can be categorized through the ISDF’s classification. Each unit coordinates with neighborhood administration offices to identify types and grades of informal areas, which are usually categorized according to the percentage of buildings with unsafe standards. If over 50 percent of residential buildings in the area deemed to have unsafe conditions, it will be classified under Grade Two. For instance, in the Maspero Triangle Project—classified under Grade Two—most dwellers were forcibly evicted by the ISDF.

As documented by urban researcher Ahmed Zaazaa, between July 2014 and August 2015—the period when Laila Iskander served as minister of state for urban renewal and informal settlements—the ISDF was part of the then newly established ministry. Until Iskander’s dismissal and the merging of her portfolio back into the Ministry of Housing, the intervention strategy of the ISDF tended toward in situ development, notably in coordination with residents of the Maspero Triangle. After the 2015 cabinet shuffle that ended Iskander’s tenure, the Maspero development plan  largely turned into an investment-oriented plan in which residents as stakeholders lost their properties to investors planning to redevelop their land into commercial, recreational, and residential zones.

In light of this vision, the residents were given a choice: financial compensation, the opportunity to buy housing units in the new project funded by the private sector, or relocation to the al-Asmarat complex in Moqattam neighborhood, which has been recently developed by the state as part of its plan to “eradicate slums.”

The ISDF’s interventions in the Maspero Triangle, al-Mawardi, Arab al-Yasar, and other areas near Downtown and Old Cairo hammers home some crucial points. The ISDF’s classification puts these areas on the same level as other areas which have buildings made of makeshift materials such as tin or cardboard, such as Eshash al-Muhagirin in al-Marg. This classification is unjustified, especially since these areas lack infrastructure services, such as roads, garbage collection, sewage systems, and clean drinking water. Such services are actually available in many areas classified under Grade Two, under which residents have eventually faced permanent eviction.

Al-Mawardi and Tal al-Aqarib areas in Sayeda Zeinab district were within the same classification. Though the ISDF agreed to upgrade both areas, al-Mawardi’s inhabitants were permanently evicted so their land can be used to “revive historical and cultural characters of their neighborhood, also to restore its civilized look.” Reconstruction of Rawdat al-Sayeda, formerly known as Tal al-Aqarib, coincided with intense media coverage centered on the returning of the residents, contrary to the earlier case of al-Mawardi, signifying the lack of equally reporting the cases of forced eviction while they consist the main intervention in Egypt’s capital. In Arab al-Yasar, residents are waiting for eviction despite the archaeological nature of the site, which is also classified under Grade Two.

The common factor of these interventions is that these informal areas are located in key areas in Cairo, namely the Downtown and Old Cairo areas, which hold a great economic and touristic value for investors and the governorate. These areas have always been at the center of media and public attention, especially when it comes to their future and how they can be useful for profit. Meanwhile, the pace at which unsafe areas are dealt with has increased recently, as President Abdel-Fattah El Sisi pledged to eradicate slums by the end of this year. Residents of the affected areas were moved to new communities around the capital. 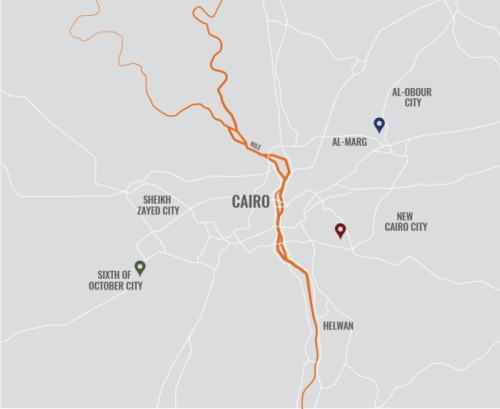 It is important to note that newly established communities, such as al-Asmarat complex (in red, located 18 kilometers away from Downtown), Masaken Othman (in green, located 45 kilometers away from Downtown), and al-Mahrousa Projects (in blue, located 30 kilometers away from Downtown) are financed by state institutions. These projects were arranged by state ministries, local authorities, the ISDF, and the Cairo governorate. The new complexes are home to those who were relocated from areas in the heart of the city that were designated as informal. The long distance from Cairo has made the daily life of residents in these new communities harder. They are prevented from resuming their professions, which they used to work in their previous neighborhoods. In addition, they risk being expelled from their new apartments if they are proven to be taking up commercial activities, or using their apartments in such activities. They are more distant from the commercial area in the center of Cairo, which consist their sole source of income. This, in turn, affects household annual income, as Zaazaa described in the Maspero Triangle intervention.

Residents of the new communities are also banned from setting up elementary markets. Therefore, they spend more money on transport when they head to find the nearest market, education institution, or health-care center. In addition, they also spend long hours stuck in traffic on intercity buses—not to mention the long distances and cost burden involved when moving between these communities and the city center. Also, governorate regulations require residents to pay 4,000 Egyptian pounds (LE) to take delivery of the unit and a monthly rent of LE300. Many protested, seeking to reduce the required amount and seeking permission to set up markets and businesses in these communities, after many encounters with officials, which eventually ended with residents’ arrest, reaching no conclusion of their situation and with additional burdens of incarceration and fines.

Apart from the cost burden on new residents of the communities, there is another concern arising over social security. Residents of informal areas are accommodated in groups; for instance, Tal al-Aqarib residents are residing in a single block in the new projects. Accordingly, these complexes are subdivided according to the areas of origin of new residents, which leaves residents feeling unsafe amid a lack of social programs to integrate them into these communities. This is also highlighted by requests for more security measures following disputes and violence among residents.

Residents who opt for financial compensation usually reinvest their money in areas close to Cairo, which are classified as informal areas, given that they are built on agricultural land. This was the case for nearly 80 percent of families in the Maspero Triangle, as discussed by Zaazaa in a phone interview. In the Maspero Triangle area and other cases, the ISDF did not provide data to show whether the solutions proven to improve the living conditions of residents after they were evicted from the various risks in areas classified under Grade Two or to evaluate the outcome of interventions in Grade One areas—which include environmental risks—or the Grade Three and Grade Four areas.

Official statements from the governorate show that the ISDF is working with other executive authorities on 112 unsafe areas housing almost four million residents across Cairo. It is estimated that there are 28 Grade Two areas. In light of the ISDF’s increasing interventions, there are valid reasons for concerns among residents and urban researchers. In addition, the urban policies place a question mark over various issues. The current head of the ISDF is Mustafa Madbouli, who is also the country’s prime minister, minister of housing and the ex-head of the New Urban Communities Authority (NUCA). NUCA operates outside Cairo and aims to ease congestion in main cities by setting up new urban communities, such as Sixth of October City, al-Salam City, and others. NUCA was also mandated last June by the cabinet to upgrade al-Warraq island, which will be developed under public-private partnerships. The island was neither categorized under Grade Two nor any other grade of unsafe or informal areas. The common factor between this island and other areas is the investment value of the area.

The current situation rings alarm bells that the ISDF’s role is shifting from the development of areas most in need, to cooperating with authorities in Cairo to evacuate many areas to put investment plans into effect. According to the executive manager of the ISDF, the fund currently aims to relocate more residents from areas designated “informal.” This statement highlights trends within the ISDF and other cooperating bodies policies that do not involve residents in the future solutions to upgrade those areas or the areas to which they were relocated or ensure the delivery of key objectives designated by the ISDF itself regarding residents. It shows priority of the ISDF current strategy to evict then rely on assumptions—yet to prove to be true—that the residents’ living conditions will improve within five years, instead of concrete statistics on the progress of the ISDF’s interventions. These policies should at least work on a rights-based and sustainability perspective, as these new communities do not offer safe housing or potential improvement in living conditions. The ISDF and other authorities in charge of relocations do not pay much attention to residents after displacement or eviction. Therefore, the ISDF’s role in the development of unsafe or informal areas is debatable, as it rather seems to aim at organized eviction of residents from targeted areas.

These interventions are curated within the ISDF discourse aimed to address international institutions, which claims to eliminate unsafe areas through community participatory models—the focus of international centers and donor organizations. The ISDF is hardly committed to this dialogue in a city that accounts for a large share in its budget. Residents of areas under ISDF’s future plans are waiting to know how the ISDF can improve their living conditions of convenient and safe housing. Urban researchers and experts are seeking a definite mechanism that allows them to review the ISDF’s strategy versus actual outcomes on the ground and reports provided to international organizations about its efforts to counter informal areas.