Background: Egypt’s Bankruptcy Law (Law No. 11 of 2018) was issued as part of a series of economic reform laws that collectively seek to implement the reform program agreed upon under the Extended Arrangement with the International Monetary Fund (IMF), under which Egypt received a $12 billion loan; however, the Bankruptcy Law was not a specific stipulation of the loan agreement. The cabinet approved the draft law in January 2017 and subsequently sent it to the House of Representatives; the legislature approved the draft law in January 2018. The Bankruptcy Law ultimately went into effect after it was ratified by President Abdel-Fattah El Sisi when it was published in the February 19, 2018 edition of the Official Gazette.

Summary: The Bankruptcy Law eliminates prison sentences for individuals who declare bankruptcy, except in cases of fraudulent behavior, though it increases the penalties for those individuals convicted of bankruptcy fraud. The law also creates mechanisms that decrease the need for individuals and companies to resort to the court system in cases of bankruptcy. The law regulates the financial and administrative restructuring of troubled or stalled projects in an attempt to remove them from faltering and put them back into the market. Per the law, project restructuring plans must be completed within 60 days of filing and judges are given the discretion to extend that deadline. The Bankruptcy Law also reduces the liquidation timeline for businesses from about two years to nine months.

Legal Context: This law is Egypt’s first bankruptcy law. Prior to the law’s ratification, bankruptcy cases were dealt with on a case-by-case basis. The law is one of multiple economic laws passed in accordance with the implementation of the conditions for the IMF loan to Egypt. It was approved after the Value-Added Tax (VAT) Law and Investment Law, which both included significant economic reforms and liberalization endeavors. The Bankruptcy Law eliminates some components of the Trade Law, which established an extensive bureaucratic network for bankruptcy courts that hampered the process.

Political Context: The $12 billion IMF agreement stipulated a range of economic reforms focused on reducing the government deficit and developing the private sector. The agreement resulted in multiple pieces of legislation, including the Bankruptcy Law, aimed at improving the business environment in the hopes of attracting foreign investment. Although the Bankruptcy Law alleviates one of Egypt’s main demerits in the World Bank’s Ease of Doing Business survey, improving its ranking for the 2019 edition, the country continues to which cites issues such as starting a business, paying taxes, and getting credit among other financial topics.

Adherence to Legal Norms: Article 27 of the Egyptian Constitution reads, “The economic system aims at achieving prosperity in the country through sustainable development and social justice to guarantee an increase in the real growth rate of the national economy, raising the standard of living, increasing job opportunities, reducing unemployment rates, and eliminating poverty.” It further commits the Egyptian government to a number of economic priorities including supporting competitiveness, encouraging investment, taking into account the financial and commercial balance, and achieving a balance between the interests of different parties to maintain the rights of workers and protect consumers. The country’s Bankruptcy Law seeks to liberalize and reinvigorate the economy in accordance with this constitutional provision. However, the law complicates the process for terminated employees to obtain outstanding compensation, as it permits employers to withhold compensation following a declaration of bankruptcy; this directly contradicts the Labor Law which guarantees employees the right to demand compensation. There have yet to be any legal challenges regarding this portion of the law.

Implementation: The Bankruptcy Law’s effect on investment and the economy as a whole has not yet been fully documented. However, the law, in concert with other economic reforms and laws, is expected to positively influence the ease of doing business in Egypt and therefore increase foreign and domestic investment. The Egyptian judiciary has already attempted to restructure its economic courts to suit the law, as the minister of justice announced the appointment of structuring experts to economic courts in March 2019 specifically tasked with managing cases under the Bankruptcy Law.

Text: The full text of the law in Arabic is available here. 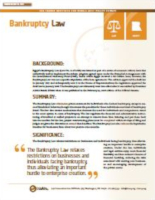