The reasoning of the court sent to acquitted defendants of Case 173 (photo by Nancy Okail, via @nancygeo on Twitter).

Summary: On December 20, 2018, the defendants in Case 173, popularly known as Egypt’s foreign funding case, were acquitted in a widely anticipated retrial. The case dates to 2011, when security personnel raided the headquarters of multiple foreign nongovernmental organizations (NGOs). Following prosecution in June 2013, 43 Egyptian and non-Egyptian civil society workers, including 16 Americans, were sentenced to between one and five years in prison on charges of illegally receiving foreign funds and operating without a license. After considerable international controversy and degradation of bilateral relations over the case, in April 2018 the Court of Cassation granted a retrial; in December 2018 all were acquitted. The December 2018 verdict and the court’s reasoning in the case have significant implications for other civil society workers—this time, members of domestic civil society organizations—who have been brought in for questioning, had their assets frozen, and had their names added to travel ban lists in what is commonly referred to as the second phase of the same case, which began in February 2016.

Political Context: NGOs in Egypt continue to face constraints amid a shrinking civic space. Egyptian authorities have infringed on the right to associate by passing legislation and imposing practical obstacles that severely erode rights inherent to the work of civil society. Some of these obstacles include preventing NGOs from registering as recognized entities, suspending organizations’ operations, refusing to grant licenses for regular activities, and closing offices. The government has harassed and intimidated individual civil society workers by arresting them, freezing their assets, and banning them from travel. As recently as November 2018, at least one NGO suspended its operations in the wake of an arrest raid that targeted activists and lawyers affiliated with the organization.

The climate for civil society in Egypt has drawn international condemnation, as the United States previously withheld international aid from Egypt, specifically in part because of Case 173 and concerns about a new, restrictive law governing NGOs. The most recent appropriations bill passed by the U.S. Congress in February 2019 includes $1.3 billion in military financing, with $300 million conditioned under human rights stipulations, including “the ability of civil society organizations… to function without interference.” The appropriations also included $112.5 million in economic aid, of which the secretary of state is authorized to withhold an amount up to the entire economic aid package without congressional approval in order to pay the legal fees for defendants in Case 173. Similarly, the European Parliament adopted a nonbinding resolution in December 2018 condemning recent human rights violations in Egypt and calling upon European countries to halt exports of security equipment to Egypt until the parliament’s human rights concerns are addressed, including issues related to Case 173 and reprisals against civil society members.

Legal Context: The December 2018 verdict in Case 173, which fully acquits all defendants of the charges of operating without a license and illegally receiving foreign funding, carries many significant legal implications. The court’s reasoning, released in February 2019, briefly begins by discussing the charge initially levied against the defendants of operating without a license. It lays out the steps taken by the NGOs in question and their representatives to register per the law, and explains that so long as there are no objections from authorities within 60 days of when the paperwork of an NGO’s registration is first submitted, “the founding of the NGO has been approved” in the eyes of the law. The reasoning additionally notes that the NGOs in question were clearly functioning in the country with the knowledge of authorities, evidenced by, among other things, the participation of some of the NGOs and their representatives as election monitors.

As to the charge that defendants had allegedly been illegally receiving foreign funds, the court’s reasoning clearly states that “foreign funding is not a criminal act per the law.” It goes on to explain that treating such funding as a crime makes it seem “akin to espionage, smuggling, and other sensationalist descriptions intended to agitate public opinion.” The reasoning alludes to the fact that much of foreign funding is intended to strengthen relationships between nations and peoples and mentions that many public activities—whether undertaken by the government or civil society—are actually foreign funded, and iterates that “the Egyptian state, with all of its apparatuses and institutions” is itself a recipient of foreign funds via a variety of means from different countries.

NGOs in Egypt today are governed by a wide range of laws and decrees, including various provisions of the penal code—one article of which was amended in September 2014 to expand the criminalization of foreign funding—and Law No. 70 of 2017, the country’s current NGO Law. The law, which was ratified by President Abdel-Fattah El Sisi in April 2017 to replace Law No. 84 of 2002, ratified by then-president Hosni Mubarak, introduces restrictive regulations on registration, funding, and activities; expands government and security sector oversight over NGOs; and imposes penalties of up to five years in prison for violators. Implementing regulations for the law have not yet been issued and following comments by Sisi, the government has begun an amendment process.

Trend Analysis: While positive because it ushers in an unequivocal acquittal for the original defendants of the case and serves as a welcome step toward recognizing the legality of civil society work in the country, the resolution of the first phase of Case 173 does not necessarily indicate an overall easing of restrictions or a deescalation of the crackdown on civil society in Egypt. It is noteworthy that both the resolution of this phase of the case and the reexamination of the NGO Law have been key sticking points in U.S.-Egyptian relations. Further reforms would be needed to signal institutional and authentic improvements in the respect for freedom of association and to bring Egypt into adherence with its own constitutional and international legal obligations.

Implications: The court’s reasoning in Case 173 is narrow, as it does not obligate a constitutional review of any of the relevant penal code and NGO law provisions in question. At the same time however, the court’s unequivocal language on both the recognition of NGO registration paperwork and the legality of receiving foreign funding provides a clear basis upon which those who continue to face prosecution under the same case in its second phase can, in a compelling manner and while citing the court’s reasoning, legally challenge the freezing of their assets, the listing of their names on the travel ban list, and the bringing of such charges against them. 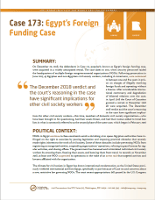