The sealed door to the Cairo office of El Nadeem Center for Rehabilitation of Victims of Violence and Torture after the office was closed in February 2017 (photo via El Nadeem Facebook page).

Despite freedom of association being one of the rights ostensibly protected under the Egyptian Constitution, the Egyptian government continues to tighten restrictions on NGOs and other civil society actors, many of which are forced to operate without official recognition because of prohibitive obstacles to formal association. Activists and NGO employees have been arrested and banned from travel, and had their assets frozen, with a particular escalation since early 2016; despite condemnation by international and domestic rights groups, these actions continue, and many may face harsh sentences under Egyptian law. In November 2016, the Egyptian House of Representatives quickly passed a restrictive new NGO law without consultation from civil society and bypassing the Ministry of Social Solidarity, despite six political parties and 22 NGOs issuing a joint statement denouncing it. Sisi ratified the NGO Law in May 2017, though he acknowledged calls for amendments to the law in November 2018 and requested that a committee be formed to study possible alterations to the law. Government investigations into civil society continue, as six civil society workers have been interrogated in 2018 in relation to Case 173. At least 37 organizations have been implicated in the case.

Freedom of association is a right codified in the 2014 Egyptian Constitution. According to Article 75, “all citizens shall have the right to form nongovernmental associations and foundations, which shall acquire legal personality upon notification.” Furthermore, Egypt is a signatory of the International Covenant on Civil and Political Rights, which upholds in Article 22 that “everyone shall have the right to freedom of association with others …”

Under former president Hosni Mubarak, freedom of association was restricted and NGOs were heavily regulated. Under Law No. 84 of 2002, NGO registration, funding, and membership were monitored by the Ministry of Social Affairs. The law also set prison sentences for violating its articles. However, under Mubarak, some NGOs circumvented the law by registering as law firms or limited liability companies, and the government tolerated their presence. The government maintained legal mechanisms that it used to crack down on NGOs when it desired, but civil society was permitted wider freedom to operate in the later years of Mubarak’s presidency.

The state’s attitude toward civil society survived the revolution, although civil society experienced massive growth and enjoyed more freedom than ever, in terms of content, membership, funding, and diversity. In 2011, the arrest and prosecution of 43 NGO international workers on charges of illegal foreign funding grabbed international headlines. A court ordered the closure of several international organizations and handed sentences to defendants for operating illegally in Egypt, but the government allowed non-Egyptians to return to their home countries. Civil society continued operating in a gray legal zone through 2013 and early 2014.

In July 2014, the Ministry of Social Solidarity released a draft bill for regulating NGOs. Shortly thereafter, the Ministry placed an advertisement in state newspaper al-Ahram giving notice that all local and international NGOs would have until September 2 to register under Law No. 84 of 2002 (though the deadline was later extended to November 10, then ignored by the government). Several local and international organizations voiced their rejection of the draft NGO Law.

In September 2016, a court ordered the assets of several leading rights activists frozen. Some of the activists targeted in the freeze were Hossam Bahgat of the Egyptian Initiative for Personal Rights, Gamal Eid of the Arabic Network for Human Rights Information (ANHRI), Bahey el-Din Hassan of the Cairo Institute for Human Rights Studies, Mostafa al-Hassan of the Hisham Mubarak Law Center, and Abdel Hafez Tayel of the Egyptian Center for the Right to Education. The freeze is part of Case 173, which includes several activists from a number of organizations, charged with receiving foreign funding to harm national security and operating NGOs without proper authorization.

NGO workers have also been subject to travel bans designed to prevent them from speaking on the human rights situation in Egypt outside the country. Hossam Bahgat and Gamal Eid have also been subject to these travel bans, as well as Esraa Abdel Fattah of the Egyptian Democracy Academy, Mohamed Lotfy of the Egyptian Commission for Rights and Freedoms, Mozn Hassan of Nazra for Feminist Studies, Nasser Amin of the Arab Center for the Independence of the Judiciary and Legal Profession, and Suzanne Fayyad and Aida Seif al-Dawla, cofounders of El Nadeem Center for Rehabilitation of Victims of Violence and Torture. In several of these instances, security officers failed to give a specific reason for the ban of travel, and those who have been banned are often not aware until they are at the airport.

Other workers have been harassed or detained by security forces. Ahmed Raghab of the Hisham Mubarak Law Center was harassed for supposedly accepting “outside money.” He was detained and questioned before finally being released on bail in June 2017. Azza Soliman of the Center for Egyptian Women’s Legal Assistance was also detained, questioned, and released on bail in December 2016. Mohamed Zaree of the Cairo Institute for Human Rights Studies experienced the same in May 2017. Interactions with Egypt’s police forces have become a regular occurrence for representatives of civil society. In the most recent examples, reports estimate that at least 19 activists and as many as 31 were arrested by security forces in November 2018. The Egyptian Coordination for Rights and Freedoms, in response to the arrests and coupled with the ongoing forced disappearance of its director, Ezzat Ghoneim, announced it would suspend operations in protest of the national environment for civil society organizations.

In May 2017, Sisi approved an even more restrictive version of the 2002 law regulating NGOs. The House of Representatives had originally bypassed the Ministry of Social Solidarity and passed the bill in November 2016 after only weeks of review. The NGO Law introduces more restrictive regulations on registration, funding, and activities, as well as further government oversight and penalties of up to five years in prison for violators. Furthermore, Sisi amendedArticle 78 in the Penal Code to include harsher punishments for receiving unauthorized foreign funding. The amendment applies to a variety of civil society cases, including that of Azza Soliman and journalist Hesham Gaafar. The law has been condemned by Human Rights Watch as “abusive.” At a conference in November 2018, Sisi announced his intention to study potential amendments to the NGO Law. A cabinet subcommittee consisting of officials from the Ministries of Justice, Foreign Affairs, and Social Solidarity was formed to discuss potential amendments, though it is unclear what the time frame for any legislation will be.

The closure of El Nadeem encapsulates the current struggle facing NGOs in Egypt. In February 2016, the Health Ministry ordered the center’s closure and a security task force was deployed to shut the center down. The justification for the attempted closure was that the center had shifted from operating as a medical facility to one that focuses on human rights promotion as well, thereby overstepping its mandate. Despite this attempt, the center’s staff continued to operate. A year later, in February 2017, employees arrived at the center to find that police had sealed off their offices with wax. The center has since ceased its operations, and its experience with harassment by the Egyptian security apparatus is characteristic of the current atmosphere for NGO workers in the country.

The Egyptian government’s actions restricting NGOs have drawn sharp rebuke from foreign governments. Recently, the European Union condemned the 2016 asset freezes of activists and organizations, arguing that such actions violate Egypt’s international rights obligations. In March 2016, U.S. Secretary of State John Kerry expressed concern about the renewed NGO case, noting that it “comes against a wider backdrop of arrests and intimidation of the political opposition, journalists, activists, and others.” After the most recent law was approved in May 2017, U.S. Senators John McCain and Lindsey Graham issued a joint statement that referred to the law as “the latest sign of a growing crackdown on human rights and peaceful dissent in Egypt.” U.S. Senator Marco Rubio stated that the law would have a “terrible impact” on Egypt’s capacity to reform. U.S. Representative Nancy Pelosi drafted a letter to Egyptian Speaker of the House Ali Abdel ‘Al calling for him to condemn the ongoing “assault on civil liberties.” The E.U. issued a similar statement condemning the law. In August 2017, the United States cited the NGO Law as a reason for withholding $195 million and cutting an additional $100 million in aid to Egypt.

In April 2018, the Egyptian Court of Cassation annulled the sentences of 16 defendants in Case 173 of 2011. A retrial was ordered, and because of a 2017 legal amendment, the defendants will not have the right to appoint lawyers to represent them. Still, lawyer Mohamed Borai suggested that “there should be a legal stipulation that obliges the Justice Ministry to compensate defendants for incorrect sentences.” Despite the annulment of sentences for 16 of the defendants, prominent NGO workers and individuals involved in Case 173 continue to face scrutiny and legal consequences. In 2018 alone, six civil society workers were summoned for interrogation by the judge presiding over the NGO trial, including El Nadeem cofounders Magda Adly and Suzanne Fayyad, Rawda Ahmed of ANHRI, Nazra for Feminist Studies Chairwoman Mozn Hassan, lawyer Amr Imam, and activist Esraa Abdel Fattah; all but Imam were required to pay bail in order to secure release following their interrogations. The judiciary has used alternative measures to suppress NGOs, evident by the courts permitting over 500 websites, including that of Mada Masr, to be blocked in Egypt.

The persistent antagonism toward civil society, despite changes in political leadership, reflects the state’s endemic view of civil society actors as threats to its power, rather than as partners in governance. This trend continues today with the revival of the NGO foreign funding case and the 2017 NGO Law: rather than establish new paradigms for state-society relations, these developments exemplify and codify the state’s usual behavior of harassment and control over public space.

Despite international attention and condemnation of practices such as asset freezes and travel bans, it seems unlikely that the state will change course in the near future, as evidenced by the NGO Law and the continued actions taken against human rights defenders. While the U.S. government has particularly taken umbrage at the sentences levied against American citizens as part of Case 173, the reopening of a portion of this case may give the illusion of progress in bilateral relations, while providing only a veneer to the ongoing suffocation and repression of domestic civil society. 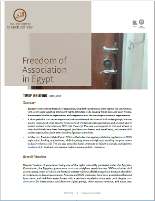