Summary: In August 2018, the United States Department of State released $195 million in fiscal year 2016 military assistance to Egypt. The sum had been withheld in August 2017 on the basis of Egypt’s law on nongovernmental organizations, relations with North Korea, and the unresolved 2012–13 NGO trial, with release of the funds contingent upon Egypt’s progress on each.

Process: The $195 million corresponds with 15 percent of the $1.3 billion in military assistance allocated to Egypt in FY16 that Congress automatically withheld pending the secretary of state’s certification of Egypt’s compliance with democracy and human rights conditions. According to the FY16 appropriations act, in the event that the secretary of state does not certify, he is permitted to exercise a national security waiver for the fund’s release. Although the Trump administration exercised this waiver, it continued to hold the funds until August 2018 on the basis of its own conditions.

Implications: At the time of the release, Egypt had made little to no progress:

Analysis: The release of the $195 million in FY16 military assistance indicates a change from former secretary of state Rex Tillerson to the current secretary, Mike Pompeo. Under Tillerson, North Korea was a particularly hot-button issue, with the U.S. taking a staunch position against those countries maintaining bilateral relations with North Korea. This has since changed, with the U.S. and North Korea signing an agreement in June 2017. Egypt’s NGO law was similarly a high priority for Tillerson, but democracy and human rights issues under Pompeo have also taken a back seat. Even if Pompeo had chosen to follow up on the NGO law, the U.S. remains bound by regional dynamics. Amid wars in Yemen and Syria and a widening rift in the Gulf, Egypt continues to pursue a noncommittal foreign policy, marked by the absence of loyalty to any one power—an asset within an increasingly destabilizing region.

The release also coincided with the presence of an Egyptian “white paper” military delegation of security and defense officials in Washington. The group’s primary aims were to secure the release of withheld military aid, address the severity of Egypt’s war on terror and showcase the government’s successes, and push for the reinstatement of aid policies ended by the Obama administration, such as cash-flow financing, which allows the Egyptian military to buy equipment on credit.

The U.S. has released these funds in the wake of the Egyptian government’s escalating crackdown on human rights and civil society, as evidenced by a series of recent arrests targeting a wide range of secular civil society actors on charges of disrupting national security and having affiliation with terror groups. With the crackdown already intensifying prior to the funds’ release, it is unlikely that the U.S. will see much progress on the conditions that the former secretary set in August 2017, or effectively exercise leverage over the Egyptian government for its continued and increasingly repressive measures. 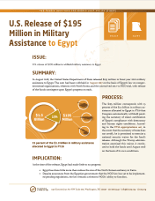