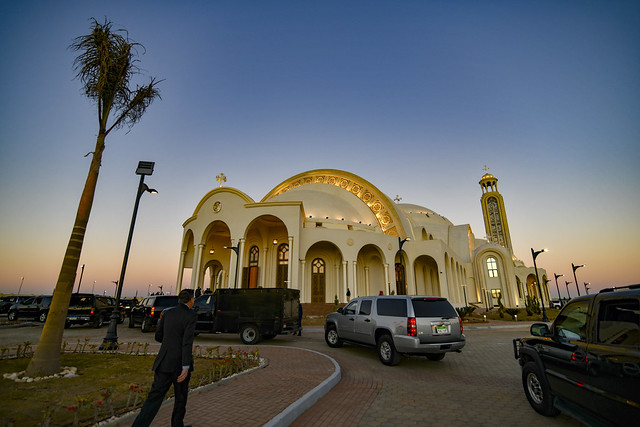 Secretary Pompeo visits the Cathedral of the Nativity in Cairo, Egypt (Photo via Flickr user U.S. Department of State).

Background: Egypt’s Church Construction Law (Law No. 80 of 2016) was approved by the House of Representatives on August 30, 2016, in implementation of Article 235 of the 2014 Egyptian Constitution. That article required the House, in its first term after the Constitution came into force, to issue a law organizing the building and renovation of churches. When the law was being discussed, however, it was rushed through the parliamentary process with little input from those it would actually impact. The law went into effect after President Abdel-Fattah El Sisi ratified it and it was published in the Official Gazette edition dated September 28, 2016. Although the Egyptian government celebrates the law as a beacon of inclusivity for the Christian community, the law furthers discrimination by subjecting Christians to a separate and unequal legal system.

Summary: The Church Construction Law creates a formal process for Christian denominations to submit a request for the “building, expanding, enhancement, reinforcement, destruction, or external detailing of a church, church annex, services building, or retreat house.” A legal representative of the church must submit a request, along with the appropriate permits and documentation, to the relevant provincial governor. The governor must approve or deny the request within four months and must provide a “justified” explanation if the request is denied; when deciding whether or not to approve the request, the governor may consider the “number and need of the citizens of the Christian denomination.” The law fails to address what recourse is available for communities that do not receive responses to their requests within four months, whether a failure to respond within the deadline constitutes tacit approval of the application, and what recourse is available for communities whose application is ultimately denied.

The law also creates a ministerial committee to review applications for churches that were built without presidential or gubernatorial permission before the law was ratified, but it does not set a deadline for when this process must be complete.

Significance: The passage of Egypt’s Church Construction Law codifies the church construction process into a single law and hands local authorities the power to grant approval for church construction, rather than the president as previously required. Although this law ushers in improvements to the legal system implicating church construction, the language of the law is vague, leaving it exposed to potential issues in its implementation. For example, the article allowing the governor to consider the number and need of citizens when deciding whether or not to approve a construction request—when Egypt has not conducted any recent census—subjects the process to discretion. Ultimately, the law entrenches an approval system that is long, bureaucratic, and subject to discrimination and lack of standardization.

Legal Context: Prior to the passage of the Church Construction Law, many civil society organizations advocated for a unified houses of worship law that would govern both churches and mosques; however, these demands were largely marginalized.

Also prior to the passage of the law, the construction of churches had been governed by the Hamayouni Law, which required that the president (and previously the king and sultan) approve the construction of every new church. Churches also had to comply with ten requirements set out in the Azabi Decree of 1934. For example, the new church had to be located a specific distance away from the closest mosque, and local Muslims also had to approve the church if the neighborhood was predominantly Muslim.

There is currently no analogous law to the Church Construction Law for mosques; instead the Ministry of Religious Endowments, or Awqaf, permits the construction of mosques based on compliance with building codes. This is in contrast to churches, which are—as described above—subject to numerous additional requirements and conditions.

Political Context:  The Egyptian Christian community, and specifically the Coptic community, has and continues to face violence and discrimination in Egypt. Sisi has presented himself as an ally of the Christian community, making public visits to Christmas mass and building the Cathedral of the Nativity, the largest cathedral located in the Middle East in the New Administrative Capital east of Cairo—an area that is not yet populated. The cathedral sits largely unused, however, while Copts in rural areas of Egypt have to travel long distances to pray due to the lack of churches close to them. Despite reports that all of the churches destroyed in August 2013 violence have been reconstructed, since the Church Construction Law’s passage and as of April 2018, the Egyptian Initiative for Personal Rights documented 32 instances of sectarian violence associated with the practice of Christian religious rites. These incidents resulted in the permanent closure of 22 existing churches, and the halting of construction of two new churches. Despite continued sectarian violence and systematic discrimination against Christians in Egypt, the government continues to do little to remedy these violations and respond to the root causes of sectarianism.

Adherence to Legal Norms: Under its domestic, regional, and international legal obligations, Egypt is mandated to treat its citizens equally, to protect its citizens from discrimination, and to protect freedom of religion and belief. Article 53 of the constitution declares that all citizens are equal, and may not be discriminated against due to religion; Article 64 iterates that “freedom of belief is absolute” and establishes places of worship as a “right organized by law” for the “revealed religions.” Article 18 of the International Covenant on Civil and Political Rights, to which Egypt is a party, asserts that everyone has the right to freedom of religion and the right to publicly manifest this belief. Egypt is also a party to the African Charter on Human and Peoples’ Rights, which states in Article 8 that “free practice of religion shall be guaranteed” and that no one must submit to “measures restricting the exercise of these freedoms.” Egypt’s Church Construction Law, which creates a distinct and unequal legal scheme for Christians seeking to renovate and construct houses of worship and which subjects worshippers to a lengthy and non-standard process, exists in violation of these obligations.

Implementation: The slow implementation of the law has given light to initial criticisms of its inability to make lasting change for Egypt’s Christian populations. The Official Gazette has not published any official decisions on the construction of new churches in Egypt, despite the fact that legal representatives of the Coptic Orthodox Church have applied for the establishment of churches in areas where Christians live that lack churches. In new cities, state institutions have granted oral approvals for the construction of churches following the allocation of land by the Ministry of Housing, which is how the Cathedral of the Nativity, inaugurated in January 2019, was built in the new administrative capital. According to the Cabinet of Minister’s Media Center, the government has issued 14 land allocations since 2018.

The U.S. State Department’s International Religious Freedom Report for 2018 indicated that there were 5,415 applications for existing churches to receive official status, yet the Church Regularization Committee issued eight decrees legalizing only 1,021 units, including 593 churches, 398 religious buildings and 30 other buildings. The Project for Middle East Democracy has stated that the approval rate under this new law is actually lower than the approval rate under Mubarak, when the law was not even in place. 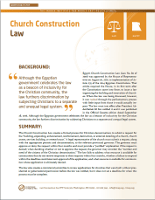