Background: The Law Governing the Pursuit of Civil Work (commonly known as the NGO Law), Law No. 149 of 2019, went into effect after President Abdel-Fattah El Sisi ratified the law and it was published in the edition of the Official Gazette dated August 19, 2019.

In November 2018, and in the wake of widespread criticism of the previous NGO Law (Law No. 70 of 2017), President Abdel-Fattah El Sisi made comments at the World Youth Forum in which he agreed that the 2017 law needed to be amended. Days later, the prime minister created a committee to review the 2017 law, host a series of national dialogue sessions, and put forth proposed amendments. After the dialogues—which were critiqued for failing to welcome the participation of human rights organizations—took place, the committee announced in April 2019 that it would instead draft an entirely new law to replace the 2017 law. In May, the cabinet approved the text of the draft law and on July 15, it was approved in a final vote by the House of Representatives; six members of the House voted against the draft law.

Summary: Egypt’s 2019 NGO Law governs the process by which domestic and foreign nongovernmental organizations (NGOs) can achieve legal recognition and sets forth provisions on their activities, oversight and monitoring, funding, and sanctions for violations of the law.

In contrast to prior laws, the law does away with all penalties involving jail time, and instead imposes fines ranging between 100,000 and 1 million Egyptian pounds, depending on the violation. Additionally, the law does away with the National Agency to Regulate the Work of Foreign NGOs, an entity created by Law No. 70 of 2017 to approve and monitor foreign funding and which had a heavy representation of security and intelligence personnel. Although both of these changes are improvements, this law still threatens to restrict civil society significantly; the following are particular areas of concern:

Significance: The 2019 NGO Law is significant in that it came about in the wake of widespread domestic and international criticism of the earlier 2017 law. The 2019 law contains two improvements: It cancels jail sanctions and does away with the security-heavy agency previously designated to approve and monitor foreign funding. However, the law furthers problematic restrictions on the right to freedom of association; it conceives of a narrow role for civil society, relegating it to the field of development; it significantly constrains the activities of both domestic and foreign NGOs, particularly under the pretense of national security; and it empowers authorities with expansive monitoring authority and broad discretion to regulate and dissolve NGOs. The authority of the Ministry of Social Solidarity to take punitive action against NGOs for what it deems to be violative behavior—only seeking court review after the fact—raises questions on the discretionary nature of this power.

Legal Context: The 2019 NGO Law replaces Law No. 70 of 2017, which replaced the Mubarak-era Law No. 84 of 2002. Implementing regulations for Law No. 70 of 2017 were never passed, creating a legal limbo which left many unsure as to which combination of law and implementing regulations governed the NGO space. The lack of clarity on legal obligations and the procedures under which NGO workers and members of civil society were expected to operate contributed to a climate of uncertainty, fear, and self-censorship.

Egypt’s NGO Law is not the only piece of legislation governing civil society work. Numerous laws—including provisions within the Penal Code, the 2018 media and cybercrime laws, the country’s counter-terrorism legislation, and the 2013 Protest Law—have articles which hinge upon broad terms like “terrorism” and “harm to national security,” empowering authorities to constrict the public sphere, shutter spaces for civil society work, and subject member of civil society to additional sanction.

December 2018 witnessed the acquittal of all defendants in Case No. 173, popularly known as the “Foreign Funding Case,” under which 43 foreign NGO workers had been convicted of receiving foreign funding, operating illegally without a permit, and encouraging social unrest. Despite those acquittals, a second phase of Case No. 173 remains open against domestic NGO workers. Under this phase, authorities have brought in dozens of members of civil society for questioning, have subjected at least 31 persons to asset freezes and others to travel bans, and have closed NGOs. In reliance on the December 2018 verdict, a number of individuals who have been subject to asset freezes are currently challenging the freezes in court; the appeal has been adjourned to September 14. Other cases continue to be levied against independent activists and members of civil society as well, including Case No. 621 of 2018, Case No. 441 of 2018, and Case No. 930 of 2019.

Political Context: Following its ratification, Law No. 70 of 2017 was widely criticized by both domestic and international parties, from civil society organizations to the United Nations High Commissioner for Human Rights. The European Union also publicly criticized Law No. 70 of 2017, calling it an “additional burden on NGOs’ activities.” In August 2017, the United States government withheld $195 million in military aid to Egypt in part because of the violation of a number of human rights conditions, including the passage of Law No. 70 of 2017. Although the law was not amended or repealed at the time, the funds were ultimately released in July 2018.

The 2019 NGO Law underscores Egyptian authorities’ attention to the international community’s perception of Egypt; in fact, before the final House vote took place and in order to gather members of the House for the vote, the Speaker stated: “The NGO Law is in need of a final vote due to the upcoming Universal Periodic Review and Egypt’s position.”

Prior to its ratification, ten Egyptian NGOs issued a statement criticizing the current draft NGO Law for being a “rebranding of the current repressive law.”

Implementation: The text of the 2019 NGO Law states that implementing regulations for the law must be passed within six months. The law also states that existing NGOs will have up to one year within the issuing of those regulations to bring their legal statuses into accordance with the new draft law.

Adherence to Legal Norms: Per Article 75 of the Egyptian Constitution, citizens have the right to form NGOs and the right to engage in activities freely. The same provision further states that administrative entities shall not interfere in the affairs of organizations, dissolve them, or dissolve their board of directors or board of trustees without a judicial ruling. Under its international and regional legal obligations laid out in treaties including the International Covenant on Civil and Political Rights and the African Charter on Human and Peoples’ Rights, Egypt is obligated to respect the right to freedom of association; the extent of these rights is further detailed in reports by the U.N. Special Rapporteur on the Right to Freedom of Peaceful Assembly and of Association and the ACHPR Guidelines on Freedom of Association and Assembly in Africa. Passing a law that places restrictions on the activities of NGOs, grants wide discretion to authorities in overseeing and dissolving them, and limits the ability of NGOs to engage with foreign actors stands in violation of Egypt’s domestic, international, and regional legal commitments.

Text of the Law: The official text of the law is available in Arabic here. 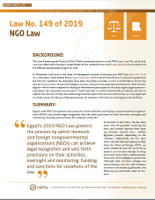